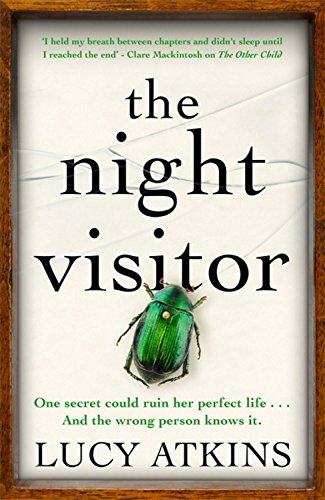 You have the perfect life … How far would you go to protect it? The Night Visitor is the third novel by award-winning author Lucy Atkins.

“But what will not ambition and revenge Descend to?” – John Milton, Paradise Lost, Book Nine.

Thus begins The Night Visitor, the third novel by Lucy Atkins, the award-winning author of The Missing One and The Other Child. And it is exactly that—a novel about revenge and ambition, about how far someone who has reached the top of their game has to fall, about the lengths one will go to stay at the top, and about the sorts of vicious acts one might engage out of spite for a lifestyle lost.

Professor Olivia Sweetman is at the top. She’s a well-known TV presenter and a noted historian with three children and a husband who has also reached a level of notoriety as a published author. But now, it’s Olivia’s turn to try her hand at publishing a book. The pre-publication buzz is already off the charts, guaranteeing that it will be a smashing success.

But Olivia has a secret that could bring this all crashing down around her. Vivian Tester, the rather odd woman who Olivia hired as a research assistant, is the only other person who knows the real story of how Olivia’s book came to be. It was Vivian’s Victorian Diary that inspired Olivia’s nonfiction account of Annabel Burley, one of Britain’s first female physicians and a woman who confesses in her diary that her husband’s death was no accident. The diary is one of a kind, a find unlike any other in history, and Olivia is lauded for its discovery and her perseverance in writing Annabel’s story. But it is Vivian who actually uncovered this diary, and it’s Vivian’s meticulous research that allowed Olivia to write the book as quickly as she did.

And while this might seem like a simple story at the outset—one woman taking credit for another’s work—it goes deeper than that. Far deeper. Vivian isn’t who she seems, and while she’s keeping Olivia’s secret, it turns out she has some dark secrets of her own. Olivia becomes increasingly paranoid, not only about Vivian but also about her own family and friends. It turns out that once you become a liar, it’s easy to suspect everyone around you of the same crime.

The novel is written from two points of view, oscillating from Olivia’s third-person narrative to a first-person POV of Vivian’s side of the story. One gets the sense that we’re merely meant to observe Olivia while also reading something that Vivian has written directly. It seems an odd choice, but as the story continues, it becomes obvious that this style of writing is integral to the plot. Atkins threads the story with a sense of foreboding as well, ramping it up as the book reaches its climax.

The hefty moon hung above the fields. Grey streaks of cloud travelled over her face and below her the flank of the Downs hunched like a smooth-haired hound. I could almost see it breathing. I was reminded how isolated the Farmhouse is, set all alone down a hobbling track, the nearest house well out of sight and sound. With the moon staring in and all the cows chewing and watching with their big, opaque eyes, even I felt exposed.

The Night Visitor is a battle of wills, not just between Vivian and Olivia but also within the minds of each of these two women. They both have choices to make and secrets to keep, and it’s that inner turmoil as well as their outward cat-and-mouse game that makes this novel so compelling. Who will break first? And what is the price they’ll pay for keeping those secrets buried? It’s a riveting and atmospheric story of morality and psychology that will keep you turning pages well into the night.