Review: The Night in Question by Nic Joseph 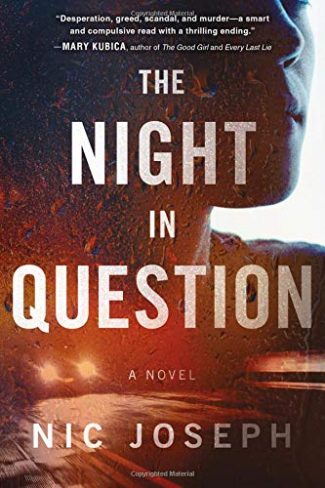 The Night in Question

The Night in Question by Nic Joseph is a suspenseful tale of desperation, opportunity, and ultimately murder.

When one of the most famous rock stars in the world leaves his phone in your car, you blackmail him when he asks for it back, right? Well, you do if you’re Paula, an artist who drives a car for Drive Away to make ends meet after an accident left her husband Keith unable to walk about a year ago. When she picks up international superstar Ryan Hook in her car one night, she gives him a ride home where a beautiful woman is waiting for him—a woman who is definitely not his wife.

Paula can’t stop thinking about her—the look on her face as she waited at the window and the illicitness of it all. It makes her think about how Keith’s accident has changed everything so much.

Whatever their relationship, that interaction—the expression on her face, the rigidness of his body as he stared up at her in the rain—had told me everything I needed to know about them. They were normal, and sexy, and infatuated with each other.

They were Keith and me—before the medications, the fear, the whiskey, the guilt, the sleepless nights.

They were us, before.

She doesn’t blame Keith for the accident, of course. In fact, she blames herself. Paula is the one that needed an extra ingredient for dinner and sent Keith out to Trader Joe’s. But, of course, she never could have imagined that a speeding SUV would send him into the path of an oncoming bus.

Keith was told he had a 3 percent chance of walking again—a devastating diagnosis that sent Keith and their marriage into a tailspin. There is a chance for hope, however, but it’s out of their reach. An experimental treatment might get Keith walking again, but the cost is $180,000. Paula is desperate for the surgery, but Keith isn’t so sure.

When she finds a phone in her car that belongs to Ryan, her curiosity grows, and she can’t help but drive back to the apartment where she dropped him off. During that drive, she recalls something her friend said when she told her that the Ryan Hooks’s phone was left in her car: You could sell it to a news site! I bet they’d pay a ton for Ryan Hooks’s cell phone.

This plants the seeds of an idea in Paula’s mind, and she soon finds herself snooping near the apartment where she dropped him off. She even finds herself meeting the girl she saw in the window in a dog park. Her name is Emma. And Paula, who introduces herself as Chris, can’t even believe what she’s doing as she chats her up, subtly trying to get details about Ryan out of her. It’s a slippery slope, for sure, but desperation should never be underestimated.

When Paula’s friend Vanessa asks Paula to go to Ryan’s concert with her and her teen daughter—and then scores a visit backstage—Paula sees an opportunity. When she tells him she has his phone, he’s delighted, but that delight doesn’t last for long.

To say Ryan isn’t amused is putting it mildly.

The anger was instant, visceral, and it made me take a step back. He covered it quickly, but I could still see it in his eyes.

But then, Paula ups the ante, for better or worse (at this point, I was guessing the worst). Ryan tells her no, and after a short standoff:

“You sure about that?” I asked, feeling more in control of anything than I had in the past twelve months. “The woman you went to meet on Saturday—I’m guessing there are a few pics of her on there that you wouldn’t want anyone to know about.”

His eyes widened, and then he ground his jaw as he stared at me angrily.

Oh, boy. Paula is definitely in it now. Her guilt and desperation over Keith’s injury and his resultant despair have led her down a dark road, but she doesn’t turn back. In fact, she ingratiates herself further with Emma’s crowd, and eventually—perhaps inevitably—it leads to her becoming a murder suspect.

The story alternates between Paula’s first-person narrative and that of Detective Claire Puhl’s murder investigation, so there’s a bit of jumping back and forth in time, but it creates a propulsive narrative that will have readers turning the pages. I found myself sympathizing with poor Paula, even as she gets herself in way over her head with no easy way out. I’d actually like to see a lot more of Claire Puhl—she could easily carry a series. This is a fun, suspenseful read, and Nic Joseph is an author to watch.