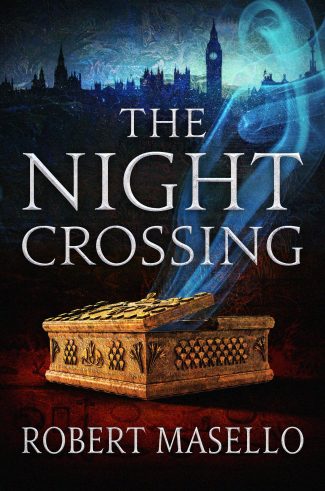 The Night Crossing by Robert Masello is a historical mystery featuring the famous author Bram Stoker.

Robert Masello steps away from his regular work, which includes some first-rate historically and supernaturally based fiction, and jumps full fledge into a realm of historical fiction that includes real and created characters operating together at a specific historic period in time.

The primary protagonist of The Night Crossing is author and theatre owner Bram Stoker. The story begins in 1895, two years prior to the release of Stoker’s most famous work, Dracula. As the novel opens, we find Stoker at his Lyceum Theatre taking in a production based on the Book of the Damned. Even then, the supernatural played a role in Stoker’s life, whether he recognized it or not. As things pick up in The Night Crossing, he will find himself plunged directly into the supernatural in his real life.

Our secondary protagonist is a woman named Mina Harcourt, who is part of an expedition to the Carpathian Mountains in Romania. It is here that she finds a golden box that will not open. During her passage back to London, she learns just how valuable the golden box is when people literally give up their lives trying to get it away from her.

Meanwhile, Stoker takes part in a rescue for a woman who fell into the river. The woman, Lucinda Watts, is currently living in a homeless shelter when Stoker gives her a job at his theatre.

The Night Crossing is filled with actual historical figures such as Sir Arthur Conan Doyle and Professor Arminius Vambery. It is during a dinner that Vambery fills Stoker with details of an ancient evil purported to the areas of Romania and Transylvania. He also learns of the existence of the Bucegi Sphinx, which has brooded on the mountaintop in this region. It is all Stoker can do not to pull out a pencil and take notes, as he feels this information would make for the impetus for a great story.

Things really get going when Stoker is invited to take part in a séance that is led by renowned spiritualist Madame Zukoff. It is during the séance that Stoker finds himself singled out by a spirit that claims to be an ancient soul who has come forth at this moment to issue him a warning. His intrigue from this séance will eventually find him crossing paths with Mina, who is able to fill Stoker in on actual events she experienced in the Carpathian Mountains and the gold box, which is soon stolen from her room in London.

Stoker and Mina join together in their pursuit of the box. Ancient texts claim that the holder of this box, along with other ancient relics, could cause the devastation of thousands of young souls. The target of their pursuit is a man named Thorne. Stoker and Mina are led to the underground area of London where many secrets lie. It is also here that Lucinda Watts claims to have had her baby stolen from her—all for use in some ancient ritual with which Thorne is involved. Fans of Stoker’s Dracula will take notice that the names of the female characters in this novel are similar to the characters of Mina Murray and Lucy Westenra, who were best friends that became victims of Count Dracula’s evil influence.

The Night Crossing jumps in time to the year 1912, 17 years after the action that took place prior. Stoker is older and living off the success of Dracula and other novels he penned in the supernatural genre. We will find Stoker once again teaming with Mina as they are both made aware of the fact that Thorne and his wife—purportedly dead in a house fire years earlier—are very much alive and seeking to take their ancient artifacts to America where they will unleash their evil plan in Upstate New York. The ship that they all purchase passage on for this crossing to America is none other than the ill-fated, unsinkable ship: the Titanic.

At nearly 500 pages in length, The Night Crossing could have benefited from some tighter editing, as the story drags a bit in the middle and the night crossing of the title does not occur until 400 pages into the story. Masello reflects in his Author’s Note that Bram Stoker never sailed on the Titanic—a fact that troubled me during the reading. Stoker actually died just days after the sinking of the Titanic—the death due to exhaustion but clinically diagnosed as tertiary syphilis.

The Night Crossing is a nice read and released just in time for the Halloween season. Ironically, Bram Stoker’s grand-nephew, Dacre Stoker, is releasing a prequel to Dracula entitled Dracul this October. It’s nice to see that well-written, literary horror/suspense novels are still alive and well.

See also: Back from the Un-Dead: Incorporating Bram Stoker into My Latest Historical Fiction