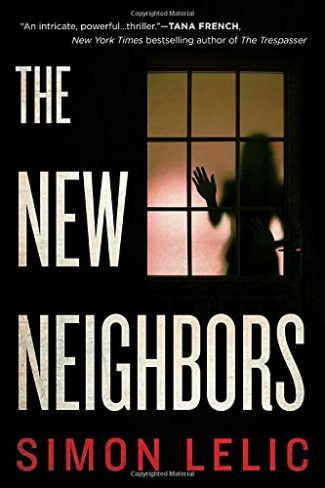 The Girl Before meets The Couple Next Door in The New Neighbors by Simon Lelic—a Hitchcockian thriller about a couple who moves into their dream neighborhood only to discover nothing is as it seems.

Jack Walsh and Sydney Baker are a happy-ish couple when they finally find an affordable home in London. It’s a bit of a fixer-upper, but after viewing and making rejected offers on no less than 12 other places, it’s hard to resist. Jack claims it was creepy and he didn’t really like it from the outset, but Syd did, and he wanted to make her happy. Hindsight is a funny thing, though. Little matter because they made an offer, and to their shock, they were approved. Turns out the owner liked the “sound” of Jack and Syd and gave them the house at a nearly $20,000 discount. Upon move in, one of the first things Syd and Jack notice is a certain smell, and although both agree that the underlying odor is a bad one, they look at it a bit differently. Here’s Syd’s take on it.

There were smoke smells on top of drain smells on top of book smells on top of something coming from somewhere that was vaguely floral. The jasmine, possibly, from the overgrown garden. And remember, it wasn’t as though we’d moved into an empty box. You know that smell when you walk into a library? Or a museum full of curious but empty of people? An old place, not one of those Millennium-branded buildings. It was like that, like a thriving marketplace of memories, where all the good smells mingle with the bad. The sweetness with the sweat, the sewage with the sage. Everything seemed … interconnected. The way an ecosystem is. So the point is, I really can’t tell you when I picked that one smell out from all the others, when I first noticed that coming from somewhere in the house was the scent of…

Jack’s take isn’t quite as eloquent. It’s death that he smells, and there’s a good reason for that. He tracks the odor to the attic where he finds a dead cat. It’s a disturbing discovery, but not because it’s dead. It’s in a strange place—one that would be hard to get to—and its back legs seem to be broken. He chooses to tell Syd that the dead thing was a pigeon, not a cat, by the way. Syd sure is lucky that she’s got Jack to save her from her own delicate sensibilities, because if it were me, I’d want to know if there was a dead cat with weird injuries in the attic of my new house.

But that’s just me.

Jack makes another odd discovery in the attic too: a box full of children’s toys, specifically stuff that seems to have belonged to a little girl. But, as far as Jack and Syd know, the owner didn’t have children.

Then come the noises. Jack isn’t sleeping so well. He wakes up one night, sure he’s heard something, but a search of the house turns up zip. When he gets back in bed, Syd utters something that chills him to the bone:

“Your hands are cold,” she muttered.

When I looked at her, she hadn’t opened her eyes.

“What?” I replied, turning more fully to face her.

She snuggled deeper. “Your hands,” she mumbled again. “When you touched my cheek. They’re freezing.”

She rolled onto her front then, and all I could see of her after that was the messy protrusion of her hair. I sat there, staring, my lips parted, and felt a drumbeat building in my ribcage. From feeling exhausted I was suddenly once again wide awake. You see, the thing was, I hadn’t touched her. Not when I’d got up, not when I’d come back into the room. Whoever’s hand she thought she’d felt—it wasn’t mine.

Things really escalate when Syd starts to hang out with the next-door neighbor, Elsie Payne, who’s only 13. They share secrets and cigarettes. When her father finds out, all hell breaks loose, and he takes it out on Jack. Then, there’s the body that turns up on their property and the knife that’s missing from their kitchen. Jack and Syd begin to spiral from there.

If you like a book that takes some unexpected turns, you’ll be delighted with this one. The back-and-forth narration between the two is a lot of fun. Are they unreliable narrators? Of course, they are. But Jack can a bit of a jerk. He doesn’t tell Syd important things (although Syd is guilty of this herself) and constantly points to Syd’s drug use to explain why she might have memory/other kinds of thought-process problems. It’s not cool, especially since it’s bogus and also a horrendous time of Syd’s life that she’d really like to forget. Nothing like your significant other reminding you of all the horrid things you’ve done, especially things borne of emotional pain. But Syd’s no saint, and she’s carrying around a huge secret that is brought to the surface by her friendship with Elsie.

Secrets are at the heart of this tale: family secrets and secrets that spouses keep from each other. Simon Lelic builds suspense like a pro, and although you may not fall in love with Syd and Jack, you’ll sympathize with them in different ways. Buckle up for a harrowing ride. Lelic is an accomplished author, and if you haven’t discovered his work yet, this is a great place to start.