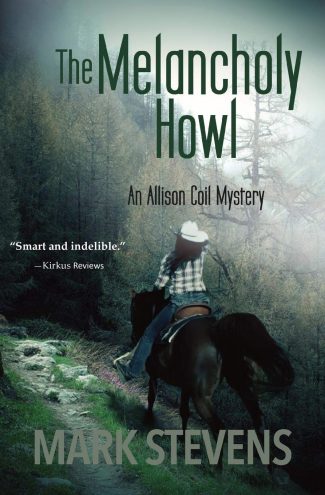 Mark Stevens’ fifth entry in the Allison Coil mystery series, The Melancholy Howl, skillfully braids interweaving threads of mystery as Allison and her friends test the definition of family and the dangerous boundaries of trust.

Allison Coil is a hunting outfitter in the Flat Tops Wilderness area of Colorado, having traded in city life for a much more bucolic setting. She’s reestablishing her relationship with her boyfriend, Colin McKee, after the disastrous events of the last book in the series, but is alone on a three-day ride when she goes to investigate an unusual circling of vultures. In a clearing in the woods, she finds a fresh deer carcass on the ground and a very angry man tied to a tree. He won’t tell her anything about himself or why he’s been tied up there, so a wary Allison leaves provisions within easy reach of him and heads to town to get backup.

Unfortunately, when she returns with cops and wildlife officers, the man is gone. At the urging of the authorities, she tracks him down to a crashed plane that she suspects was used to smuggle marijuana. To her horror, he’s been brutally murdered.

Stricken with guilt, she’s uncertain of what to do next. Then another complication arises: her old friend, the extreme survivalist Devo, has gone missing. Colin is more than willing to help her investigate both situations, as is Duncan Bloom, her reporter friend who finds himself traversing a fine ethical line as a business investment collides with his journalistic coverage. Duncan is especially worried about discussing his precarious financial state with his girlfriend Trudy Heath, who has transformed herself from cowed homebody to a mini-mogul of natural foods. Her success is such that the National Geographic channel wants her to host a TV show with Sam Shelton, a rock star who’s retired to grow produce in small-town Colorado. Sam is just as mesmerizing in-person as on stage, and Trudy finds herself falling under his spell when she knows she should really be helping her best friend, Allison, figure out just what on earth is going on in their patch of semi-tamed wilderness.

Allison, you see, feels compelled to investigate in part due to her somewhat complicated relationship with death. After surviving a plane crash of her own years earlier, she’s come both to accept death as an inevitable part of human existence and as the kind of thing that shouldn’t be bought cheaply:

Accidents in nature were one thing–rockslides, earthquakes, tsunamis, tornadoes, hurricanes, floods. Man-made accidents were another–from a tractor rolling over a lonely farmer on the back forty to an icy pileup of cars and trucks on a foggy highway, from a train leaving the rails to an airplane unable to sustain flight. They were all part of nature now–death by car crash was as “natural” as a rockslide.

The precarious perch on life was jittery enough, given all the risks, without men killing men. And Duncan Bloom’s speedy recap of the [situation] made her realize, not for the first time, that not much made less sense than taking another man’s life because he stood in the way of your trivial mortal wants and desires.

This sense of justice drives her not only to see through the investigation into the dead stranger, but also into what really happened to Devo and his band of regressive naturalists. In all this, she’s ably helped by Colin, Duncan and Trudy, despite the inevitable distractions their own lives throw into the mix.

A large part of the charm of The Melancholy Howl is in reading each different plotline and marveling at the authenticity. Whether discussing marijuana growth, sexual assault survival or journalistic practices, each topic is presented with an authority and sympathy that still leaves room for humor, as here where Duncan is chasing down a lead:

Duncan attacked the phones. He checked again with all his usual sources and asked each and every one for additional suggestions for names to call. He chatted up “public information officers.” He cajoled “directors of communication.” He shot the breeze with “communication specialists.” All said zilch. He played relaxed, unhurried. “Just chatting.” “Called to see what’s new.” “Good try,” said Deputy Chadwick. “I showed your pals Allison and Colin the same frozen shank of shoulder.”

Nobody would go off the record. A hint of arrogance came with each rebuff. These “get lost” messages had been prepared in an underground bunker in an undisclosed location in the northern nether regions of Norway on the coldest day in January. Then, they were given a quick coating of charm school gloss and repeated to the point of nausea. Everybody was not only on the same page, they were on the same fucking note.

Of course, the newsroom scenes should be convincing: Mark Stevens is a vastly experienced reporter himself, whose keen journalistic eye serves him in good stead as he turns his hand to writing crime fiction that is as topical and deeply felt as it is wildly entertaining. Allison is a unique creation in modern detecting, a woman who chose a life in the wilderness who nevertheless feels compelled — and believably so — to assist in the untangling of the criminal plots that arise on the edge of civilization. Her adventures, though fictional, present an authentic portrait of life out in the present-day Colorado Rockies in all its complicated glory.