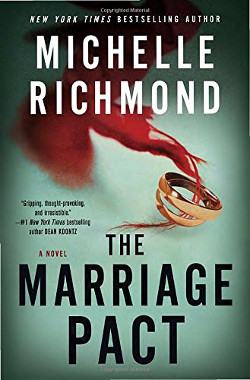 The Marriage Pact by Michelle Richmond is a relentlessly paced novel of psychological suspense that asks: How far would you go to protect your marriage?

There was something about the description of The Marriage Pact that was so intriguing. The idea that a young couple, still newlyweds, are tempted and intrigued by a very appealing, all-encompassing opportunity, one that combines the personal and the professional … but with a darker side. It actually reminded me of the movie The Firm, based on John Grisham’s 1991 legal thriller. It’s quite a cinematic premise.

The goal of The Pact seems simple: to keep marriages happy and intact. And most of its rules make sense. Always answer the phone when your spouse calls. Exchange thoughtful gifts monthly. Plan a trip together once per quarter.  . . .  Never mention The Pact to anyone.

Alice and Jake are initially seduced by the glamorous parties, the sense of community, their widening social circle of like-minded couples. And then one of them breaks the rules. The young lovers are about to discover that for adherents to The Pact, membership, like marriage, is for life. And The Pact will go to any lengths to enforce that rule. For Jake and Alice, the marriage of their dreams is about to become their worst nightmare.

And it seems that I was not the only one intrigued—on July 24th, 2017, Variety broke the story that The Marriage Pact has been acquired by Fox Chernin. Coming to a theater near you!

The story opens with an injured, confused Jake. He’s in a private plane, there’s blood on his shirt, and he doesn’t know how he got there. The taciturn pilot drops him off at the small Half Moon Bay Airport. Jake desperately wants to see his wife Alice, who’s still at work. After she gets his text, she tells him she’ll leave in five.

“At least you’re in one piece.” She reaches up and touches my jaw gently. “What happened?”

I wrap my arms around her.

“So why were you summoned?”

There’s so much I want to tell her, but I’m scared. The more she knows, the more dangerous it will be for her. Also, let’s face it, the truth is going to piss her off.

What I’d give to go back to the beginning—before the wedding, before Finnegan, before The Pact turned our lives upside down.

Alice is a former member of a rock band who's now an up-and-coming lawyer. Jack is a psychologist in practice with two others, and things are going well for their fledgling partnership. A few weeks before their wedding, a mysterious gift arrives. It’s a present from Liam Finnegan, one of Alice’s firm’s most important clients. Two beautifully carved boxes. The first containing a fabulous pen. The second, well, Jake’s not sure:

It had the same reclaimed wood, the same fancy hardware, and the same logo branded across the front: THE PACT. It was surprisingly heavy.

I tried to open it, only to discover that it was locked. I placed the box back on the table and searched through the packaging, looking for a key. At the bottom, I found no key, just a handwritten note:

Alice and Jake, Congratulations on your wedding! The Pact will never leave you. Cheers, Liam.

I stared at the note. What could it mean?

After they receive the unexpected gift, Jack and Alice decide to invite Finnegan and his wife Fiona to their wedding in the northern California countryside. Surprisingly, the older couple accepts and has a marvelous time. Liam texts Alice afterward, telling her they “were honored to be part of your special day.”

“Fiona says that you and Jake remind her of us from twenty years ago,” she read. “She insists you come stay with us next summer at our place in the North.”

“Wow,” I said. “It sounds like they actually want to be friends.”

“Lastly, the gift,” Alice continued reading. “The Pact is something that Fiona and I received for our own wedding. It was left on our doorstep on a rainy Monday morning.”

After their honeymoon, Alice and Jake are told a woman named Vivian is going to visit them to explain The Pact. They are more than intrigued. Finnegan had asked them questions about their marriage goals, and it seems that they passed some sort of test. They felt like they were waiting to interview for a job they hadn’t even applied for:

Between the box and the pens and the cryptic emails, Finnegan had made it sound so appealing—and, I’ll admit, so exclusive. At her heart, Alice is a true overachiever; anything she starts, she wants to complete. Anything she completes, she wants to win—whether it’s good for her or not.

Exclusive, appealing, an overachieving wife who wants to win at any cost—what could go wrong? The truism, “If it’s too good to be true, it probably is,” shimmers from the beginning. The Marriage Pact is a quintessential page turner; there’s an incipient sense of dread from word one. Readers will surely succumb to temptation and plunge in.