Review: The Man Who Couldn’t Miss by David Handler 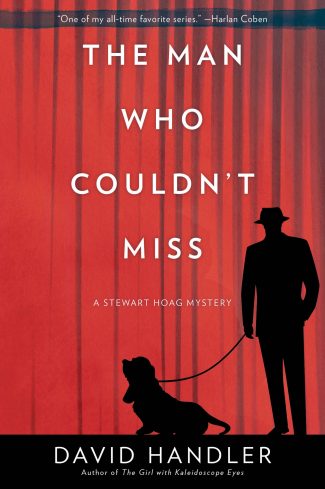 The Man Who Couldn't Miss

The Man Who Couldn’t Miss by David Handler is the 10th book in the Edgar Award-winning Stewart Hoag Mystery series, where Hoag and his beloved basset hound, Lulu, investigate a murder in a fabled Connecticut summer playhouse.

The summer of 1993 should be the most exhilarating time of Oscar-winner Merilee Nash’s life. She’s “directing a gala benefit production of Private Lives to rescue the famed but dilapidated Sherbourne Playhouse.” The fly in the ointment is R.J. Romero, a sketchy more-than-acquaintance from her Yale School of Drama days, who is blackmailing her. Successfully, as she ruefully shares with her visiting ex-husband, Stewart “Hoagy” Hoag. She fed R.J. ham and eggs, topped off with ten thousand dollars. Alas, giving into blackmail results in more demands.

“I’ve just made a mess of things instead.”

“Not necessarily. And don’t furrow your brow or you’ll get lines.”

Merilee got up, poured us more coffee and sat back down at the table, gazing out the window. “Plus I really, really don’t need this right now. We go out on that stage tomorrow night live in front of the likes of Mike Nichols and Arthur Miller. Jackie O is going to be there. Everyone is going to be there.” She heaved a smile of profound regret. “And by the time the curtain falls my very short directing career will be over.”

“Because we’re simply not ready to go on. We need to rehearse all night tonight, and even that won’t do the trick.”

Merilee confesses why she’s being blackmailed and is worried that if she doesn’t come across, R.J. will throw her under the bus when the police inevitably catch him. Ever chivalrous, Hoagy tells her he’ll put his work-in-progress on hold to monitor the situation.

I heard a low growl from under the table. “We’re keeping an eye on you. I’m also going to arrange to have lunch with Bruce Landau.” My high-powered New York City lawyer was summering nearby on the shoreline in Guilfoyle.

“What can Bruce do?”

“He has good contacts. He knows people.”

“What about your novel?”

“My novel can wait.”

Rather than risk being thought a “clingy female,” Merilee has embraced a world of trouble. Fortunately, Hoagy and “his faithful and cowardly basset hound” Lulu have her back. Hoagy tells Merilee to focus on the benefit performance and that he’ll deal with R.J.

There are elements of The Man Who Couldn’t Miss that elevate it above simply an enjoyable summer-stock-setting whodunit. David Handler’s Stewart Hoag is reminiscent of Robert Parker’s Boston sleuth, Spenser. For both men, brains always trump brawn—although neither is averse to using violence if it comes to that. Hoagy prefers win/win solutions when dealing with miscreants. Sometimes, criminals don’t agree, like when R.J. rips up a first-class, one-way plane ticket to Mexico (and a check) rather than agree to stop blackmailing Merilee. Like Spenser, Hoagy carries a torch for his lady. Both also have their faithful canine companions: Hoagy’s basset hound, Lulu, is a great help to her crime-solving master, as is Spenser’s Pearl the Wonder Dog. Finally, Spenser is “well educated, cooks, and lives by a code of honor,” much like dapper Stewart Hoag.

New Yorker Stewart Hoag embodies the spirit of stylish male writers like Truman Capote and Tom Wolfe in his sartorial choices. He’s not looking to blend.

. . . I set up a lunch date with my lawyer, Bruce Landau, showered, stropped grandfather’s razor, shaved, powdered my neck with Floris No. 89 talc and dressed in the new white linen suit from Strickland & Sons, a pale blue shirt, polka-dot bow tie, perforated spectator balmorals and my snap brim fedora.

Summer stock playhouses were and still are a feature of New England summer vacations. Many famous actors got their start in summer theater. Merilee’s quest to raise money to refurbish her local playhouse recalls the Westport Country Playhouse in Connecticut, which was “renovated with the support of Joanne Woodward and Paul Newman” and was part of the summer stock circuit.

Go back to a glamorous past in The Man Who Couldn’t Miss, a world populated by legends, stars, and feuds, all sprinkled with fairy dust.

The incomparable husband-wife acting duo of Hume Cronyn and Jessica Tandy showed up. So did that pretty fair husband-wife acting team of Paul Newman and Joanne Woodward. Newman was sixty-eight that year, and I just want to say if I ever live to be that old I want to look as good as he did.

Even Kate Hepburn is in the audience, shouting in the face of the vile weather that graces the benefit performance, “By gum, this is a perfect night to see Noël Coward!”

David Handler’s story is full of “laughter and genuine excitement” as well as pathos and tragedy. Mick Jagger, a contemporary of Merilee and Hoagy, said in 2001, “The past is a great place and I don’t want to erase it or to regret it, but I don’t want to be its prisoner either.” So apropos. Merilee, with Hoagy’s help, must confront her past to break free from its constraints.