Review: The Man Who Came Uptown by George Pelecanos 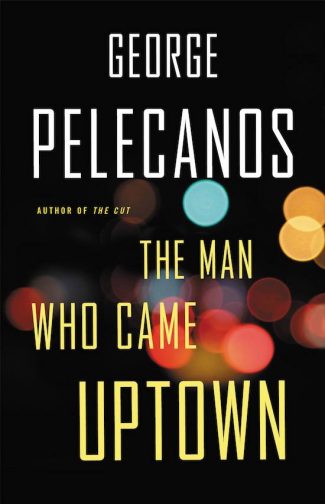 The Man Who Came Uptown

The Man Who Came Uptown by George Pelecanos brings Washington, D.C., to life in a high-stakes story of tough choices, where an ex-offender must choose between the man who got him out and the woman who showed him another path.

The king of D.C. crime, George Pelecanos, is back with a standalone wonder in the vein of The Way Home, beginning with one man and spinning a small web of connected characters as a drama unfolds. “The Man Who Came Uptown” is Michael Hudson, a boy from a good family led astray by foolish friends. He’ll get a chance to make things right, but only if the people who gave him that chance will let him.

But Hudson is only one small part of the story—if a pivotal one—which references and draws on John Steinbeck’s Of Mice and Men, noting that Steinbeck “wrote his books so the people he wrote about could read them,” which is a blinking red light telling us what Pelecanos is up to here. The love of books is what links jail librarian Anna and Hudson, and her reading groups with inmates are an enjoyable centerpiece. We also meet ex-hardcore band member Phil Orzanian, who went on to become a lawyer’s investigator, and Thaddeus Ward, the ex-cop turned security provider and bail bondsman. The two have a side hustle robbing pimps and sex traffickers for cash.

If his mother only knew the stuff he was into at an early age. He’d had sex with a girl when he was eleven, the kind of neighborhood gal who liked to get with boys who were inexperienced. Soon after, at twelve or thirteen, the bad started. The usual trouble that some young men find. Stealing things you didn’t need from stores and unlocked cars. Fights. That swell of adrenaline when you stepped to someone. Sometimes he was the aggressor and sometimes not. Most confrontations you couldn’t walk away from ’less you wanted to be labeled a punk. Which got him suspended from school a couple of times. Put him in a cycle.

I began this book on the foot of the mini-Twitterstorm over the author’s brief New York Times promotion piece where he was asked to name favorite writers of past and present and was called out by Lauren Groff for naming no women. I was quite surprised myself, as Pelecanos is the creator of The Deuce, where he works with great writers Lisa Lutz and Megan Abbott. Something seemed off. Other fans mentioned that Pelecanos has recommended women before, and sure enough, as the book goes on, he recommends and quotes several authors. Elmore Leonard is first, with Swag and Valdez is Coming; then Steinbeck, Willy Vlautin’s Northline, Gillian Flynn, Nora Roberts, and a big shout-out to The Passenger by Lisa Lutz.

So it’s not fifty-fifty, but women writers do get mentioned, and respected, in a story about the transformational power of … story. Michael Hudson doesn’t dwell on what makes him want to do right when he “comes uptown,” D.C.-jail slang for getting out, but he loves books and how he can escape into them. He was free when he read books as he waited 23 months for trial. And as he works a minimum wage job and tries to do right, he keeps escaping into books, building a bookshelf of beloved stories—a dream with which every reader can identify.

It’s also a way to recommend a dozen or two books that you love, from True Grit to Wallace Stroby’s Crissa Stone novels. Lutz and Stroby get recommended to an inmate who “wants to figure out how women think,” and as always, Pelecanos humanizes his characters without making them patronizing caricatures. He knows criminals, on all sides of the law, and his stories always ring true.

Pelecanos writes with the relentless energy of Richard Stark, with brief interludes to paint landscapes of character that are nearly as compelling. The story is cleanly cut into three parts, centering on Phil Orzanian and Thaddeus Ward’s robberies, which are satisfying, as their targets are people we like to see get punched in the face. Ward references the infamous “Nazi punching” incident that went viral, saying that the Nazi deserved it for coming to his city preaching hate, and the robberies have the same catharsis. Pimps, sex traffickers, and white supremacists aren’t going to engender any sympathy from the reader, but we don’t expect them to take this and not retaliate. So the sense of impending doom grows as Ward and Phil become more daring and threaten Michael Hudson into driving for them.

His asides feel inspired by The Wire or The Deuce, brief history lessons, such as why the African-Americans of D.C. stood by Marion Barry, delivered by a mailman friend of Hudson’s:

Barry and a partner, Mary Treadwell, started this company, Pride Incorporated. It was set up to put black men to work, doing stuff like pushing brooms, picking up garbage…basically, cleaning the city up. Doesn’t sound too good, but it was work for men who were chronically unemployed. Why they gave it that name. It gave men back their pride.

“My father worked for Pride Incorporated and I saw what it did for him. It made him stand straight. As a kid, I saw by example that this is what a man does. He goes to work every day and he takes care of his family. I knew that, soon as I could, I would go to work too.”

Anna and Michael meet on the outside, and she is bored by her suburban husband, who wants to leave D.C.; there is romance there, but they both know it won’t work. The story never goes where I predicted, never takes the easy way out, and it remains unerringly compelling. That is the hand of a master, even if he paints with Seurat-like points of color, giving us the big picture of his beloved Washington, D.C., as we step back and admire the work.

I greatly enjoyed the Derek Strange and Spero Lucas books, but these lean standalones have been my favorites of Pelecanos’s. I like this one even more than the equally well-crafted, blue-collar prison-redemption tale The Way Home, as it is more realistic and somehow more thrilling as well. The Man Who Came Uptown could be a season of television, binged in a single sitting. But like the best series, you’ll want to go back and enjoy it again.