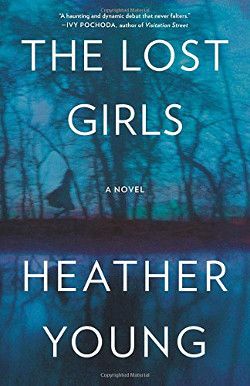 The Lost Girls by Heather Young is a stunning debut novel that examines the price of loyalty, the burden of regret, the meaning of salvation, and the sacrifices we make for those we love. It has been nominated for an Edgar Award for Best First Novel.

Heather Young lulls her unsuspecting readers along, then slips the noose about our necks, and all that’s left to do is succumb to her haunting little tale. We are not to blame for forgetting—if it’s possible—the title, The Lost Girls, and the image of the young child on the cover running into the darkening woods, vanishing into the fog. Keep that in mind, while taking in Lucy Evans’s recollection, and decide which genre it sounds most like:

I imagine we don’t seem unusual to you as I’ve described us on that first summer day. We were an oldest sister growing up, and a middle sister being left behind. A youngest sister wanting to belong. A father watching a boy who flirted with his daughter. Nothing you wouldn’t see in countless other families. But if I am to tell you the story of what happened to us, I must start at the beginning. And in these few things, ordinary as they may seem, lay the beginnings of everything that came after.

Wouldn’t suspect thriller or mystery, right? Perhaps more literature in nature, given an image of family life that could be the makings of a Norman Rockwell painting for The Saturday Evening Post. How about a lead-in to a Reader’s Digest article on sibling rivalry? More accurately, what unfolds is similar in tonal approach to David Lynch’s Twin Peaks just before the perfectly beautiful veneer is pulled away—only The Lost Girls is not so quirky.

In 1935, Lucy is the middle daughter looking up to her big sister Lilith, who ignores her, and finding her youngest sister to be nothing more than the usual, at times, annoying pest. They are enjoying their vacation home overlooking a Minnesota lake. It’s everything childhood should be until it’s not.

Emily Evans, 6, daughter of Thomas and Eleanor Evans of Williamsburg, was reported missing from her family’s summer home at Stillwater Lake this past Sunday.

The Evanses were set to return to Williamsburg that morning, but the child wasn’t in her bed when they woke up. Search parties have found no trace of her in the nearby woods.

Williamsburg sheriff Merlyn Llewellyn believes the child ran away from home. Some of her clothes are missing, as well as other personal belongings, he said. According to Agnes Lloyd, wife of Mayor Robert Lloyd, whose family was vacationing with the Evanses, the child has tried to run away before.

Sixty years later and close to the end of her life, Lucy begins to write down everything surrounding the pivotal events of that time for her grandniece Justine—a relative that Lucy hasn’t seen since Justine had visited as a kid years before. Lucy writes, “I realize I’m writing to a nine-year-old girl who lives only in my memory.”

The adult Justine has come to an unexpected crossroads: she believes her husband Patrick has staged a break-in at their home as a means of manipulation in their relationship. She considers him overall to be a good man and father to her two daughters, but when Lucy decides to leave the lake house to Justine (and $150,000 in an investment portfolio), she jumps at the chance to start her life over, picking up her kids after school and heading to the place of her youth that she fondly remembers, “The lake house had been the color of butter in the sun.” The past and present beguilingly begin merging as secrets are revealed.

Ms. Young has written a compelling narrative about the unpredictable currents in lives and how the problematic tidal waves of earlier generations are never far from over and done. Author Ivy Pochoda says The Lost Girls is a “dynamic debut that never falters.”

Very true. Seek out The Lost Girls and enjoy a powerhouse.