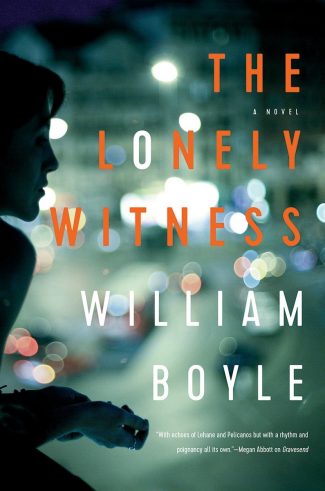 Character-driven and evocative, The Lonely Witness by William Boyle brings Brooklyn to life in a way only a native can and opens readers’ eyes to the harsh realities of crime and punishment on the city streets.

When a writer has a good premise for a novel, they can develop that premise in various ways. Should plot construction—complete with twists and reversals—be paramount? Maybe the premise should be the launching point for character exploration, a look at how the story’s characters react and evolve in relation to the novel’s catalytic event. How important a role will the setting play? Will it be a character in itself, helping to determine how the people moving through it think and act? Or will it serve as a mere exotic backdrop to action and intrigue?

In William Boyle’s second novel, The Lonely Witness, he begins with an excellent premise and teases it out wonderfully, maximizing its potential. He integrates plot, character, and setting with calm assurance, and the result is a beautifully nuanced novel that has an unhurried but compelling narrative drive, a central character you are totally invested in, and a locale—the Gravesend neighborhood in Brooklyn—that does indeed function as a major character, interacting with and psychically affecting each and every person in the book.

The Lonely Witness centers on Amy Falconetti, a woman in her mid-30s. You will know Amy a little bit if you’ve read Boyle’s earlier novel, Gravesend, in which she appears. In the new book, Amy has put her bartending and partying days behind her and is living quietly in a basement apartment she rents. Despite her relative youth, she is an old soul—to the point that she still uses a flip phone—and she spends most of her time with elderly people.

Amy devotes her days to bringing communion to old people who can’t get to their local church, St Mary’s, anymore. After her years of debauchery, Amy has rediscovered a spiritual side of herself that she had when younger—she had loved St. Therese as a little girl and enjoyed reading books about her—and she has “decided she wanted to do something helpful. She wanted to help. She’d spent enough time not helping.” It’s mostly old ladies she administers communion to, and since they are housebound, she provides not just communion but essential company for them, conversation. Maybe it stems from her bartending days, but Amy is a superb listener. She has her memories, some of which haunt her, and she has still not completely gotten over her last relationship—with Alessandra, who was also in Gravesend—but Amy has a genuine interest in the people she helps.

At the same time, she has a vague sense of emptiness inside, dissatisfaction. For five years—living in her cellar, attending church, sitting with aged parishioners in their shabby, cluttered rooms—she has been in a sort of holding pattern. But Amy is a seeker, and something has to give. The internal pressure in her, a feeling she only half-acknowledges, is increasing. Beyond the succor she gives to others, she needs something to fill the void inside.

When one of her regulars, with reasonable suspicion, says that the son of her caretaker might have done harm to his mother, Amy decides to look into it, and she follows the grown son, Vincent, through their neighborhood. Vincent seems volatile and dangerous, but the story takes an unexpected turn after Vincent meets a man in a hoodie outside a local bar and the two men walk off together. Amy witnesses a fatal stabbing, but instead of reporting the crime to the police, she takes the weapon from beside the body after the killer flees. From this point on, something of a stranger to herself, Amy does nothing anyone else would consider conventional, or safe. On the move constantly, she plays cat-and-mouse with the killer.

She also has to deal with a difficult father, her ex-lover, and the nagging thought that she may be wasting her life. While suspense builds for the reader, existential anxiety builds for Amy, and the reader sits back to surrender oneself to William Boyle’s rhythmic prose:

She stands there. She puts on her flats. She paces. She thinks about what she would’ve done when she was twenty-five or twenty-eight. She would’ve gone out. She would’ve headed straight to the bar. Shots. Beer. Music. She wouldn’t have felt intimidated or regretful. High school had taught her that, and everything with Bob Tully. No way was it wrong to chase a feeling, to be unhinged, to act out of fear and fascination. How did she lose that knowledge? Whatever she’d gained had led to so much lost.

She leaves her apartment as someone else. Or someone she used to be.

At one point, in another person’s house, Amy finds and takes a chain with a Joan of Arc medal attached. It’s a reminder, again, of the spiritual element coursing through the book and a reference to Amy herself: her surname, Falconetti, is the last name of the actress who played Joan of Arc in Carl Dreyer’s silent film from 1928.

Boyle is a writer who brings a lot of influences to his novel, but he never makes them obvious, as many writers do. In her proclivity for following people and getting involved in the lives of others, Amy has something of Patricia Highsmith’s characters in her. In how she inhabits a dank room and gets quite excited to change her hair color, thinking a wig will change her persona, she may remind one of Sasha Jensen from Jean Rhys’s Good Morning, Midnight. I could go on with the references, but suffice it to say that Boyle draws as equally from what’s considered literary as he does from crime fiction.

And then, there’s his visual side—his ability to describe a location and evoke a mood from that description. Boyle knows the city he is writing about and how an act as simple as waiting for a subway train can produce deep melancholy.

She runs down to the southbound platform, still watching over her shoulder. The station is lonely and sad. Not underground and not the El, it’s one of those ground-level N-line stops she doesn’t know the name for. Open-cut maybe. Concrete walls. Blue columns. Graffiti. Tracks that seem extra desolate. Yellow lines to keep you from standing too close. Garbage overflowing out of cans. Noise like silence. She can look up into apartments with torn shades and child safety bars on the windows. She can see clotheslines and telephone wires. She’s sure she heard a story, not that long ago, of a man hanging himself here. She can’t help but wonder where. From which exact beam? She stands and waits for the southbound train. She waits for the black N in the yellow circle in the distance.

In the novel’s penultimate chapter, Boyle switches gears slightly, mixing the melancholy with the absurd. All the major characters come together, and in the midst of a life-or-death situation, including a chase, the action becomes almost madcap. The stakes are high, and people get hurt, but you find yourself laughing at the ridiculousness. Boyle goes right to the edge of farce without tipping over into it, and the reader throughout is kept off balance while experiencing suspense. It’s a risky thing to do in a climactic chapter, but he pulls it off.

The Lonely Witness is a novel that yields a number of pleasures, and I can’t think of a reason not to recommend seeking them out.