Review: The Lies We Told by Camilla Way 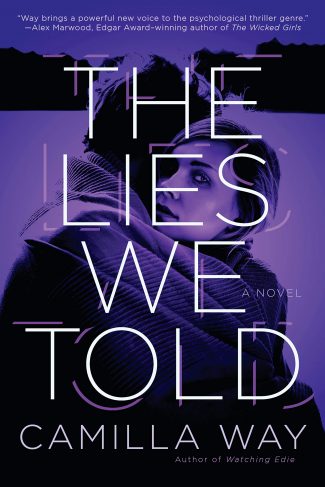 The Lies We Told

The Lies We Told by Camilla Way is a novel of dark psychological suspense that explores how those closest to us have the most to hide.

Camilla Way’s The Lies We Told has one of the most accurate and appropriate titles in recent thriller history. The plot is a multilayered maze of lies, half-truths, secrets, and vengeful agendas that converge in unexpected ways. Full of emotional grit and uncertainty, this is the kind of novel that explores how people can do horrible things for the right reasons and how even short-lived infidelities can sometimes have lingering effects.

There are three main storylines in this novel. One takes place in the late ‘80s to mid-‘90s, and two take place in the present. The first is Beth, a concerned mother who always knew her daughter, Hannah, wasn’t normal. In fact, Hannah’s utter lack of emotion and the way she seemed to take pleasure in hurting others made Beth think she was slightly sociopathic, and she feared what her daughter could be capable of.

Then, there’s Luke—a young man from a respectable family who seems to be a loving, caring boyfriend—and his girlfriend, Clara. When Luke disappears, Clara seeks answers. In the process, she discovers the man she thought she knew so well was just an illusion. She also learns that Luke’s recent stalker might be more serious than they thought. With Luke’s life in the balance, Clara and Luke’s family and best friend struggle to get to the bottom of his disappearance, but they are dealing with too many old secrets and not enough straight answers.

The Lies We Told is a novel that contains so much, giving only one of its secrets away would spoil much of it—which makes discussion difficult. That being said, there are some elements that work very well and make this a recommended read.

The first is the emotional anguish. Luke’s disappearance affects all those who knew him. Even after his dirty secrets are aired and his flaws are exposed, there is a part of the reader that still hopes he is okay, mainly because of the pain of those suffering due to his disappearance. Also, the way the author manages to keep the big reveal under wraps for three quarters of the narrative—not to mention the fact that the novel doesn’t end right after the big reveal—says a lot about the amount of time and attention to detail that went into creating the plot.

Another element of The Lies We Told that merits attention is the way it sometimes slides away from being a psychological thriller and dips its toes into the realm of horror. Hannah is the quintessential creepy child in horror narratives. There is one incident her mother remembers that serves as a perfect example. When Hannah was 12, a new neighbor came to the house to introduce herself. When she left, Beth said goodbye to her at the door and turned to find Hannah standing on the stairs, watching them intently. Later, she went to her room:

One element that walks a fine line between being superb and being the only thing that bogs down the narrative is the attention to detail. When it comes to emotional grit and conveying the desperation of Luke’s family as well as Clara, Way shines:

Clara felt as though a balloon were slowly expanding inside her chest. Whenever she checked her watch, time seemed to have stood still, though it felt like hours since last she’d looked.

However, there is also a lot of unnecessary information that impacts the pace. Excessive detail and repetitive descriptions of places and feelings start to get a bit old toward the second half of the narrative’s third act. It’s not bad enough to detract from the overall quality of the novel, but it’s present enough to be a bit of a nuisance at times.

Despite that tiny flaw, The Lies We Told is a superb psychological thriller that packs a great cast of multidimensional characters and a deep, nuanced exploration of the ramifications of lies as well as the lasting impact infidelity can have on everyone involved. Way is a talented author who cares about showing the multiplicity of ways humans react to scary, dangerous, and heartbreaking situations. In this novel, she also does a fantastic job of communicating the way the loss of a loved one affects our psychology and exploring the desire for children when having a baby the natural way isn’t possible. Those who enjoy their narratives dark and intricate shouldn’t skip this one.