Review: The Last Thing I Told You by Emily Arsenault 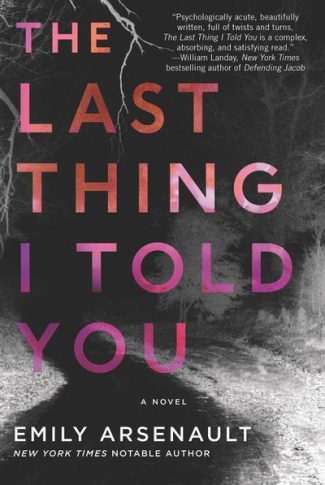 The Last Thing I Told You

The Last Thing I Told You by Emily Arsenault is a psychological thriller about the murder of a psychologist in a quiet New England town, told from an unreliable former patient.

There is something beautiful about a talented author working at the top of her game—an author who can deliver a multilayered narrative from different points of view and switch between past and present without a hitch.

This type of strange literary beauty can be found in Emily Arsenault’s latest effort, The Last Thing I Told You. It is a psychological thriller, a study in the aftereffects of trauma, and a look at the way violent secrets can have lingering consequences. The Last Thing I Told You cements Arsenault as a top voice in thrillers and—following the success of The Broken Teaglass, In Search of the Rose Notes, Miss Me When I’m Gone, and What Strange Creatures—proves that she gets better with each book.

Dr. Mark Fabian will never see another patient for therapy because he has been killed by blunt-force trauma in his office. However, that doesn’t mean he is entirely gone. For example, Nadine Raines—a former patient who came to him after a violent outburst at school many years before—still talks to him in her head. Nadine, who is back in town after years away, has a lot of issues in her past that she needs to work through. At the top of that list is her relationship with Dr. Fabian, who was there at a time in her life when dark impulses were inexplicably at the center of her life.

While Nadine talks to a dead man in her head, local detective Henry Peacher investigates the therapist’s violent death. He discovers that the doctor had pulled the files of two former patients before being bludgeoned, but he fails to see a connection between them. One of the files he pulled was on Nadine, who went to school with Henry, and the other was on Johnny Streeter, a man who is serving a life sentence for a mass shooting at a local retirement home five years ago. The shooting, which left the town devastated, made Henry a hero. However, he wants to put all of it behind him and focus on his wife, two daughters, and career.

Unfortunately, the files the doctor pulled bring up a series of questions, and he is forced to stir up the past. What follows is a tense, fast-paced narrative about the echoes of an awful event and the bizarre connection between Nadine and Streeter, both of whom suffered from mental illnesses that were deeper and stronger than they appeared all those years ago.

The first thing that stands out about this novel is the juxtaposition between its main characters. Henry is likable. He’s a father, an honest man, and a local hero. It’s easy to feel a connection with him and to wish him luck in his investigation. On the other side is Nadine. Sure, she seems strange, violent, and full of problems. However, as the story moves forward, readers will start to learn more about her past, and that forces perceptions to shift until the line between likable and unlikable is blurred.

Arsenault uses a variety of forms to deliver the story, including old doctor’s notes and things written by Nadine as part of her treatment. This allows readers to see inside her thought process and try to elucidate what is going on in her head. Her head is a twisted place where unexplained desires, bizarre motivations, and a strange attraction for Dr. Fabian reside:

I’d wondered since the very beginning, if you had seen this about me. How do you somehow seen, in your infinite psychological professionalism, that this desire danced up and down my veins, redder and more vital even than blood—this wish to expose, and be exposed? This wish to see the shock register in your face, to see you try to hide it, to smile all the way home at the thought of it?

The second element that merits attention is the novel’s readability—that ineffable and very elusive element that is only rarely found in fiction. Simply put, this is a 416-page novel that reads like a 120-page novella. Sure, relatively short chapters, notes, and lots of dialogue have something to do with that, but it mostly comes from the author’s ability to push a complicated, time-shifting plot forward without ever slowing down.

Lastly, this novel clicks with the ongoing violence in this country in profound ways. At one point, Henry is imagining a conversation with Dr. Fabian in which he discusses how he feels about the Streeter shooting. He focuses on his daughters, on the possibility of them encountering violence outside the house, and what he says resonates with current events in lasting ways:

It would not be about those three souls on the third floor. It should be, but it wouldn’t be. It would be about Sophia and Olivia. It would be that every day I think about odds. I see it in that Camp Dental Group parking lot and watch their school and think about the odds of evil, the odds of random violence. The odds of it finding the same town—the same family—twice. I think the odds are with us. I think of them like sitting ducks at school or when we go to the mall or a McDonald’s, but been steady my breath and quietly thank the odds. I do this almost every day—which, sick as it sounds, feels sometimes like thanking the odds of Brookhaven. And that’s not how I mean it at all. It’s simply what allows me to look them in the face and take the risk of loving them.

The Last Thing I Told You is a great tale of psychological suspense that explores the interstitial spaces between sanity and insanity, thoughts and violence, and facts and memories. It’s also a novel by a very talented author flexing her muscles unapologetically while at the top of her game.