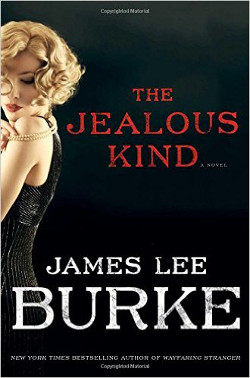 The Jealous Kind by James Lee Burke is a Holland Family novel and an atmospheric, coming-of-age story set in 1952 Texas, as the Korea War rages (Available August 30, 2016).

My experience with the jellyfish seemed to characterize my life. No matter how sun-spangled the day might seem, I always felt a sense of danger. It wasn’t imaginary, either. The guttural roar of Hollywood mufflers on a souped-up Ford coupe, a careless glance at the guys in ducktail haircuts and suede stomps and pegged pants called drapes, and in seconds you could be pounded into pulp. Ever watch a television portrayal of the fifties? What a laugh.

Hold on, James Lee Burke is taking on the Fifties. He is best known for his Dave Robicheaux series set in modern Louisiana, but some of his greatest works have been his recent standalone novels about the Holland family. Hackberry Holland has his own series, but these involve Weldon Holland and Aaron Broussard, distant relatives of the Texas lawman who brought in John Wesley Hardin.

If you enjoyed The Wayfaring Stranger, Burke’s latest novel, The Jealous Kind, is also set in the 1950s, when America had taken the reins as one of the world’s two superpowers while Europe recovered from humanity’s attempts at industrialized destruction.

Aaron Broussard is a sophomore in high school, a scared boy who loses his fear one night as he swims out past the sandbars of the Gulf and finds himself surrounded by poisonous jellyfish. The bravado he gains from making it past them alive spurs him to acts thought as suicidal—he intervenes when the local rich-boy tough Grady Harrelson argues with his girlfriend and puts himself in the sights of a jealous and self-loathing young man of power and wealth.

Grady always struck a pose that seemed to capture our times—petulant, self-indulgent, glamorous in a casual way, and dangerous, with no self-knowledge.

Valerie Epstein, the object of Aaron’s infatuation, is one of Burke’s better creations—a confident, intelligent, and (of course) beautiful young woman whose been branded a communist. The Epsteins are no stereotypes; anything but. Mr Epstein served in the OSS and told his daughter that he would defend her with his life and treat her as an adult. The grease gun in his closet is there to prove it. He threatens to kill Clint Harrelson, the local power broker who is building “summer camps” to indoctrinate youth against the Red menace, and no one thinks he is bluffing.

Burke has never glorified war, and lately he has been diving into the World Wars as well as the War Between the States, and he makes his position on his home state’s “heritage” clear:

“There’s no glory in any of this. Nothing good comes out of war. It only breeds more hatred and suffering and killing. Freeborn Negroes, man, woman, and child, where taken from their homes in Chambersburg and sent to the auction block in Richmond. Louisiana outfits participated in it, too. Robert Lee witnessed the terrorizing of the town and did nothing to stop it. The kidnapping and selling of Negroes was no different than the behavior of Nazis. That’s where ideology leads us, Aaron.”

The plot is as twisty as they come, as Broussard and his family—his strong but depressive mother and his alcoholic but genteel father who writes of the Civil War—become entangled with local Texas corruption. Local toughs from both sides of the tracks, “greaser boys” in drapes and stomps and duck’s ass haircuts, psychopathic mobsters and their tortured, violent children, pederasts who also served bravely in war; Burke is well known for his romanticism and self-destructive heroes who either cleave to the rules of the almighty middle class or flout them like outlaws to their own detriment, and this story is no different.

The Clete to Aaron’s Dave Robicheaux is Saber Bledsoe, who grew up poor but knows the score and loves flipping the bone to the powerful—from his slimy teacher Mr. Krauszer to Grady and his crew of toughs.

He used his power to humiliate and degrade and to inculcate shame and self-hatred in others. To me there was no lower form of life on earth, including drug pushers and pimps.

One of the most interesting characters is on the sidelines, a blue collar tough named Loren Nichols, who enters as a heavy and is given time and pathos. He’s spent time in county jail for shooting someone with a zip gun and protects his turf against interlopers like Sabe and Aaron like a junkyard dog on a broken chain. He becomes an unlikely ally, and I would enjoy a book about him on his own.

The music of the age, the R&B that gave birth to rock ‘n roll, honky tonk country, and dirty jazz all get their chance to shine here; Loren is an up-and-coming musician, and Aaron is a bull rider at the rodeo. There is truly never a dull moment here, except perhaps in Aaron’s unlikely flirtations with a Vegas mob moll named Cisco Napolitano, a junkie whom he lectures as if Robicheaux invaded his body. For a somewhat sheltered teen, Aaron knows all about yellow jackets and black beauties and how they will ruin your brain, before he’s had the chance to drink many white port and lemon juices himself. It’s a bit of a glaring weakness in the third act, but quickly forgotten as the mobsters, toughs, and Valerie and Aaron’s friends converge for a final confrontation.

As a great fan of Burke’s, his prose is as strong as ever and his trim storylines for the standalones make them a great entry point for anyone daunted by the enormous Robicheaux series (even if you can dive right into Creole Belle without earlier knowledge and enjoy the hell out of it). The Jealous Kind also works if you just want a slice of hard-edged ‘50s noir that sees through the nostalgia to the dark heart of the American dream.