Review: The Hypnotist by Lars Kepler 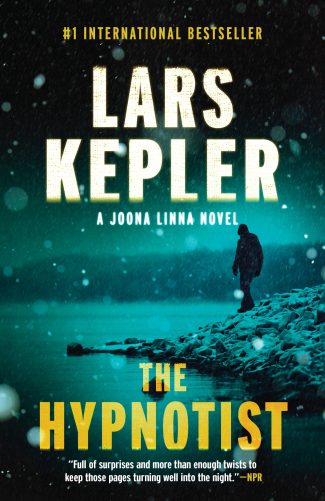 The Hypnotist by Lars Kepler is the first installment in the #1 internationally bestselling Joona Linna series, which shows the lengths one determined detective is willing to go to solve a horrific crime.

Hypnotist and shock/trauma specialist Dr. Erik Maria Bark is called to the bedside of a young man late one night. The boy, Josef Ek, has been stabbed repeatedly. His entire family has been murdered. For a second, Erik thinks Detective Joona Linna has called him in because of his trauma expertise. But Linna quickly asks him to hypnotize Josef—the only witness to this incredibly violent crime.

Despite his misgivings, Erik agrees to the risky procedure in order to save the last remaining member of the Ek family—Evelyn, Josef’s older sister, who has gone missing. Under hypnosis, Josef reveals a horrible truth that will have dire consequences for everyone: Josef, Evelyn, Erik, and Detective Joona Linna.

The Hypnotist by Lars Kepler is the first installment in the Joona Linna series, translated by Neil Smith. Reminiscent of works by Stieg Larsson and Jo Nesbo, this crime story is dark and violent and delves into secrets that characters don’t want to tell. But digging into secrets is what Joona Linna does best, seeing as he has a few of his own.

When Joona inserts himself into the crime, the working theory is that the family was murdered by a particularly violent enforcer due to the father’s gambling debts. However, after examining the crime scenes—yes, there are two murder scenes—Joona determines the father was actually killed first. Which begs the question: why murder an entire family if you’ve already killed the man you’re trying to force to pay?

Then, there’s the heinous nature of the crime. A little girl was practically cut in half. A woman’s abdomen was carved. An enforcer doesn’t need to torture, just kill. But this killer spent time and effort on this family, trying to remove them from the world entirely in the most painful, gory way possible. Except, he left someone alive.

Josef Ek suffered multiple stab wounds, and Kepler does nothing to spare the reader the gruesome details of all the injuries. Josef is incapable of undergoing a regular interview. His doctors don’t want him to overexert himself. The wound to his liver is apt to start bleeding again if he moves too much.

But Joona needs a witness statement if he’s going to catch this killer. He needs a description, a clue, anything. Josef’s sister, Evelyn, is still out in the world somewhere, and if the killer wants to destroy all of the Eks, Josef is the only one who can help save his sister and himself. So Joona calls in Dr. Erik Maria Bark, a once-noted hypnotist, to help.

Erik, however, is reluctant. Years ago, something went wrong with a hypnotism, and he swore that he would never do it again. Josef’s doctors are also doubtful of the idea. But looming over all of them is the threat of Evelyn Ek—because if she’s not a victim, she’s a potential suspect.

In the end, Erik agrees, and Josef reveals things no one expected:

“There’s a knock on the door,” the boy slurs. “I open it, but there’s no one there, I can’t see anyone. But the knocking continues. I realize someone’s playing a trick on me.”

The patient is breathing faster, his stomach moving irregularly.

“I go to the kitchen and make a sandwich.”

“You eat a sandwich?”

“But now the knocking has started again. It’s coming from Lisa’s room. Her door is slightly open, and I can see that her princess lamp is switched on. I gently push the door open with the knife and look in. Lisa’s lying in bed. She’s got her glasses on, but her eyes are closed and she’s gasping for breath. Her face is white. Her arms and legs are really stiff. Then she leans her head back, and her neck tenses. She starts kicking the end of the bed with her feet. She kicks faster and faster. I tell her to stop, but she keeps kicking harder. I shout at her, and the knife has already started stabbing. Mom runs in and grabs me, and I turn around, and the knife goes in. It just pours out of me. I get more knives. I’m scared of stopping. I have to keep going, I can’t stop. Mom crawls through the kitchen; the floor is all red. I have to try the knives on everything, on myself, on the furniture, the walls, I hit and stab, and then I feel really tired and lie down. I don’t know what’s happening; I hurt all over and I’m thirsty, but I can’t move.”

The theory is that no one can lie under hypnosis—and the boy just confessed to murder. But it’s an inadmissible confession. Plus, the forensics doesn’t quite match the boy’s story. The details are fuzzy and don’t make much sense. Is it because Josef is in pain? Is there something he’s holding back or misunderstanding? What possible motive is there?

Or is the problem with the hypnotist? Erik has been struggling with his marriage, his son, and his life. He’s regularly taking sleeping pills to help him sleep—enough so that he falls asleep in the middle of conversations without realizing it.

Did Erik ask Josef any leading questions? Even by accident? Was he fully present when putting his patient “under”?

Then, news of the hypnotism gets out. Now, Erik has to navigate a flood of people questioning the legality and overall usefulness of his techniques. His past is dredged up along with all the dangers that come with it—all while an incredibly violent killer is on the loose and the National Crime force might not have the ability to stop him.

Lars Kepler’s The Hypnotist is playing on several layers. No character is left unexamined. Every option is explored. And by the time you hit the climactic scenes, no one is the same.