Review: The Gray Ghost by Clive Cussler and Robin Burcell 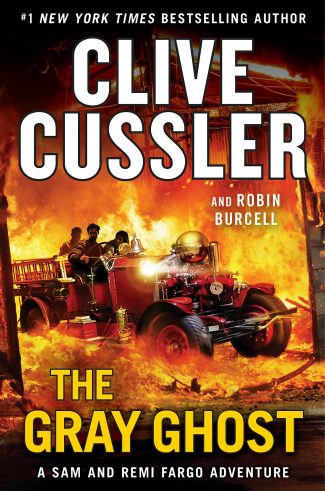 The Gray Ghost by Clive Cussler and Robin Burcell is the 10th book in the bestselling Sam and Remi Fargo Adventure series, where the search for a legendary automobile threatens the careers and lives of the husband-and-wife team.

There was a time when Clive Cussler held considerable sway in my reading. Look no farther than Cyclops (1986), brimming with taut suspense, engaging characters, and plot detours that left my mouth agape and muttering “rad!” (it was another time, kids). For a span of my teenage years, Dirk Pitt had gained equal ground to Robert B. Parker’s Spenser as the hero I imagined becoming once I had made enough dough scouring the seafloor for sunken treasure.

That bias acknowledged, The Gray Ghost has several minor points working against it from this seasoned reader’s starting line: recurring series characters have grown stale of late; creating a special section for a cast of characters with almost 50 names to juggle is mindboggling; and novels that insert the author into the proceedings is jarring at best—here we have protagonists Sam and Remi Fargo at a Pebble Beach auto show contemplating their fortune “that Clive always had guest passes waiting for them.” Oy vey!

Still, for the youthful version of myself, I delved into Cussler’s latest, ignoring my “mature” protests. And for the most part, I enjoyed myself. Ghost begins in 1906 with the theft of a prototype from the famed Rolls Royce duo. It’s recovered by another Cussler series character named Isaac Bell, but then it seemingly vanishes again, with the rumor that gold sovereigns were stashed in the vehicle bringing the overall value in the range of 150 million smackeroos.

Following in the winsome footsteps of the true originals—Nick and Nora—Sam and Remi Fargo are wealthy, charming, witty erudites who love adventure. When called upon, Remi can crank up the sex factor to stop mere mortal men dead in their tracks, and Sam under pressure can get out of a tight jam with the best of them:

This time the popping sound became a low growl as Remi pumped the gas pedal to raise the rpm’s. The old engine coughed a few times and began to growl, then turned over smoothly without losing a beat.

“I’ll take it from here!” Sam yelled to Remi above the crackling flames now in tune with the crumbling walls of the warehouse. “Take the passenger seat and hunch down.”

The huge tires hissed as they rolled over the spreading pools of burning oil. No time to be clever, Sam aimed the big silver-plated globe in front on a straight course toward the huge iron barrier, put the truck into first gear, and mashed the gas pedal to the floor.

The Ahrens-Fox approached the iron barrier at a speed Sam didn’t think possible. He gripped the steering wheel with one hand and threw an arm around Remi when the pumper was less than five feet from the massive doors.

At almost the same instant of the collision, the entire roof and the two remaining walls collapsed in a black glow of whirling smoke. The pumper plunged into the great door with a horrendous crash that sounded like the burst of an explosive.

The massive door refused to fall after the old vehicle came to an abrupt stop. Sam was surprised to see so much damage to the fire engine. Amazingly, it was still running, but the valves and pumps on the front end were a mangled mess.

“Hit it again!” Remi shouted like a cheerleader at a college football game.

Same made no reply except to grind the transmission gear into reverse, backing up fifty feet, before shifting into first gear.

This lighter-than-air read is entertaining and easy to digest, with the unfortunate side effect of becoming forgettable as you move on to your next book, and the next, and so on. That is until you spot another Fargo book (how can there not be more, right?) and recall how it brought a smile—however temporary—to your face. Then, you’ll line the pockets of the Cussler estate with more of your hard-earned cash. But, in short, the kid in me liked it well enough.