Book Review: The Grave’s a Fine and Private Place by Alan Bradley 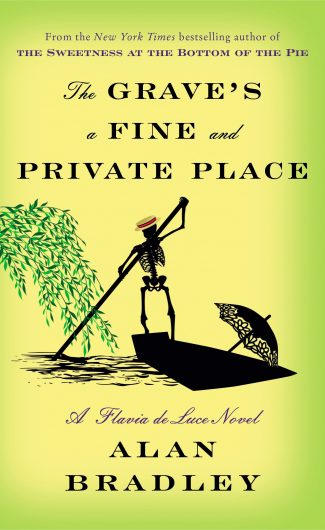 The Grave’s a Fine and Private Place

The Grave’s A Fine And Private Place is the ninth book in Alan Bradley’s Flavia de Luce series.

This is how much I enjoy Flavia de Luce: I’m not sure that I like her better now than I would have had I been a pre-teen who’d discovered her in my mystery-reading journey from Nancy Drew to Miss Marple. Flavia bridges that reading gap so perfectly that I’m almost sorry for my much younger self that Alan Bradley only started publishing these delightful novels nine years ago. At the rate of one a year since then, Mr. Bradley has covered a tumultuous—if much shorter—period in young Flavia’s life.

When this ninth novel in the series begins, Flavia is in a fairly dark place, contemplating suicide with the singular focus of a highly educated chemist in the body of a sensible, if bloody-minded, young lady:

[I] would simply do away with myself.

And as an authority on passing, I knew precisely how to accomplish it.

No cyanide for me, thank you!

I knew the symptoms all too well: the vertigo, the dizziness, the burning in the throat and stomach and, as the vagus nerve becomes paralyzed, the difficulty in breathing, the cold sweat, the feeble pulse, the muscular paralysis, the crushing heaviness of the heart, the slobbering…

I think it was the slobbering, more than anything, that put me off the cyanide. What self-respecting young woman would want to be found dead in her bedroom drowned in her own drool?

Flavia’s wryly self-observed melancholy is abruptly interrupted by her acquisition of a corpse while punting in the English countryside on a retreat recommended by Dogger, her family’s loyal servant. Having fished the waterlogged body out of the river, Flavia is determined to discover what could have brought the flamboyantly dressed young man to his untimely demise. Her curiosity is further inflamed by the revelation of his connection to the infamous poisoning case of three women parishioners by their own vicar two years earlier in that very town.

It’s fascinating to see what interests Flavia and what she discards as “adult,” and therefore uninteresting (or even more entertainingly, consigned to the spheres of either of her elder sisters, bookish Daphne and musical Ophelia), as she investigates the young man’s death. Lest anyone accuse her of childishness, however, her mental reenactments and chemical experiments are just as sophisticated as any adult’s, if not more so. It is utterly charming to see her combine her girlishness with her ferocious intellect, as when she’s stalling the village chemist in his underground photo lab by dint of standing on the trapdoor and pretending it’s stuck with him beneath while she rifles through his ledger for the names of those who’d recently purchased poisons :

I smeared a bit of dust from the floor onto my cheekbones, tousled my hair, then bent and threaded one of my pigtails through the ring. Then, in one single and continuous motion, in a fluid movement that would have delighted both Sexton Blake and Philip Odell, the BBC wireless detective, I stepped off the trap and pulled open the hatch, using my hair as a rope.

I stared down for a moment into the lobster-red face of the chemist.

I held the pose just long enough that the astonished Wanless could see what I had done. Then, freeing my hair from the ring with a flick of my head, I stuck out a helping hand and began to haul him up out of the hole.

“Oh, you poor soul,” I cooed, hoping it would sound genuine. “The beastly ring was jammed. I had a very dickens of a time getting it open. How brave of you not to have panicked! If it were me”—I shuddered—”I should have shed a kidney.”

I know… I know. But sometimes it’s necessary.

Flavia’s charm, intelligence, and self-aware sense of humor make for an irresistible combination, and series fans will be extremely pleased by what she decides at novel’s end. It’s also wonderful to see her gradually adjust to her own increasing maturity, particularly in her interactions with Hob, the undertaker’s boy. The Grave’s a Fine and Private Place perfectly showcases how Flavia and her family are beginning to heal from the tragedy of the novel preceding it and are moving forward to a place where each member—even the domineering Aunt Felicity—is appreciated for their talents and skills. I cannot wait for Book 10.