Book Review: The Family Next Door by John Glatt 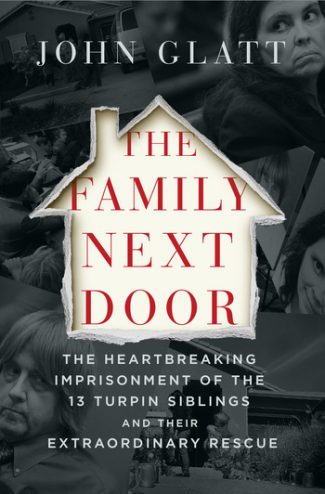 The Family Next Door: The Heartbreaking Imprisonment of the Thirteen Turpin Siblings and Their Extraordinary Rescue

From New York Times bestselling true crime author John Glatt comes the devastating story of the Turpins: a seemingly normal family whose dark secrets would shock and captivate the world.

Very few stories are as disturbing as the true story of the thirteen Turpin siblings. In 2018, Jordan Turpin – one of the middle children at 17 years old – snuck out of the house where she and her siblings were held captive by their abusive parents, Louise and David Turpin. Jordan managed to get ahold of authorities, saving her own life and those of her brothers and sisters. It was the beginning of the end for David and Louise.

The Turpins’ story has been told through several media outlets, including The Dr. Phil Show and The Dr. Oz Show. Detail after horrific detail has been reviewed and analyzed. All the questions interviewers and the media have asked center around: How could this happen?

Check out our Q & A with John Glatt!

In The Family Next Door: The Heartbreaking Imprisonment of the 13 Turpin Siblings and Their Extraordinary Rescue, investigative journalist John Glatt explores the family background and circumstances that led to a family cult allowed to run rampant for three decades.

Glatt, who has written over 20 books covering some of the most gruesome true crime stories, successfully explores the legacy of a family’s underlying trouble. He also clearly illustrates how difficult it was to nail down what exactly happened with the Turpins as, step-by-step, the parents evaded official notice and presented a false front to the world.

The early sections of this true crime account reveal the dangerous mix of “ingredients” that eventually led to the torture of thirteen children. Louise, the Turpin mother, was raised in a sexually abusive world. She was molested from a young age by her grandfather and seized the first opportunity to escape – by getting married to twenty-three-year-old David Turpin when she was sixteen.

David, like Louise, was raised in a strict Church of God environment. Yet David admitted an attraction for Louise when she was only ten years old.

Glatt does not present these background facts as an excuse but as an explanation. It’s clear that any person raised with appropriate socialization or healthy affection would not resort to the degradations that Louise and David sunk to. The parents’ history has a direct effect on the children they brought into the world.

Beginning when Louise was a tiny child, Phyllis [Louise’s mother] would regularly drive her over to her father house. For years, John Taylor, now in his midforties, had allegedly been molesting his daughter. Now he turned his attention to his pretty young grand-daughter, and Phyllis allowed it – in return for money.

“He was the family leader,” said Elizabeth [Louise’s sister], “He had money, so when my mom needed money, she ran to [him].”

It was always the same. At some point during the visit, Papaw would whisper to Louise that they were going into the other room for a “tight hug.”

Years later, female family members would reveal what had really happened in their grandfather’s house.

“He molested my mom all her life,” said Louise’s youngest sister, Teresa. “We begged my mom not to take us there some days, and she would take us anyway. He was very, very wealthy.”

Their grandfather’s alleged abuse was a closely guarded family secret, and the girls were told never to talk about it.

“That’s how we were programmed,” Elizabeth explained. “We know how to mask very well [and] not show what we’re feeling.”

What’s most striking about these descriptions is that neighbors and officials knew something was strange – even disturbingly awful – yet they found out only after the Turpins abandoned houses or filed bankruptcy. The Turpins moved across county and state lines. So, even after some truly horrific scenes were discovered, they couldn’t be found.

One such horrific scene involved neighbors along Hill County Road in Texas who headed into the Turpin’s abandoned property to investigate. (Warning – this is a very disturbing scene involving animal cruelty):

The back porch door of the redbrick ranch house was wide open, so they walked in. The pungent smell was overwhelming.

“It’s knee deep in filth,” Ricky recalled. “Dirty diapers piled waist high. There’s computers, toys, and trash. The toys are still in the boxes. They’ve never been opened. They had Mattel toys for the baby and Pirates of the Caribbean stuff, as well as a TV in the mulch. You could see the rats jumping in and out of the stuff.”

In the kitchen, they found a dead cat on the stove and a dead dog on the floor, as well as several other animal corpses lying around.

The good news is that David and Louise Turpin were caught, stood trial, and were found guilty. The bad news is that the children may find recovering from the psychological and physical damage inflicted impossible. They will carry these scars forever.

The Family Next Door: The Heartbreaking Imprisonment of the 13 Turpin Siblings and Their Extraordinary Rescue is an unflinching investigation into the circumstances these children were born into and the steps that led to their eventual rescue. John Glatt’s prose is clear and concise, free of sensationalism, letting the disturbing facts speak for themselves.