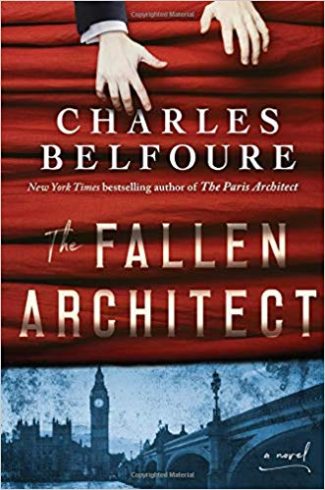 In The Fallen Architect by Charles Belfoure, architect Douglas Layton finds himself digging up the past to clear his name.

It’s hard to say that architects are overrepresented among mystery/thriller protagonists. Dick Francis wrote at least one novel (Decider) with an architect detective; the unseen antagonist of JP Delaney’s domestic thriller The Girl Before is a sociopathic architect; Jon Manchip White featured an architect hero in the thriller The Game of Troy; and Christian Belz and Jason Overstreet both wrote two-book series with architects in the lead (the Ken Knoll Architectural Mysteries and the Renaissance Series thrillers, respectively). Full disclosure: my DeWitt Agency Files crime series also employs an ex-con ex-architect. But that’s about it.

This makes Charles Belfoure stand out in the mystery field. The Fallen Architect is his third mystery novel to feature an architect who’s in the kind of trouble that makes for bad business and good reading.

The setup: Douglas Layton is a London architect at the top of his game in the twilight of Queen Victoria’s reign when a catastrophic structural failure at his Britannia Empire Theatre kills fourteen people. Convicted of negligent manslaughter, he spends five years at Her (then His) Majesty’s pleasure, then is spit out into a nation that regards him as “The Butcher of the West End” and thinks it a shame that he didn’t hang. A social pariah with his wife and child beyond his reach, Layton takes a new name and begins painting backdrops for a music hall (Britain’s version of vaudeville). He discovers quite by chance that the Britannia Empire disaster was anything but an accident. Layton spends the rest of the tale trying to discover who set him up.

Layton’s no toff – he’s a commoner who managed through hard work and a fortuitous marriage to turn himself into a gentleman, a neat trick in the calcified Victorian social pyramid. Equipped with some street smarts and a refreshing lack of snobbery, he adapts quickly and gets on well once he has been knocked back to “his station,” though he lives in fear of being found out by his new friends or recognized by his old ones. He not only needs to step carefully to protect his cover identity but also has to resist his over-fondness for drink in a social circle that revolves around booze. As such, he’s a recognizably human, relatable character who’s a pleasant-enough guide through the dawn of the Edwardian Era and the rapid social and technological changes that came with it.

Belfoure plunges Layton as well as the reader into the world of variety theatre (the Edwardian term-of-art for music hall); the descriptions and explanations are for Layton as much as they are for us, a neat way to make exposition a part of the narrative rather than an interruption. Variety theatre’s business and production practices become integral parts of the story. This also makes for some colorful supporting characters – it’s unlikely you’ll find another recent novel in which a displaced African pygmy plays a significant role.

Once it gets going, the mystery part of the program unfolds steadily, if a bit leisurely. There are enough red herrings and plot twists to obscure the final resolution, none of them too contrived. Unlike some amateur-sleuth stories in which the protagonist’s career skills have nothing to do with detecting, Layton gets to use his architect chops to determine how the sabotage was carried out and zero in on the players who had the capacity to pull it off. For once, the amateur sleuth is actually qualified to break the case.

The author’s writing style is clean and unfussy, leading to quick-reading prose. Had I remembered to take this book with me on a recent transatlantic flight, I could have finished it in one hop. His descriptions are generally graceful and detailed enough to evoke a costume or setting without becoming encyclopedic, though a passing acquaintance with BBC-like dramas set in Edwardian England could be helpful. The furniture of everyday living – posters, streetcar ads, the price of food and drink – gives the world a lived-in feel. Layton, our point-of-view character through most of the story, notices buildings with an architect’s eye but doesn’t lapse into specialist jargon when he does. (Congratulations to Belfoure, a practicing architect, for not writing like one.)

There are a few nits to be picked. While Layton is a man of his time, Cissie Mapes, a theatre syndicate manager and Layton’s love interest, seems at least four decades ahead of hers. She’s an engaging character and a fine match for Our Hero, but I had to work to fit her into 1905. The mystery plot doesn’t get going until Chapter 11; until then we have to take it on faith that there is, indeed, something wicked coming our way. The resolution relies on a familiar mystery trope that you may spot prematurely if you read enough in the genre, leading to what in another context would be called a “Hollywood ending.”

The Fallen Architect is an atmospheric novel featuring an intriguing mystery, a sympathetic lead, and an interesting supporting cast, all set effectively in a colorful milieu. If this sounds good to you, read it now before it makes the easy leap to Masterpiece Mystery or an Alienist-like prestige production on TNT or Netflix. If you like what you read, the author’s The Paris Architect and House of Thieves await with more tales of architects beset during dramatic times. In any event, you’ll get a good read and come away with an appreciation for good plasterwork.