Review: The Druid of Death by Richard T. Ryan 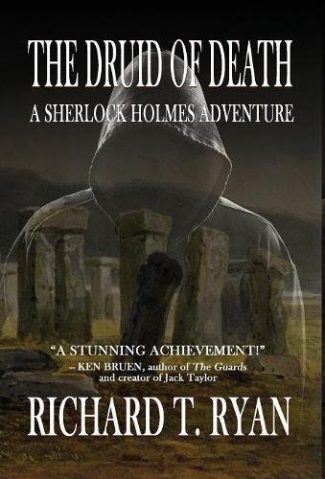 The Druid of Death

The Druid of Death by Richard T. Ryan is a Sherlock Holmes adventure about ancient Druids, Celtic mythology, and a creepy string of ritualistic murders.

An early morning summons involves Sherlock Holmes and the ever-faithful Watson in a new case. In this second Sherlock Holmes mystery by Richard T. Ryan, the body of a murdered girl is discovered at Stonehenge. The arrangement of the body, positioning of branches around her, and mysterious signs painted on her body all suggest a ritual murder.

We arrived about midday and made our way to the site, which was now ringed with officers. On one of the smaller stones that might be said to resemble an altar, lay the naked body of a young woman. When I arrived, she had been covered by a sheet. If I were to guess, I would say that she was of average height, perhaps 140 pounds, with well-developed leg muscles and a head of ash blonde hair. A glance revealed that she had died from a single stab wound to the heart, after which she had been eviscerated.

Her organs had been carefully arranged around the body, and her own Blood used to paint a number of symbols on various parts of her body. Above her head and at both her sides were branches that had been cut from a yew tree. They had obviously been positioned with care.

Holmes first turns his attention to the symbols that mark the body. His investigation leads him to identify the ancient writing of ogham.

“According to Dr. Smith, the ancient Celts, more specifically the druids, devised an alphabet of some 20 characters. The letters themselves are fairly simple, being composed of vertical, horizontal and diagonal lines in various combinations. Each letter is associated with a particular tree, and as a result each carries an array of connotations that add layers of meaning to its usage.”

And when Watson asks about the meaning of those symbols, Holmes responds, “Death.”

Wondering if this is a murder that has some connection with the Druids or whether it was just meant to look like a sacrifice, Holmes guesses that there will be another murder at a sacred site. Accordingly, he and Watson take up positions at Avebury and wait. But the murder does not occur at Avebury but instead at Uffington, the site of the famous chalk horse. And this time the victim is a young man, a butcher’s apprentice. There is no discoverable connection between the two victims. And since the first two deaths occurred on Druid holy days, Holmes predicts a third murder will take place on September 23.

Holmes is unable to prevent this third murder. Again, there is no discernible connection between the victims. And now, they are looking forward to October 31 and the possibility of a fourth murder.

But Holmes is able to cut through the confusion and solve the case through the study of trees.

“Of course, all along this has been an exercise in misdirection. The tree branches stand at the center of everything. Consider, they are the only things that had to be brought to the crime scenes. In a sense, they are the only foreign objects to be found; now, the more we know about the trees and their locations in the countryside, the closer we are to solving the case. There are no trees in Stonehenge, as you know. Nor are there trees at the Uffington White Horse or Drizzlecombe.”

Of course, the murderer is not at all who the reader suspects.

The Druid of Death is clever and fun, a winning combination. The setting—Victorian England—and the Druidic lore is absolutely captivating. This is my favorite kind of mystery. It is a Sherlock Holmes mystery and one in which I learned a lot about the Druids.