Review: The Disappearing by Lori Roy 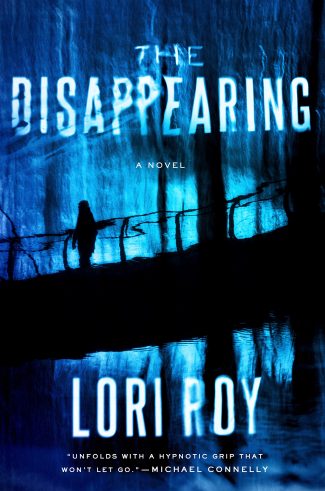 The Disappearing by two-time Edgar Award-winning author Lori Roy is a twisted, atmospheric tale about a small Southern town where girls disappear and boys run away.

Lori Roy may be new to contemporary fiction, but she’s already left an indelible mark on the crime genre. Her debut, Bent Road, won the Edgar Award for Best First Novel, and her third title, Let Me Die in His Footsteps, won the Edgar for Best Novel (her second book, Until She Comes Home, was a finalist in this category)—making her the first woman and third person to win both accolades. Roy’s newest, The Disappearing, continues her tradition of Southern Gothic suspense.

As the story opens, we meet single mother Lane Fielding, who fled her northern Florida home—and the scandal that has plagued her family for generations—after high school for the comforts of being anonymous in New York City. Lane also found solace in the arms of aspiring novelist Kyle Wallace. Twelve books and two daughters later, Lane discovered that Kyle has been unfaithful; adding insult to injury, he declined her offer to work things out in preference of divorce. Consequently, she’s returned to her hometown of Waddell where she tends bar at Rowland’s Tavern and lives with her children under her parents’ roof at Fielding Plantation. It’s an untenable situation that’s worsened by the suspicious disappearance of a Florida State student, Susannah Bauer.

Susannah’s disappearance coupled with the exhumation of old skeletal remains nearby ignites a media frenzy, bringing hungry journalists to the Fieldings’ doorstep in hopes of unearthing the sins of Lane’s father, Neil, who has long been suspected of egregious abuses against the boys who once attended the family-run school that abuts their plantation. Though elderly and increasingly infirm, Neil continues to incite a level of fear in Lane and his wife, Erma—not necessarily for what he may be capable of still doing but for what he may already have done. Lane has never fully escaped her past, or the series of events that unmoored her, but when her eldest, Annalee, also goes missing, it forces a long-overdue reckoning.

A desperate search for Annalee ensues, and Lane is thrust into a tenuous alliance with her onetime lover, Mark Ellenton, who is now Waddell’s sheriff and thereby privy to her reputed record of infidelities and transgressions. Meanwhile, similarities between Susannah’s and Annalee’s physical appearances and their disappearances spark communal fear of a serial killer (or spree abductor) on the loose, though the incidents could just as easily be isolated. As the body count grows, so do the apparent connections to Lane. It’s a combustible situation, and Mark’s investigation illuminates truths and mistruths that she may not be ready, or willing, to face—ones that are as much about herself as they are about her family. Will there be an opportunity for redemption? Or will her daughter(s) inherit a legacy that can never be outrun?

The narrative unfolds through alternating perspectives that include Lane, Talley (Lane’s youngest), and Erma. While this is a standard approach, it serves the story extremely well; not only does each person possess crucial knowledge that is often unknown to others (or even to themselves) but it allows Roy to both heighten and prolong suspenseful moments by honing in on them only to then back away until a future point of collision. Further, it enables the past to be revealed in carefully measured doses and for the requisite assumptions, biases, and implications to keep characters, and readers, off-kilter. Clues are cleverly strewn along the way, culminating in a conclusion that feels equal parts invigorating and inevitable.

The Disappearing is an entirely absorbing tale, told in a meandering-yet-methodical manner that slowly builds to a breathtaking climax. There’s an underlying sense of menace throughout that is often quiet but undeniably present and ever growing—and it’s effectively underscored by the claustrophobic setting. While the plot itself is masterfully multilayered, perhaps the truest and simplest moral of the story is that horrors often begin at home and live forever after in our hearts.