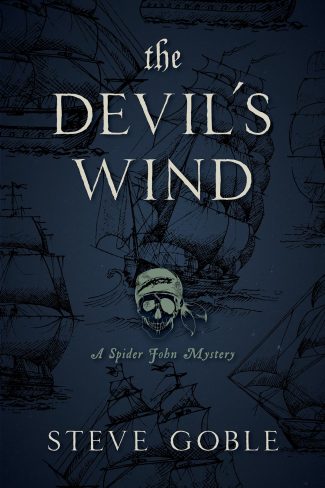 The Devil’s Wind by Steve Goble is the second book in the Spider John Mystery series, a historical mystery that blends nautical adventure in pirate waters with a locked-room murder mystery, featuring a pirate sleuth whose wits are as sharp as his blade.

The shot had come from within Captain Brentwood’s cabin.

…Wright was the first inside, and Abigail tore herself from Hadley’s grasp and rushed in behind him.

Spider thought the girl’s ensuing wail might haunt him the rest of his life.

“Come, Spider,” Hob said, his hand on the carpenter’s shoulder. “Let us have a look.”

Spider clamped a hand over Hob’s fingers. “Aye,” he said, though the boy’s eagerness bothered him. He pushed his way through the crowd around the door, Hob following in his wake.

The captain’s quarters were spacious, as far as nautical cabins go, but so many men had spilled into the space that one stood on a sea chest lashed against the bulkhead, and another would have knocked over the towering clock case in the corner had it not been secured with ropes. It took Spider a moment to worm his way through the men and see what had happened.

It was a scene of horror…

Spider John Rush, a carpenter forced into piracy, has finally broken from his old life. He’s secured passage on a merchant vessel bound for Boston for himself and his ex-pirate friends Odin and Hob. After more than eight years of unwilling separation, he’ll finally be reunited with his beloved wife, Em, and son, Little Johnnie.

But Fate remains cruel to Spider John: after only a few days at sea, the good and fair Captain Brentwood is found dead in his cabin, the apparent victim of suicide.

It’s the obvious and logical conclusion. Every hatch to the cabin is locked. The gun is found in the man’s hand. And he even scrawled “I’m sorry” on a piece of parchment before pulling the trigger.

But the Captain’s lovely daughter, Abigail, is certain her father would never commit such a mortal sin. And Spider has his own suspicions.

The murder isn’t the only black mark on the voyage, either. Sam Smoke, a sociopathic pirate and known companion to Ned Low—a truly barbaric scourge of the seas—is onboard disguised as a paying passenger. There’s also a mysterious red-haired beauty traveling with the Redemption who’s much more than the genteel widow she seems.

When the lovesick interim captain sets sail for dangerous waters, hoping to win the heart of fair Abigail, it will take all of Spider John’s wit and piratical experience to get them out of the swiftly-closing trap.

The second in the Spider John series, The Devil’s Wind packs a lot into a mere 250 pages. There’s the locked-room mystery, of course, plus several chilling tales of barbarous cruelty, action-packed fighting, historical asides, and plenty of quieter moments for Spider to wax philosophic about his lot in life.

Our hero is a satisfyingly three-dimensional guy. He’s a successful pirate, yes—successful meaning he’s still alive after years of lawlessness—but he’s always been an unwilling buccaneer. He doesn’t want adventure or buried treasure; he longs for a quiet life with his family, far away from blood and beaches.

Even though he and his shipmates had managed to hide out at the tavern, Spider was nervous. The unsettling nature of being ashore, where danger might step out of the crowd or any looming door or alleyway at any moment, always rattled him. But it was worse than usual now. The dangling nooses seemed to beckon him. He deserved to swing on the gallows as much as any of the poor souls who would be hung today.

He’d never wanted to be a pirate, of course, and he prayed to God he would never have to be one again, but he’d been caught up in that world and he’d done the bloody work necessary to survive in it.

A ship’s carpenter by training, he’d been forced to join a pirate band at a young age. The choice then—as it remained throughout the years of his pirate career—was to rob, fight, and kill, or be tossed overboard.

Only good fortune had placed him here among the watchers instead of on the gallows.

I will not squander this chance, he thought. I will work my way home, to Em and Little Johnnie. I will live a better life, by God.

As a sleuth, Spider stands out from the crowd. He’s an illiterate pirate who’s good with his hands and uncovers the truth through canny observations—proof that someone doesn’t need a well-rounded education or encyclopedic knowledge of esoteric subjects to be intelligent.

And for all of his bravery and determination, he’s still terrified of birds: “I think the Devil created them to shred men. And have you looked in their eyes? No more soul than a shark.”

Steve Goble spares none of the cruelty or grime of his setting and characters. This is not a polished fantasy world of glorified derring-do and handsome privateers. The stakes are always sky-high for Spider, Odin, and Hob, and anyone could die without warning. By the last page, plenty of blood has been spilled on the deck and sand.

If you’re looking for a story that spans genres, a mystery that has plenty of meat beyond the whodunit, or an adventure with authentic historical flair, The Devil’s Wind fits the bill nicely. It’s a compelling and compact read that wastes no space on unnecessary fluff, and it’s one of the better locked-room thrillers on offer. Something tells me it’ll be a while yet before Spider John gets home to Boston—lucky us.