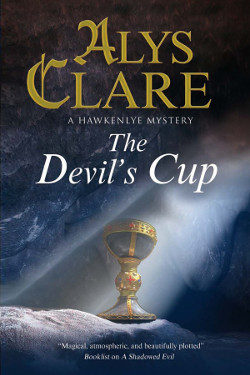 The Devil’s Cup by Alys Clare is the 17th and final book in the Hawkenlye Mystery series, where Sir Josse d’Aquin is summoned to assist the beleaguered King John (available August 1, 2017).

King John is on the throne of England in 1216. The youngest son of Henry II and Eleanor of Aquitaine assumed the throne when Richard I—also known as Lionheart—went on Crusade. After Richard dies on the way home, John retains the crown. Now King Louis of France is invading, and many of John’s lords are rallying around Louis.

The king sends an urgent summons to his loyal friend Josse of Acquin along with a few other loyal men. Josse, his brother Yves, and Josse’s son, Geoffroi, set out to help. Josse cannot stop thinking about a scrawled note in the king’s own hand at the bottom of the formal missive:

I am surrounded by indecisive men and turncoats, it said. It is time for old friends to come to my aid. I want you beside me, Josse d’Acquin. For the sake of the love you bore my father, my brother and, I may hope to say, me, come to me.

The signature, large and bold, sprawled right across the corner of the document. And there was something else: beneath the black letters something else had been written, but then, apparently changing his mind, the writer had impatiently and violently crossed it out, the ink so thick and the lines inscribed so forcefully that the vellum had been scarred. But, holding the document up to the light, Josse thought he could make out the words: I am so tired.

There is a wide range of characters, from royalty to landed gentry to nuns to a mother and son from the far away. All seem to have an important task to complete before the end of the book. How many are working toward a similar end, and who is working at cross purposes?

“I must go!” the woman said in a harsh voice. “I-we-have an urgent mission. There is danger, bad evil danger, and nobody understands the peril but us; nobody can stop the evil but us!” She paused, then—as if it was a secret and should not be spoken of aloud—hissed, “Through their greed and their folly my kinsmen began it, although they cannot have known what they were unleashing on the world, and now it is for us to finish it.” The dark eyes flashed with rage and frustration. “It is our responsibility!”

Meggie studied her patient. Was this the ranting of someone whose mind was unhinged? It seemed wise to explore a little further before deciding.

The women in this medieval mystery are all strong and independent—King John’s mother, Eleanor, being the exception—which isn’t something I have seen in a lot of books set in this time period. Here, it feels as if each of the main female characters has earned their place through hard work and determination. None of them were handed anything. Meggie is learned in the healing arts and is very much her own person.

The locations are also vividly drawn, giving a virtual tour of the south of England. We get a taste of the thick forests, the open meadows, and the shoreline marshes where safe paths can be swept away by the tide.

My nephew has a Bachelor's Degree in History. He would enjoy the view of the strain a royal visit can put on an estate and its supporting town. Hosting the in-laws for a week has nothing on feeding and sheltering a royal entourage, soldiers, and their horses. The best of everything must be put into use for the king. I think there might be something to say for being a plain farmer instead of a lord. But then again, I should probably ask my nephew.

And what if you are a woman traveling with a man who is a stranger on a mission he has not shared with you? Meggie knows the mission is dangerous and involves the royal family, but she doesn’t know if he is really trying to stop an evil event or if his mission has sinister intent. What could she do if he is trying to kill the king? Could she stop him?

There is a bit of magic here as well, which is treated as almost part of the land—something natural rather than supernatural. Visions, whether in dreams or while awake, are taken at face value for the most part. Something to warn or inform. It is a refreshing take.

Being my first introduction into the Hawkenlye Mystery series, I was a little lost at first. While the 17th and final book may not the best jumping-in point for a series, the world created in The Devil’s Cup was intriguing and made me want to know how these characters got to this point in the story. And where they go from here. Looks like I’ve got some reading to do!