Review: The Dead Will Tell by Linda Castillo 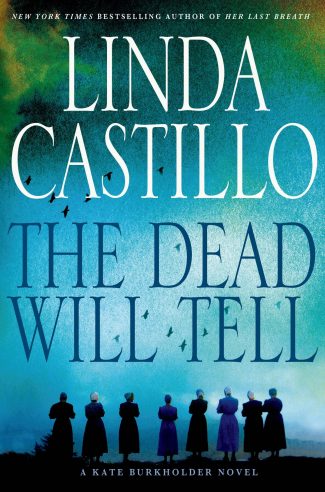 The Dead Will Tell

The Dead Will Tell by Linda Castillo is the sixth book in the Kate Burkholder series.

“Is it safe?” Not if you live in Painters Mill, Ohio—home to 5,300 people, half of them Amish. One of the more striking aspects of this captivating series is that there seems to be more crime per square mile than Miss Marple ever tripped across in St. Mary Mead.

Kate Burkholder, the chief of police, has a backstory covered in the first in the series, Sworn to Silence. It’s during the events of that novel that she is offered the job of chief. It’s not that the town council thinks she’s the best person for the job, but she has the one trait all other candidates lack: she was once Amish, so she knows their ways and can speak Pennsylvania Dutch. And the Amish refuse to talk to Englischers.

The Dead Will Tell, the sixth in the series, begins in 1979 when four masked teenagers enter an Amish home—the Hochstetler farm—intent on robbery. But something goes terribly awry, and the intruders kill the father, kidnap the mother, and lock the kids in the basement. The oldest child, 14-year-old Billy, escapes the basement and tries but fails to save his mother; to his horror, when he looks back, he sees the family house ablaze with his four siblings trapped inside.

Switch to current day; someone begins terrorizing the four perpetrators from 1979, beginning with Dale Michaels, a retired businessman. Threatening notes start arriving: “I know what you did,” and “I know what all of you did.” Michaels agrees to meet the letter writer at the Hochstetler farm—the site of the decades-old crime—and finds himself face to face with Wanetta Hochstetler, the woman he believed they’d killed 35 years earlier.

Her dress clung to a body that was still slender and strong and supple. The pouring rain and darkness obscured the details of her face. But she still had that rose-petal mouth and full lips. Long hair that had yet to go to gray. He knew it was impossible for her to be standing there, unchanged, after all these years. After what happened to her. After what they did to her.

“It can’t be you.” The voice that squeezed from his throat was the sound of an old man on his deathbed, gagging on his own sputum, begging for a miracle that wasn’t going to come.

“Her mouth pulled into a smile that turned his skin to ice. “You look surprised to see me.”

“You’re dead.” He scraped unsteady fingers over his face, blinked water from his eyes. But when he opened them, she was still there, as alive and familiar as the woman who’d been visiting his nightmares for thirty-five years. “How—?”

Kate and her small police force investigate but are met with one seemingly dead end after another. She finds that the alleged perpetrators from that long-ago crime—who claim to have not seen each other in years—have recently exchanged phone calls and texts. But all declare no knowledge of what might be happening in the present. Two more brutal murders follow in quick succession. Each death is preceded by notes like “I know what you did,” “Murderer,” and “you knew, you’re next.” Even with help of John Tomasetti, an Ohio Bureau of Investigation agent and Kate’s new roomie, the case runs into many blind alleys.

A revelation perhaps to no one, the grotesquerie that inhabits the world of Painter’s Mill suggests that evil personified is not as rare as one would like. Minutes before being murdered, one of the victims dreamed of the night so many years ago:

Even after all this time, and so many years trying to forget, it was as vivid as if it had happened yesterday. The absolute dark of an Amish farm. A drug-fueled plot that had gone horribly wrong. The spill of innocent blood.

Six people had died because of them. Amish mother and father. Four innocent children. A teenaged boy had been left alone, to fend for himself. But those weren’t the only tragedies that night. Four other lives had been irrevocably changed. Promising young lives wrecked by unfathomable guilt and secrets they would have to live with forever.

As in the previous novels in the series, some of the violence is shockingly graphic. Perhaps Castillo uses it as a metaphor for the great, seemingly unbreachable divide between the Amish and the Englischers.

The divide is maybe greater when the killer is unmasked. It doesn’t take much detecting for a reader to figure out the killer’s identity, but there is a mind-blowingly kinky twist at the end.

The Amish are pacifists, but think twice before you murder one. It isn’t safe.