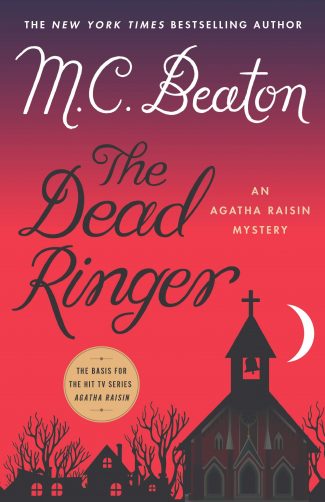 The Dead Ringer by M. C. Beaton is the 29th book in the bestselling Agatha Raisin series.

M. C. Beaton fans the world over will rejoice at these words: She’s back! Whether in regard to the author herself or her beleaguered protagonist Agatha Raisin, it’s always cause for celebration. Beaton—dubbed the “Queen of Crime” by The Globe and Mail—is the New York Times– and USA Today-bestselling author of the aforementioned series (which is also a hit show on Acorn TV and public television) as well as the Hamish Macbeth saga and four Edwardian novels. A native of Scotland, she now splits her time between the English Cotswolds and Paris.

Beaton’s newest, The Dead Ringer, is the 29th full-length entry in the venerable Agatha Raisin canon. As the story opens, readers find the residents of the remote English village of Thirk Magna in a frenzy of preparatory activity over the impending visit of Reverend Peter Salver-Hinkley, bishop of Mircester. These include identical twin sisters Mavis and Millicent Dupin, who lead the team of bell-ringers at St. Ethelred church. But when the handsome-and-he-knows-it reverend arrives (accompanied by Dean Donald Whitby), romantic rivalries escalate and shenanigans ensue—and the bodies start mounting. Fortunately, Agatha is on the case. Unfortunately, she’s also a suspect.

Though known for her sleuthing prowess (she oversees a detective agency), Agatha finds herself in a bit of a malaise. First, there’s the distraction of her own flirtation with Reverend Peter—though she quickly grows suspicious as to his motives and permanently outstretched hand. Then, there’s the unexpected promise of deeper, all-consuming love when a new-to-town reporter becomes her lede-ing man. That, too, becomes a dead end (literally), and Agatha decides to check out of her life and into a hotel, leaving the investigating to her trusted partners in crime. But soon, her pride kicks in, necessitating a return to the nuisance and nosiness that friends and foils alike have come to expect. Answers prove elusive, however, forcing Agatha to take extreme action. It’s a decision that puts her on a collision course with a killer who won’t hesitate to strike again.

The plot itself is absurdly amusing, and it’s underscored by humor and pathos in equal measure. Still, its greatest impact is as a catalyst for character development. While the sordid saga—with its multiple murders and myriad other misdeeds—lends itself to some pointed social commentary, it’s Agatha’s interactions with (and intimate ruminations over) her sometimes lover Charles and her ex-husband James that ground the story and allow the trio to remain somewhat sympathetic despite their self-destructive tendencies. These are the relationships that sustain a series when storylines become a bit muddled with peripheral players and discordant drama.

M. C. Beaton is known for entertainment of the eccentric kind, and her newest certainly delivers on that expectation. Agatha Raisin is as feisty and foul-mouthed as ever but with a touch of maturation and melancholy thrown in to balance her out. Overall, The Dead Ringer is a fun-if-fleeting way to pass the time, and it should strike a welcome chord among the author’s loyal audience.

Read an excerpt from The Dead Ringer!