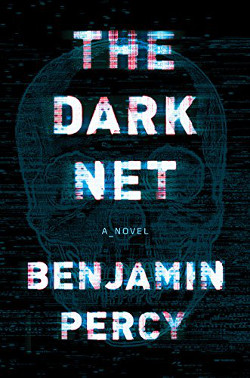 Set in present-day Portland, The Dark Net by Benjamin Percy is a cracked-mirror version of the digital nightmare we already live in, a timely and wildly imaginative techno-thriller about the evil that lurks in real and virtual spaces, and the power of a united few to fight back (available August 1, 2017).

Benjamin Percy’s The Dark Net melds modern-day technology—specifically the murkiest parts of the internet and the pervasive interconnectedness of humanity and digital content—with good old-fashioned horror writing to create a gruesome vision of demons tearing through both physical and digital Portland, Oregon. An ancient evil is gathering its might in the bowels of the internet, ready to unleash havoc on Zero Day. If all goes to plan, Portland will become the staging ground for spreading a digital infection to the rest of the world, ushering in a hell on earth that will doom humankind.

Humanity is not without its champions, though. There is Hannah, whose blindness might be cured by a cutting-edge technology that could also transform her into something more than human. There is Mike, a former child evangelist who is trying to atone for the greed and duplicity of his former life by sheltering the homeless and building up an arsenal of weaponry. There is Sarin, a woman who’s cheated death for so long no one can remember how old she really is. There is Lump, a deformed street preacher with a seemingly mystical command of crows.

And there is Lela, a journalist as wary of technology as she is of close personal relationships, a person for whom doubt is a way of life. When she first stumbles across all this while pursuing a follow-up story on the development of the apartment building serial killer Jeremy Tusk used as his lair before he was caught and executed, she has a hard time buying into the supernatural aspects of what she’s seeing. But a near fatal encounter with a murderous zealot persuades her otherwise:

Just like that, as if a switch has turned, her entire belief system changes. She’s always said—show me proof, where’s the evidence—and now here it is. Maybe the feeling won’t last. Maybe this night will fade like the bad dream it seems. But right now, she believes. The New Testament, the Qur’an, the Tipitaka, the Book of Mormon, the Sruti and the Talmud and the Tao Te Ching. All of it. Everything is true. Anything is possible.

It’s really cool how Mr. Percy draws parallels between faith and technology for this story. I also enjoyed how good and evil weren’t ever limited to a singular belief system. I’m not sure how convinced I was by some of the more technical details of the narrative—granted, I only really keep abreast of technological advances for the purposes of video gaming nowadays, despite having a (now very old) honors degree in Information Technology—but I did like how he wrote the human reactions to the technological horrors and marvels on display in The Dark Net.

Particularly moving were his ongoing descriptions of Hannah’s acclimatization to the Mirage, the bleeding-edge visual prosthetic (think of the visor used by Star Trek’s Geordie LaForge) that allows her to see again. Here in this passage, she is trying on the Mirage for the first time:

It is difficult for her to comprehend images, her frame of reference so far limited to her other senses. What she sees is like an echo. And inside the echo there is another voice. There is a blazing white above, and a muted white all around, through which things—people?—move. Her mother asks, “Can you see me? Hannah?”

She sees something, but is it her mother? It must be. But everything is mixed up. She can’t forge color with shapes or shapes with distance or distance with texture, every different input temporarily fizzling her brain, making her want to shout, “Does not compute, does not compute!” As if someone put a banana under her nose and a shark in front of her face and jazz in her ear and a broom in her hand and said, “What a beautiful sunset.”

The Dark Net is a horror-filled examination of the world around us, of what is real and what isn’t, of what’s worth believing in and what terrors lie in the unseen. Despite being a book strongly influenced by cyberpunk, it also reads like an homage to the demon-filled horror novels of the 1970s and ’80s. It’s a great read for anyone who enjoys that rich vein of thriller writing coupled with enough ideas to make for a thoroughly modern telling.