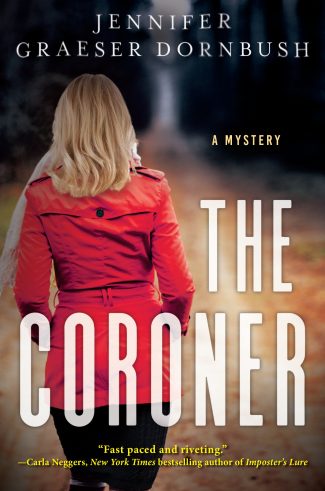 The Coroner by Jennifer Graeser Dornbush is a pitch-perfect mystery debut where Emily Hartford discovers home is where the bodies are when she is summoned from her promising surgical career first to her estranged father’s bedside and then his post as medical examiner when his small town needs urgent help with a suspicious death.

Author Jennifer Graeser Dornbush is no stranger to the medical examiner field—she’s the daughter of one herself. So it’s no surprise that her debut, The Coroner, features a protagonist whose father is in the profession.

Emily Hartford is a surgical resident in Chicago where she lives with her almost-perfect, soon-to-be fiancé, Brandon. She escaped a small-town life years ago after her mother’s unexplained and sudden death, leaving behind her father and her then-boyfriend, Nick Larson. After finding out that her father’s had a severe heart attack, she rushes back to her childhood home in Freeport, Michigan. She assumes this will be a quick trip to make sure her dad is alright, but it ends up turning into so much more.

Dredging up old feelings and running into her old flame, Nick—who is now a handsome sheriff who still has feelings for her—Emily finds herself stepping into her dad’s medical examiner shoes to help with a local, high-profile murder case. Soon, she’s embroiled in the case, her own confusing feelings, and her father’s poor prognosis.

Emily’s relationship with her father has been troubled since her mother’s death. They used to bond over Emily’s love of her father’s medical examiner work—she even asked to accompany him on an autopsy for her 13th birthday. However, her mother’s death hit the family hard, and her father didn’t process it well, leaving a young Emily sad and alone. When Emily returns to Freeport, all that pain and emotion come flooding back.

“Did he say that?” Emily asked.

“Listen, if it makes you feel better, just put on your doctor hat and tell him you’re here to ensure his medical welfare,” said Jo, flashing a smile.

“He’s going to tell me it wasn’t necessary to come all this way,” Emily replied.

“It’ll be okay, Em. You’re his daughter. He loves you.” Jo gave Emily’s arm a squeeze and headed back down the hall.

Loves me? Somewhere deep down, Emily sensed it was true. She had felt it in her childhood. And in those teenage years before her mom died, when she and her dad were teaming up on cases. But she hadn’t heard those words from him after that day in the emergency room. Emily’s last visual memory of her father was as a robust, but overworked, graying man hunched over his microscope in their home office, unable to verbalize his grief or connect with her anymore.

Emily is soon asked to step into her father’s position and attend the autopsy of a local horse-riding star teenager, Julie Dobson. What was suspected as a fall from the horse is actually determined to be murder. Julie’s head shows signs of blunt-force trauma, and her prize horse was found injured nearby. Murder in their small town is practically unheard of, and the town falls into a frenzy.

Emily feels a connection to the case due to the lack of answers involving her mother’s death so many years ago. When Julie’s sister, Sarah, forms a bond with her, Emily knows she must solve this murder and find the answers for Sarah that she couldn’t for herself. The longer she stays in Freeport, the more she finds herself enjoying the small-town life and settling back into a warmth and comfort she had almost forgotten.

Emily walked one side of the street and then crossed it to cover the opposite side. She passed a total of three people. When in Chicago could she ever walk around a single city block and encounter so few people? Never.

Halfway down the block, Emily found herself standing in front of an odd window display in Glassner’s Sports Shop. Inside, a happy deer family grazed on fake turf, completely oblivious to a mannequin hunter pointing a shotgun behind them. Emily found it ironic that this hunter was hoping to feed his family with theirs. It was an odd juxtaposition, much like the one she had stepped into last night. Trouble brewing beneath the surface of her hometown, and no one knew it was there. Yet.

Nick obviously still has feelings for Emily. When she left town, she departed without any explanation. When Nick sees her again, it all comes rushing back. Emily tries to stay committed to Brandon, but as her feelings for Nick begin to grow again, she worries she’s making a mistake and questions returning to Chicago at all. Nick and Emily’s love story is very warm and sweet, providing enough tension to keep readers interested in how it will turn out.

Emily and Nick team up to solve Julie’s murder and are committed to seeing it through to the end. Before long, she finds herself in the crosshairs, eventually coming face to face with the killer. Will Nick be able to get there in time to save Emily and solve the case?

I hope this is the first book in a series because the ending left much to be said. I was a little frustrated because I loved the story and wanted to read more! Dornbush’s forensic training and knowledge of the medical-examiner world shine throughout this fantastic debut. The Coroner will keep you reading, desperate to know how it all will turn out and just who did it.