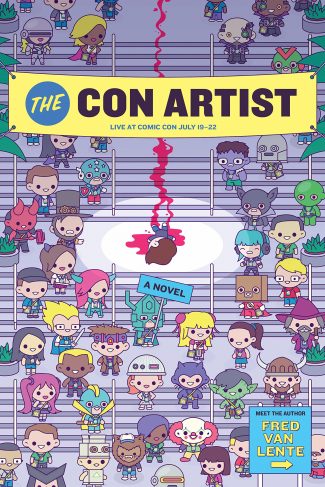 The Con Artist by Fred Van Lente is an illustrated mystery that will appeal to comic book fans and anyone who appreciates an unconventional whodunit.

For those on the outside looking in, the business of making comic books can seem like a dream job full of fun, wonder, and imagination. However, I’m reminded of a quote famously attributed to Jack “King” Kirby—the man who co-created Captain America and the majority of Marvel Comics’ most iconic heroes—which sums up the comic business at its worst: “Kid … comics will break your heart.” That’s because, as a pioneering creator, Kirby and his peers experienced incredible exploitation and mistreatment by the big companies that employed them and were never given a fair share of the profits that they’re iconic creations generated in publishing or other mediums. These days, some things are much better in terms of licensing deals, exclusive agreements, and creator-owned ventures, but shady practices still abound, and the injustices of the past still haven’t been fully rectified.

As a veteran comic writer, Fred Van Lente knows all this. He’s also well aware of what was done to past creators who worked on a series called The Comic Book History of Comics. In his second mystery novel, The Con Artist, he puts that knowledge to good use as he takes readers on a tour of the noirish underbelly of the world-famous San Diego Comic-Con. The end result is a surreal, funny, poignant, and incredibly fun crime novel.

The protagonist and first-person narrator of The Con Artist is a veteran comic book artist named Mike Mason. When we first meet him, he’s experienced some financial success but is burned out creatively and emotionally. So much so that he lives a very unique and nomadic existence, making his perspective on comic conventions fascinating:

“I gave up my house three years ago. Now I live entirely at cons. They fly me out, put me up in hotels, and I go to my Artists’ Alley table and draw sketches for people, and then another con flies me somewhere else. I just ask them to extend my stay past the weekend in either direction, instead of an appearance fee.”

Mason’s profession and perspective both as a comic industry veteran and an amateur detective are made more interesting by the fact that Van Lente has a collaborator on the book, acclaimed artist Tom Fowler. Fowler gives readers a glimpse at the clues, crime scenes, and cavalcade of characters Mason comes across over the course of the novel. 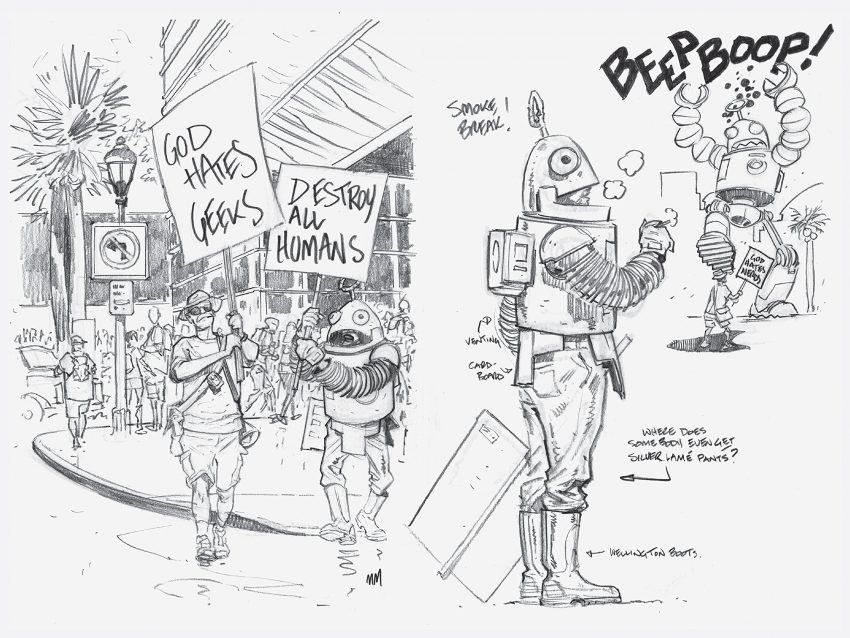 The book brings Mason face to face with a number of fun and memorable characters. The ones I found most fascinating include a pompous comic writer named Sebastian Mod, Mason’s friend and kindly fellow artist Katie Poole, and a fearsome private security expert named Brendan McCool.

The best way I can describe [Brendan McCool] is that he looked as if an Irish rabbi had animated a golem made entirely out of corned beef. His expression projected profound boredom with the world’s myriad horrors. He didn’t have a giant neon sign on his massive forehead flashing COP over and over, but maybe that was because it was so completely unnecessary.

McCool works for a mercurial and notoriously frugal millionaire named Ira Pearl. His and Pearl’s presence in The Con Artist are a reminder that comics are a big business. So when creators and amateur detectives try to solve a murder and maintain their independence, they’re up against very powerful enemies, providing an exciting, extra layer of noir to The Con Artist.

Pearl’s company, Atlas Comics, is a large part of the fictional yet grounded world Van Lente builds in The Con Artist. The other chief component is, of course, the pop-culture bacchanalia backdrop of Comic-Con. Van Lente is a veteran of several real-world Comic-Cons, so he expertly brings to life the surreal wonderland into which the city of San Diego transforms every year for several days in July:

The Bayfront Hilton’s hypermodern copper-colored lobby had been transformed into a superhero team’s space-station headquarters for Comic-Con. The front desk was even manned by Superman himself, with a gelled curlicue of hair at the top of his forehead and everything. His red-and-blue costume had big puffy muscles sewn in, which didn’t make him look like had a superhuman physique so much as a rare Kryptonian eating disorder.

San Diego quickly becomes a nightmare for Mason thanks to a chance drunken encounter with an editor turned archenemy. When that editor winds up dead, Mason is forced to use his artist’s eyes to search for details and find the real criminal. His investigation takes him to the convention floor, glitzy professional parties, and bizarre popup attractions. Along the way, he’ll confront his personal and professional demons.

Throughout the novel, Van Lente creates fictional but very real- and Hollywood-feeling television shows and movies and uses them as the backdrop for his action scenes. A particularly enjoyable example involves Mike Mason being chased through an obstacle course made to look like the set of a popular television show called Cell Block Z, which feels like an over-the-top blend of the gore of The Walking Dead and the gritty realism of prison shows.

Van Lente’s unique action scenes combine with a puzzling investigation and humorous personal anecdotes to create a breezy and fun read. While I’m not usually a fan of amateur detective stories, Van Lente’s knowledge of the comic business, his sense of humor, and his great worldbuilding skills all combine to make The Con Artist an incredibly enjoyable crime novel.