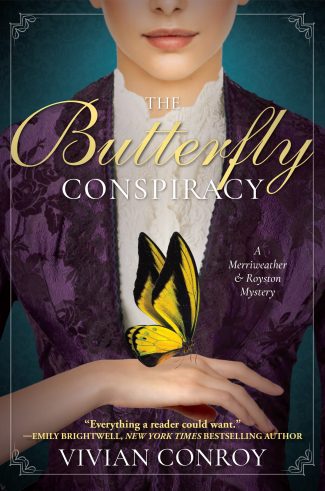 The Butterfly Conspiracy by Vivian Conroy is the first book in the Merriweather and Royston historical mystery series set in the late Victorian era.

This debut in the Merriweather and Royston Mystery series by author Vivian Conroy was simply a delight. In The Butterfly Conspiracy, we see main characters Merula Merriweather and Raven Royston as they work to solve a murder in Victorian London. This story ended up being one of my favorite reads of the year with its wonderful characters and fascinating mystery that kept me guessing until the very end.

Merula Merriweather is a Victorian lady, but she also breaks the mold with her unique interests in zoology and science. She has been able to study her interests because her uncle allows the work to be done in his name. In this way, her work is in secret, as it has to be in this time period.

“This is your work,” he said with certainty, “not your uncle’s.”

She flushed, remembering his earlier observation to that point at the lecture. Her attempts to pretend she’s had merely assisted her uncle with some practical things, such as choosing plants and designing the pupa cabinet, hadn’t been credible at all.

Royston continued before she could deny it, “Your uncle knows next to nothing about animals. Still he is praised for doing important research in which even the Royal Zoological Society is interested. He could be invited to meet the queen, while you do all the real work. Why on earth does he take credit for your accomplishments?”

“You can answer that question for yourself. Because nobody would allow me in. I am a woman. You heard them earlier. They do not even accept Uncle Rupert telling them anything, whether he has the support of the Royal Zoological Society or not. They would never listen to me, a mere girl with what they call fanciful ideas.”

When a butterfly—the Attacus atlas—from exotic lands hatches, she proudly takes it with her to a prestigious talk for the Royal Zoological Society. Spurred on by a mischievous Royston, Merula lifts the protective glass enclosure and allows the massive butterfly to fly around the room, demonstrating that it is indeed real. When the butterfly lands on Lady Sophia’s arm, she promptly collapses and is pronounced dead. Her uncle is declared responsible, as it is believed that the butterfly had poisoned Lady Sophia, causing her death.

“No one has harmed her,” Foxwell spoke, slowly and carefully, “but she might have been stung by a creature. Could that have caused her to die?”

Merula blinked as she tried to work out what he meant.

The doctor’s eyes went wide. “A creature? You mean, a snake or something?”

He glanced across the floor as if he expected a huge adder to come slithering up to him and climb up his leg. “You keep snakes in your home?”

“Of course not.” Havelock looked appalled. “All of my samples are dead. Which cannot be said of the creature you brought here tonight, DeVeere. You should have known better.” He turned to the door, which was still open following the doctor’s entrance, and snapped his fingers. “Dispose of that thing.”

Upon this signal, Havilock’s butler rushed in, carrying a poker in his hand, with which he struck at the butterfly as it hovered over a sofa.

It’s left wing smashed, it fell to the floor.

“No!” Merula cried. She felt as if she were caught in a dream where everything was happening very fast and she could do nothing to stop it. “Uncle, say something. It is not dangerous. The butterfly didn’t cause Lady Sophia’s death. No, don’t…”

But the butler’s shiny shoes had already trampled the fallen form. In moments the tender creature that had filled her heart with hope and happiness was reduced to dust on the carpet.

Merula, along with an unlikely ally in Royston, sets out to prove her uncle’s—and her own—innocence and find the actual murderer before she ends up dead herself.

There are other mysteries in this story as well, such as the identity of Merula’s birth parents. She doesn’t know who they are, only that they gave her to her aunt and uncle to raise—and they don’t answer any questions about them. Merula has a locket that she wears as her only tie to her past. Also, although Royston’s parents died years before, there’s a mystery surrounding the details of how his mother met her death. It is implied that she suffered from mental health problems and may have committed suicide, but as Merula and Royston look into it a bit more, they find that his father may have been responsible. These mysteries are teased but not solved, and I hope that they will be revisited further in the series.

Royston has a peculiar way of treating Merula, by her standards. He actually listens to her and respects her opinions. He believes a woman can do the things she wants to do, and he doesn’t see her as a delicate flower that can’t take care of herself. Merula reinforces Royston’s feelings by continuing to be a strong-willed woman who is definitely ahead of her time. There’s chemistry between the two, but it is very restrained, as per the time. We do see Merula’s feelings through her internal thoughts, but she does not act on them, which is to be expected.

Assisted by Royston’s group of friends and helpers, Galileo and Bowsprit, they are able to figure out exactly what happened to Lady Sophia and how it was done. It’s all quite marvelous, considering the time period.

Merula and Royston have proven to be a wonderful team. The ending sets up the following book in the series and lets the reader know that the duo, along with the rest of their group, will be having another adventure. I can’t wait to see what happens in the next book and to watch their relationship grow—not to mention the cryptid name drop that has me chomping at the bit. I’m looking forward to the second book in the series.