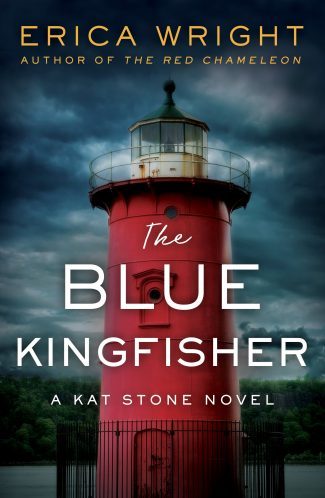 What happens when a master of disguise tries to be herself for once? In the third book of Erica Wright’s Kat Stone series, The Blue Kingfisher (available Oct 23, 2018), trouble seems to find Kat with or without her favorite wig.

Readers were first introduced to Kat Stone and her detecting techniques in The Red Chameleon (Kat Stone #1). Her disguises serve her well.

As a private investigator, Kathleen Stone relies on her ability to blend into the background. Aided by her street-smart drag queen friend and the best wigmaker in New York City, she feels confident that her camouflage is up to snuff.

Kat is a solitary soul who craves privacy. Waking early one April morning, she heads out to her special place, Jeffrey’s Point Lighthouse of The Little Red Lighthouse fame. Kat’s mother introduced her to the lighthouse under the “Great Gray Bridge,” aka George Washington Bridge, when she was a child, starting her lifetime love affair with the tiny lighthouse no taller than the trees in Fort Washington Park. Is it spring fever that has her heading out? Hardly. New Yorkers know better.

The calendar may have said spring, but it still felt like winter, another charming aspect of my hometown; she bullied spring, letting tulips emerge then snapping them with frost or sometimes a full-blown snowstorm. It happened every year, and yet the flowers would return, their optimism downright quixotic.

Kat can relate. When she worked for the New York Police Department she often felt useless, but now, she “rather liked solving cases as a private investigator.” Like spring in New York, Kat doesn’t have a “safety net, sure, but no boss either.” Erica Wright’s fictional PI lives in The Heights, a neighborhood immortalized by playwright Lin-Miranda Manuel. Kat’s deeply ensconced in the day-to-day lives of her friends and acquaintances, but she didn’t expect to see the body of someone she knows on top of the Little Red Lighthouse.

When Kat Stone, master-of-disguise private investigator, spots a dead body atop the Jeffrey’s Point Lighthouse one morning, she recognizes the man as her apartment building’s maintenance man, Tambo Campion, a French expat.

Was it a suicide gone awry? Kat is flooded with memories of Campion: she keeps seeing his “dead, caramel eyes.”

I couldn’t shake the feeling that rushing to declare his death a suicide was insensitive, but I was probably looking for trouble where there wasn’t any. It wouldn’t be the first time I stuck my hand in a mousetrap, and, eventually, we learn our lessons, right? After we lose a finger or two?

Kat explores lead after lead hoping to get to the truth behind Campion’s death. Tambo Campion was a highly unusual building supervisor: worldly, capable, unusually receptive to the requests of the varied tenants, always carrying himself with French élan. When the tenants gathered together as the news of Campion’s death spread, Kat notices some aimless teenage boys are frantic and upset: “I could only pick up a few words over the other conversations: ‘jobs’ and ‘money’ and ‘martín pescador.’” Even knowing that a pescador was a fisherman, Kat can’t translate the idiom. She asks an older Spanish-speaking woman for help.

“Un martín pescador,” Señora Amador finally responded. “A kingfisher. Like the bird. Someone who finds jobs for boys like them.”
She didn’t have to say “immigrants” for me to know what she meant. It was an immigrant building in an immigrant neighborhood, and I would always be an outsider with my American birth certificate and American job, never mind my family’s stories.

The immigrant experience, the lives of the nondocumented immigrants, the hardscrabble existence of Tambo Campion’s people—Kat looks to them for answers about Tambo’s inexplicable death. She makes an intrepid guide, dodging shoals and sharks (literally) as she doggedly pursues the truth, undeterred by red herrings and blind alleys.

Acting normal when your insides were soupy required a healthy dose of make-believe with a side of can-do spirit.

Make-believe, convincing make-up and wigs courtesy of her drag-queen friends, plus a New Yorker’s persistence—these are some of the tools in Kat Stone’s toolkit. Erica Wright’s The Blue Kingfisher is a gritty mystery that’s grounded in the reality of life in The Heights.