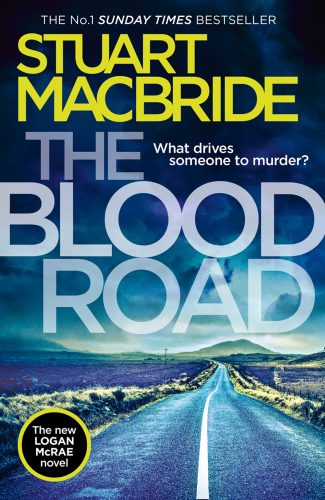 The Blood Road by Stuart MacBride is the 11th book in the Logan McRae series.

Professional Standards is a whole new world for Detective Inspector Logan McRae, who accepted the position of policing his fellow officers after one run-in too many with the kind of criminal who will break your faith in humanity as easily as breaking the bones of your body. Mostly, he tracks down police officers for reprimands, so he certainly isn’t expecting a call to the site of a random car accident. Sure, the driver was stabbed and bleeding out well before the wreck happened, but that has nothing to do with Professional Standards, does it? But then, the presiding officer points out to McRae that the dead man was a fellow Detective Inspector who was supposedly buried with full honors over two years ago.

DI Duncan Bell had committed suicide, setting fire to the caravan he was in before blowing his brains out with a shotgun. Or so everyone—his grieving wife and children included—had believed. Instead, Bell had run off to Spain to start a new life with a new family. Why he would have gone to such great lengths to do this is a mystery in itself, but what could possibly have lured him back to Aberdeen and to his doom?

Assisting McRae in this investigation is Detective Sergeant Simon Rennie, who perhaps has more enthusiasm than brains. Unfortunately for McRae, no one else is available, as they’ve all been set to the task of recovering Ellie Morton, a 3-year-old girl just very recently gone missing from her own backyard. In fact, before Bell’s corpse showed up, McRae had been trying to pin down Detective Sergeant Lorna Chalmers, who seems to be going rogue on the Morton investigation. But then, Chalmers’s body is found in another apparent suicide, and things get really crazy really fast.

Stuart MacBride has written another intensely gripping novel that puts our hero through the wringer, as McRae investigates people pushed to their limits and the violence that too often breaks out when desperation commingles with evil. Mr. MacBride doesn’t flinch when it comes to depicting casual brutality, as here, where a masked man known only as Number One is punishing a transgressor in front of a frightened female witness:

So she stands there and watches as boots slam into the man’s ribs and stomach. On and on and on. Hard and furious and unrelenting. The sound of muted crunching and dull thumps coils out across the cattle court, punctuated by muffled screams and grunts of exertion.

Number One keeps on going, even when the muffled screams fade away—stamping on his victim’s chest and head. Then more kicking and punching: on and on and on and on, long after the poor man is nothing more than a ragdoll made of meat and bone and Number One’s mask is peppered with tiny red dots.

Then, finally, the crunching, thumping noises stop and Number One sags against the railings, puffing and panting. ‘Fin … finished … Pfff…’

This kind of violence can be hard to read in large doses, but Mr. MacBride leavens his otherwise unrelenting, explicit view of Scottish crime with a wry wit and the wonderful, complicated relationship between McRae and Detective Sergeant Roberta Steel, who is commonly known as A Horror and is one of my favorite creations in recent criminal fiction. Having to wait 11 pages until she finally showed up in this book seemed like at least 10 too many, but I am a huge fan of McRae’s former boss and eternal tormentor/friend. I was filled with glee when they finally began to work together to puzzle out the case, along with Police Constable Quirrel, aka Tufty, whose enthusiasm for his job rivals Rennie’s as he volunteers to McRae of a suspect:

Rennie nodded. ‘I went on a course.’

‘Tufty: you’re going over to Chalmers’ house and looking for her mobile phone.’

‘No sausages. She texted her alleged “suicide” note at ten thirty on Friday night, so where’s her phone?’

Rennie perched on the edge of his desk. ‘Maybe she sent the message from somewhere else first, then went home and killed herself?’

Steel threw a whiteboard marker at him. ‘Well it’s no’ like she could’ve sent it afterwards, is it?’

Honestly, it was like being in charge of a kindergarten, full of delinquent drunken monkeys.

Mr. MacBride’s portrait of a police structure filled with employees of varying degrees of competence and ambition is reminiscent of the TV show The Office at its most hilarious and poignant. One could venture a comparison to that other excellent comedy Brooklyn Nine-Nine, especially given that the latter is explicitly about a team of cops, but The Office has always had, at least to me, a greater emotional savagery to it that’s more in keeping with the pathos of Mr. MacBride’s novels.

The Blood Road is another terrific entry in the outstanding Logan McRae series, and I’m only sorry that I still haven’t found the time to read the earlier novels that I bought in large bundles after falling in love with Mr. MacBride’s writing in the preceding installment, Now We Are Dead. This is something I must rectify before the arrival of the next book, which I’m already eagerly awaiting!