Review: The Tea Master and the Detective by Aliette de Bodard 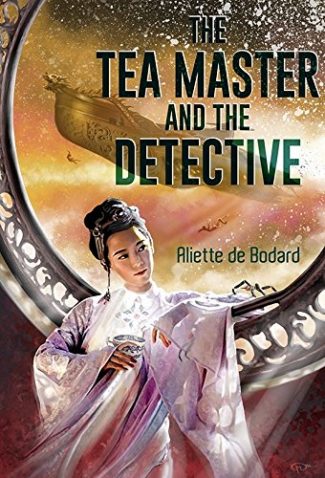 The Tea Master and the Detective

The Tea Master and the Detective by Aliette de Bodard is a futuristic take on the Sherlock Holmes archetype featuring a mysterious female scholar and thoughtful shipmind.

How to properly explain the bounty of imagination enclosed within the pages of Aliette de Bodard’s latest novella? It is, above all, a detective story inspired by the immortal tales of Sherlock Holmes but with several defining twists. First, the Sherlock character is a woman, as is the Watson-esque partner. Second, both are Asian in a decidedly Asian setting. Third, the entire thing is set in a far future where our Watson is really a shipmind—a ship given sentience by the melding of its technology with a human-born entity bred for this purpose.

As the book opens, The Shadow’s Child is a decommissioned military transport who, after traumatically losing her crew in deep space, is trying to make ends meet by brewing specialty teas for space-going travelers. Long Chau, a rather mysterious scholar, hires The Shadow’s Child to make her a tea for serenity, as she intends to travel into deep space to retrieve a corpse—any corpse—for study. The Shadow’s Child is somewhat reluctant given that her scans show that Long Chau is clearly already using a number of drugs, but she doesn’t want to turn away a paying customer. Besides, she’s confident enough in her skills to know that she can most likely brew Long Chau a tea that won’t react badly to all the other drugs coursing through Long Chau’s system, something that not many other brewers might successfully manage.

The downside of all this, though, is that she feels responsible for Long Chau’s continued well-being while on the tea. Her decision to monitor Long Chau’s progress unfortunately commits her to return to deep space, a place she would rather not go. While Long Chau pays well for the privilege, this dive into the mind-bending realms that allow ships to travel faster than light will raise more questions than it answers when the corpse they recover seems to have been a victim of foul play.

I loved how fresh and extraordinary this take on the Sherlock-Watson dynamic was. Despite Long Chau and The Shadow’s Child being very much their own characters, it was lovely to see that very familiar relationship reinterpreted, with the emphasis put less on Sherlock’s astonishing deductions in the face of confounding dilemmas and more on the interior lives of our protagonists. Not that there aren’t any elegant solutions presented to us in the style of Sir Arthur Conan Doyle, as here when Long Chau and The Shadow’s Child are talking about the former’s drug problem, with Long Chau saying:

“It would be neat, wouldn’t it? An easy and sympathetic explanation. Well, I’m sorry to disappoint. I simply need the drugs to function. That’s all there is to it. Life isn’t easy and neat.”

“You make it sound like it is. When you make your deductions from the smallest scraps of evidence.”

“When I deduct things? You’re mistaken. The world is chaotic and without sense. But in the smallest of spheres it’s sometimes possible to straighten things out; to make it seem as though everything means something.”

I especially enjoyed the emphasis on The Shadow’s Child’s interior life. I’m a huge fan of the BBC’s version of John Watson, which places his war heroism front and center and makes it clear that Sherlock needs him as much more than just a rhetorical sounding board (though the Elementary TV show is by far my favorite version of any Sherlock retelling to date; but I digress). The Tea Master and the Detective continues in this vein of having the Watson-character be the strong, emotional center of the story. We learn a lot about The Shadow’s Child’s history and sense of self, particularly in this illuminating passage on the way she chooses to present herself to her clients, in all her intimidating glory:

She could have made herself small and unthreatening. She could have hovered over people’s shoulders like a pet or a children’s toy, as was the fashion amongst the older shipminds. But she’d lived through a war, an uprising and a famine, and she was done with diminishing herself to spare the feelings of others.

It was also pretty great how she did her own investigating into Long Chau’s life and shadowy past and how the two methods of investigation—Long Chau’s through observational deduction; The Shadow’s Child’s through brute force data mining—both clashed with and complemented one another.

The Tea Master and the Detective is a forward-thinking reimagination of the beloved Sherlock-Watson dynamic that will definitely please lovers of Sherlockiana as much as it will science fiction fans, as well as fans of diversity in fiction. I’m hoping this novella is the first of a series featuring our heroes and their hopefully long and beautiful friendship.