Review: Take Out by Margaret Maron 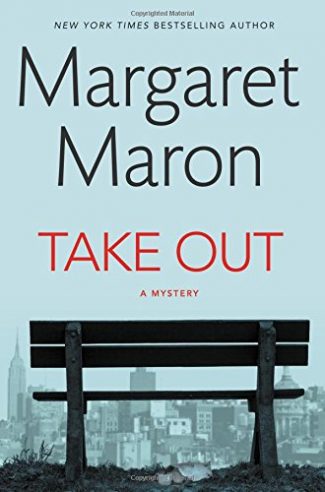 If you’re looking for an elegantly written mystery with a distinct New York flavor, you really can’t go wrong with Margaret Maron’s ninth novel featuring NYC Detective Sigrid Harald—it’s no wonder it’s an Agatha nominee. This is my first novel by MWA Grand Master Maron, and you can be sure that I’ll be going back to the beginning of the series, which started back in 1981 with One Coffee With. In Take Out, Sigrid is still grieving for her lover, the famous artist Oscar Nauman, who died almost a year prior. Oscar disrupted her carefully ordered life, and his death was a shock—especially since it still holds so many questions for her.

After all these months, time had blunted the worst of her grief, but she still had irrational bursts of anger that his cavalier driving habits had done this to them both.

From the skid marks left on that mountain road in California, the reporting trooper theorized that Nauman had been driving much too fast to make that hairpin turn. What was he doing up in those hills anyhow? As chair of Vanderlyn College’s art department, he was supposed to be attending a meeting of the College Art Association in LA where he and Buntrock were features speakers, not off sightseeing in an unfamiliar car. Yet, while Buntrock met with colleagues at the Getty Museum, Nauman had taken their rental car for a long drive out in the hills, where he lost control and plunged over the edge of a mountain road into one of the canyons.

You can imagine her shock when she found out that Oscar left her everything he owned, including his considerable fortune. Not one to let that go to her head, Sigrid is doing her best to get on with her life and her job while sorting out Oscar’s estate.

Plenty of distraction comes in the form of two men who are found dead on a park bench. Both men are found slumped over on the bench with a bag full of takeout nearby. Turns out there are a few people locally that leave their leftovers for the homeless, and when the autopsy results come back, the news is grim: the men have been poisoned by warfarin, which is commonly found in not only rat poison but blood thinner as well. One of the men is Matty Mutone, who was known for claiming a connection to the Mafia, which he did have … of a sort. A woman living nearby, Sofia DelVecchio, was his godmother, and she’s also the widow of a well-known mafia don, Benito, aka “Benny Olds.” The other man is eventually identified by another neighbor, a famous opera singer named Charlotte Randolph, as Jack Bloss, who worked backstage at the opera.

It’s these two compelling women and the possible feud between them that make up the heart of the mystery. They’re both keeping secrets, and Sigrid suspects they may have had something to do with the men’s death—but why? Complicating matters for Sigrid is the shocking appearance of Vincent Naas, also known as Vincent Nauman. He claims to be Oscar’s son from a previous relationship and that his father was apparently never told about him.

Maron weaves a very tangled web of secrets, lies, and family ties. I suspect that since it’s been quite a long time since the last book, Fugitive Colors, was published in 1995, Maron made an effort to catch new readers up to some of Sigrid’s background, and new readers, like myself, may get lost. However, this didn’t take away from the story for me—in fact, all it did was make me want to go back and read the series from the beginning. Sigrid is a fascinating character: no-nonsense and a bit sharp around the edges but with a vulnerability—one that is especially poignant when it comes to her love affair with Oscar. Character-driven mystery doesn’t get much better than this, and I can see why Maron’s work has garnered so many awards. I’ve heard this is her final book, and if so, what a finish to such a distinguished career.