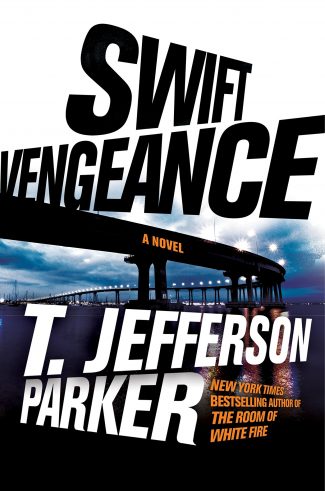 Swift Vengeance by T. Jefferson Parker is an incendiary new thriller where Roland Ford hunts down a mysterious killer, jockeys for position with the FBI, and risks everything to save a friend in terrible jeopardy.

The Room of White Fire introduced the fantastic ex-cop, ex-Marine pilot Roland Ford, and it’s hard to believe that the second book in the series, Swift Vengeance, is even better. Taking place less than a year after the explosive events of The Room of White Fire, PI Roland Ford is as settled as he can be in the California home that used to belong to his deceased wife’s family. He rents out six casitas to an eclectic cast of characters, including a coyote researcher who uses drones as well as Ford’s grandparents, who occupy separate casitas. His only job at the moment is the search for a missing 22-pound, green-eyed cat named Oxley, who belongs to Tammy, an elderly woman who pays Roland in her homemade fruit preserves.

The relative calm is about to be broken, however, because a woman named Lindsey Rakes needs his help.

The first time I saw Lindsey Rakes she was burning down the high-stakes room in the Pala Casino north of San Diego. Roulette, and she could do no wrong. Big woman, big attitude. Daughter of a Fort Worth area Ford dealer—“Hit Your Brakes for Rakes!”—and a high school chemistry teacher, I found out later.

That was two and a half years ago, and things have changed.

She looked not very much like that booze-fueled gambler who had moved onto my property the day after we’d met in the casino. Now she looked defeated and afraid. She wore a faded denim blouse and her hair was lumped into a ponytail that rode side-saddle on her shoulder.

Lindsey presents a note she received—written in what looks like English longhand and Arabic calligraphy—in which someone called “Caliphornia” tells her that they are going to decapitate her and that she should fear everything she sees, hears, and dreams. It’s short but terrifying, and it’s very effective.

Lindsey is asking for Roland’s protection, and he can’t say no. It’s unthinkable that someone would want to hurt her, but there actually is something in her past that may lead Roland to the person that is threatening her: she used to be an Air Force drone operator for a flight crew called The Headhunters, who operated out of Las Vegas and were responsible for bringing down some very bad guys. But not all missions went without a hitch. As Roland digs, it’s becoming increasingly possible that Lindsey’s threat may have to do with one of her missions.

Roland wants to notify the FBI, but Lindsey has a lot at stake and a lot of baggage.

After six months as a civilian she’d fled to California, landed in the Pala Casino, and ended up renting a place here on my property. Back then, as we began to get to know and trust each other, she’d told me about her life at Creech: the six-day work weeks, the twelve-hour days, the strange psychosis brought on by sitting in an air-conditioned trailer in the desert and flying combat missions 7,500 miles away. Then heading off-base at sunrise to pick up something for breakfast and maybe some vodka, too, on her way home to husband Brandon, and their young son, John. Little John. The light and anchor of her life. But not quite enough of an anchor.

Her drinking and PTSD were enough to trigger a separation from her husband, including few-and-far-between visits with her now-9-year-old son, John. Lindsey’s in a better place now, but this kind of thing could throw a huge wrench in getting her husband and son, and her life, back. So John goes to the only person he can think of that might be able to keep this on the down-low for just a little while: Special Agent Joan Taucher, who has her own very sharp bone to pick with terrorists as well as a single-minded drive to take them down. Joan can’t resist taking the case, but she feels like it may be taken away from her by her colleagues if she’s not careful. Luckily, Roland can do things that the FBI can’t, and he and the prickly Joan make a good team. They’ve both got pain in their pasts that unites them along with an innate core of goodness that guides them.

As the body count grows—and boy does it grow in gruesome ways—Roland and Joan begin to close in on a homegrown terrorist that is determined to drench innocents in buckets of blood. Once the action starts, Parker doesn’t let up on the gas, and the final confrontation is a doozy.

I’m not going to lie, this timely and terrifying story packs an emotional punch, and I shed a few tears. It’s powerful stuff, and Parker is a master at giving his readers exactly what they want in a good thriller (plenty of action and thrills) while not skimping on fully realized characters with relatable and, at times, tragic motivations. This is also a fascinating exploration of a little-known area of the military—remote drone operators—and how they cope with their missions and their aftermath as well as how, under the right conditions, someone can be radicalized and driven to murder. It’s frighteningly easy and all too common.

I’ve been a fan of T. Jefferson Parker for at least 20 years now, and he’s a highly versatile author that just keeps getting better and better. This series finds him at the top of his form, and I’ll be the first one in line for the next Roland Ford novel.

Read an excerpt from Swift Vengeance!