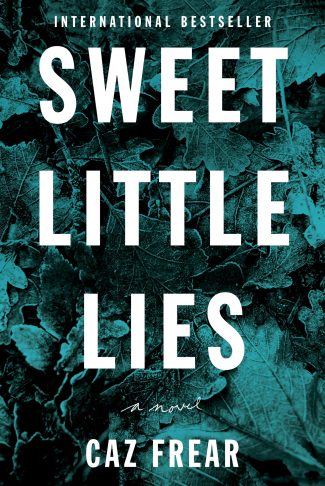 Sweet Little Lies by Caz Frear is a gripping debut procedural where a young London policewoman must probe dark secrets buried deep in her own family’s past to solve a murder and a long-ago disappearance.

I have a love/hate relationship with debut novels. On one hand, there’s the chance I’ll discover a wonderful new author who has many other great books up their sleeve; on the other, it could be a total dud. Luckily, Caz Frear has come out of the gate with a corker of a thriller, introducing us to a firecracker of a new copper in the form of the fascinating London-based DC Catrina “Cat” Kinsella.

It’s immediately made clear—by Cat herself—that she has an empathy problem. Most folks wouldn’t consider that a problem, per se, but she tends to over-empathize with murder victims and attends mandated therapy to get a handle on it. Evidently, her reaction after witnessing a particularly brutal crime scene put her boss, the singular DCI Steele, on high alert.

“Oh come on. You don’t get all those letters after your name for being gullible. Steele’s covering her arse, plain and simple. She’s worried I’m going to start wailing ‘PTSD’ if someone has so much as a nosebleed, so she’s dumped the problem on you.” I know I sound snide and disrespectful and a whole host of other things that I try hard not to be, but I’m a work-in-progress, what can I say. “Sorry, no offense…”

In spite of a few personal issues (she’s believably flawed, self-deprecating, and very human—you’ll love her), she gets along well with her older partner—DS Luigi Parnell, a devoted husband and father of four—and seems to be generally well-liked in her department.

Now that a bit of background is out of the way, page one drops readers right into the middle of a crime scene, a particularly brutal one, at that. Alice Lapaine has been dumped in London after (probably) being strangled. She’s also got a bunch of cuts on her neck that weren’t fatal but are gruesome and disturbing nonetheless. After questioning Alice’s husband, Tom, who has no alibi whatsoever, everyone seems willing to believe he’s their main suspect—except Cat, who has trouble believing he would fly off the handle, kill his wife (who he seems to genuinely love despite their problems), and dump her 20 miles away.

Alice was an odd one, though. She would disappear for days at a time—this time for a month. If Tom wasn’t ok with it, he seemed at least resigned to it, claiming she frequently needed time to herself and that he had no problem giving it to her. They’d also had trouble conceiving and had been trying IVF to no avail, but fertility problems certainly aren’t a reason to kill someone. Police even have the dump on CCTV, but it’s impossible to see enough details to identify the perpetrator.

As Cat and her partner dig into Alice’s life, they discover that she worked a few hours a day at a local pub—although they really didn’t need the money—and that she had literally no one that claimed to be a close friend of hers. It’s a little strange, but to Cat—who really doesn’t have any super close friends herself—it’s not damning. She can relate. Actually, she can relate in more ways than that. When her partner calls her with a detail about Alice, it turns Cat’s world upside down.

It’s actually a potent little shocker, dropped pretty soon in the narrative, and as much as I’d love to share, it would ruin the fun. I can tell you that it connects to something in Cat’s childhood, and I’ll leave it there.

Speaking of Cat’s childhood: Her mother passed away a few years ago, and her relationship with her (very) philandering father, Michael McBride, is fraught. Cat is convinced he’s got his fingers in some sort of criminal enterprise, and she has always suspected he knows something about the disappearance of 17-year-old Maryanne Doyle in 1998—even if she’s never been able to prove it. The new info has Cat digging into her past, and what she finds is, well, interesting, to say the least.

Frear has churned out a very assured, accomplished debut that’s quintessentially British and compulsively readable. So if you like British procedurals mixed with dysfunctional family drama, this one’s for you, although Cat makes it so very unique. This isn’t just a murder mystery (with quite the shocking twist, I might add), it’s also Cat’s coming of age. Yes, she’s 26, but she does a lot of growing up in this book, and her growing pains will just make you love her more. I really can’t say enough good things about this one, so you’ll just have to add it to your must-read list and find out what I’m gushing about. Caz Frear is now on my instant-buy list, and I can’t wait for her next book.

Check out Michelle Carpenter’s review of Shed No Tears, the 3rd in the Cat Kinsella Series!