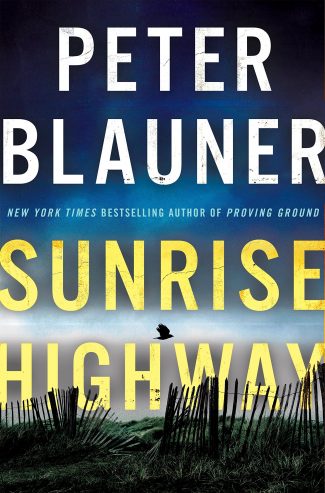 Sunrise Highway by Peter Blauner is a new thriller about a lone young cop on the trail of a powerful killer determined not just to stop her but to make her pay.

Take a Visual Tour Through Sunrise Highway with GIFnotes!

Unfortunately, I didn’t get a chance to read Blauner’s first novel starring singular NYPD detective Lourdes Robles, Proving Ground. If you haven’t either, don’t worry, because you’ll have no problem jumping in with this one. And talk about jumping in. Blauner throws us into the deep end of things right off the bat. The book opens with a sequence taking place five years ago, in 2012, on Long Island during Hurricane Sandy. It’s apocalyptic. Cars are floating away, debris is flying, and a young pregnant woman is desperate for help, so she knocks on a door.

As he went to look out the peephole, he could hear the wind howling and feel the storm trying to get in the house. Just standing by the threshold put the dampness in his bones. Someone was on his doorstep. A silhouette with long dripping hair. Like a wraith from a Japanese horror movie, with curtains of wild monsoon rain moving back and forth behind it.

“Hello?” it called out in a high shaky voice. “Is anybody home?”

He kept his eye at the peephole.

Unfortunately, the owner of the house has no interest in letting her in.

It was awful the way his voice cracked when he was stressed and made him sound more like his mother than his father. He should have kept pestering his brother, the big New Jersey state trooper, to help him get a gun a few years ago, instead of letting the subject drop when it was suggested that he could drive to Pennsylvania or Florida and buy one himself with just a driver’s license. Obviously, that wasn’t going to happen. But now he was here by himself, abandoned and defenseless, with this creature at his door, demanding to be let in.

“I know what you’re thinking,” she called out. “But someone is after me. And if they find me, they’re gonna kill me.”

Cut to 2017, and NYPD Homicide Detective Lourdes Robles and her partner, Robert “Beautiful Bobby” Borrelli, are called to the tip of Far Rockaway, where a plastic-wrapped body has been pulled from the water. Lourdes gets a look, and after determining that it’s probably a female, she notices that there are rocks stuffed in what’s left of the esophagus. It’s a horrifying and unusual discovery, and although Lourdes’s colleagues are quick to jump to theories about MS-13 and gang killings, Lourdes isn’t so sure.

Getting an ID is critical, but finding out what happened to this person isn’t the only thing on Lourdes’s mind. Her sister Izzy is missing, and she’s been accused of using department resources to search for her. It’s a possibly dire situation because Izzy is mentally ill, and she could be living on the street or worse.

Luckily, Lourdes has the support of her mentor—the recently retired detective Kevin Sullivan—and her live-in boyfriend, the besotted and frequently beleaguered Mitchell Vogliano, a lawyer from the Brooklyn DA’s office. They’re an odd couple, to be sure, but they work. This support system is important, but not because Lourdes isn’t capable. Quite the contrary. Aside from some brash, sometimes impulsive tendencies, Lourdes is a sharp, dogged investigator.

But this case is special—because the killer (and enthusiastic rapist) is a cop.

Don’t worry, that’s not a spoiler. In fact, the perpetrator is revealed fairly quickly. Blauner accounts cop’s son Jeffrey Tolliver’s rise as he goes from a witness for the DA in a 1977 murder case (in which an innocent black teen is convicted) all the way up to his final roosting place as Long Island police chief. Along the way, Tolliver racks up so many favors that he can do just about anything he wants and no one will touch him. And boy does he.

The book gets its name from NY 27, a stretch of highway that traverses nearly the whole of Long Island. It’s where young cop Tolliver chooses many of his female victims in between legitimate traffic stops. Tolliver is mean, driven, smart, and cold as ice. He researches serial killers to make sure he doesn’t make the same mistakes as they do. He gets married “for cover” (the way he meets his wife is a doozy) and puts on a charming façade. Nearly everyone is afraid of him, including the DA, which he basically made because of his testimony in ’77.

From the moment Lourdes meets him, she feels something is off. She doesn’t immediately suspect he’s a killer, but her internal antenna is definitely quivering. Unfortunately, nearly every Long Island cop stands in her way, and the corruption goes way higher than just the police. So what does Lourdes do when nearly every roadblock is thrown in front of her? She puts her head down and resolves to get her man.

You’ll never meet a more driven cop. I love Lourdes. She’s brash, bitingly funny, and is determined not to let her fraught upbringing define her. She’s also very aware that she’s part of what is largely a man’s world and doesn’t bow to that for a minute. For those of you who think serial killer thrillers have been done to death (sorry), think again. Blauner has the touch, and Tolliver is one of the scariest creatures to crawl out of the muck in a long time.

This book is chock full of creepy, downright terrifying scenes—although Blauner expertly avoids exploitation and gore. It’s easy to go that route with a story like this, but Blauner smartly resists. Instead, he uses his killer—and his wonderful heroine—to explore institutional corruption and the evil that absolute power can cause. It’s timely and will certainly resonate with readers who keep a close watch on current events. You won’t be able to put this one down.

Read an excerpt from Sunrise Highway!