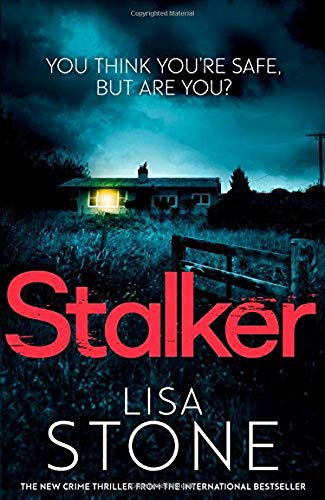 Stalker by Lisa Stone is a spellbinding thriller that will make you think twice about privacy and online security.

When most people hear the word “stalker,” it conjures up images of celebrity stalkers and people lurking in the bushes around someone’s house in the dark of night, ready to pounce. But Lisa Stone’s new book features a different sort of stalker, one perfect for the high-tech, digital age and a society often obsessed with personal security and safety.

Derek Flint is 41 years old, lives with his bitter mother—whom he’s had to care for alone since his dad left them many years ago—and runs his own modestly successful home security business called, well, Home Security. His customers’ trust is very important to him, and he’s not above doing a bit of research on potential clients before trying to sell them on his services.

He knew that the owners, Julie and Russ Williams, were a married couple in their late thirties with two young children, most of which he’d discovered from the Internet, together with photographs of their last family holiday, and the children’s birthday parties held in the back garden. So he had a picture of the rear of the house—just like the thieves. If people knew how accessible their information was they’d be more careful sharing it.

The Williams family just had a break-in that resulted in Russ getting injured, so they’re eager to get a system installed that will not only keep them safe but make them feel safe. No worries because Derek is on it. Derek actually does care about the families that call him for help, but he spies on them too, so it’s a very special kind of caring. His favorite thing to do at night is sit down at the array of monitors in his room and watch the feeds from a few of the homes and businesses where he’s installed security systems. It makes Derek feel an odd sense of security—and a very sad sense of family belonging.

He clicked on the speaker symbol to engage the microphone in the camera—a little additional touch his clients didn’t know they had. Russ and Julie—he felt he knew them well enough now to use their first names—were discussing next year’s holiday. They were thinking of taking the children to Disney World in Florida. Very nice, lucky kids. Derek smiled to himself. They were a lovely family and he was pleased he could help them.

Isn’t that nice? Unfortunately for Derek, his customers start experiencing things like break-ins and attacks, and it doesn’t take long for DC Beth Mayes to see a connection. Getting her superiors to see the connection and let her follow it all the way to the end is an entirely different story. The attacks are increasing in intensity, however, and it’s up to Mayes and her partner to separate the wheat from the chaff. Is Derek responsible for the attacks and his customers?

Stone doesn’t make the coppers the focus of this story. This is not a procedural. Beth and Matt have some fun banter, and Beth is just the right amount of dogged to get the job done, but they’re peripheral to the story. Derek is the focus, and although he’s undeniably a creepy guy who crosses all kinds of moral and ethical lines, as he reveals his background and his utter, all-encompassing loneliness, it’s tough not to feel sorry for him.

Stone keeps the pace fast and her prose lean, and the last quarter is a breathless race to the finish. If this book doesn’t make you want to delete your Facebook and other social media accounts and eye every camera with suspicion, I don’t know what will. This is a fun, fast read for a rainy weekend.