Review: Something in the Water by Catherine Steadman 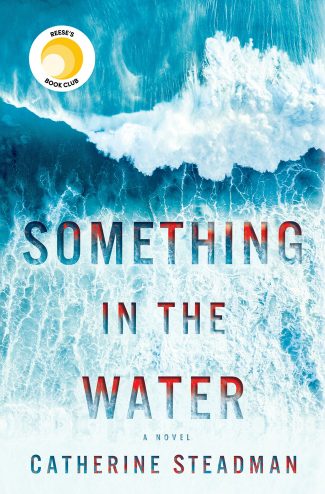 Something in the Water

Something in the Water by Catherine Steadman is a taut psychological thriller debut, where a shocking discovery on a honeymoon in paradise changes the lives of a picture-perfect couple.

Something in the Water opens with a bang. A woman is frantically googling the mechanics of how to dig a grave while wielding a shovel. A mesmerizing rabbit-hole indeed. Who is she burying? The backstory might be TBD, but we’re not held in suspense too long as to the identity of the corpse—it’s her husband.

Debut author Catherine Steadman slowly unfolds the why. Time is scrambled, much like human memories, as we find out what unfolded and how the seeds of Chapter 1—entitled “The Grave”—were planted. The body is hidden under “a torn tarpaulin, its brilliant cobalt a slash of color against the brown forest floor.” Slyly, the provenance of the tarp emerges. The narrator spotted it months earlier, hanging on a branch, near a forgotten fridge.

The fridge has been here a while—I know this because I saw it from the car window as we drove past here three months ago, and nobody has come for it yet. We were on our way back to London from Norfolk, Mark and I, after celebrating our anniversary, and here the fridge still is months later. Odd to think so much has happened—to me, to us—in that time, but nothing has changed here.

Chapter 2, “Anniversary Morning,” opens like a piece in Tatler, outlining a perfect weekend getaway at “a boutique pub hotel on the Norfolk coast.” Celebrating the day when first they met, the anniversary couple hike, frolic in the sea, and linger over delicious meals, all between bouts of lovemaking. Their hotel “is a perfect country nest of fresh seafood, cold beer, and cashmere throws.” They’re the golden couple. “Erin is a documentary filmmaker on the brink of a professional breakthrough, Mark a handsome investment banker with big plans.”

But musings leave a trail of breadcrumbs, explaining the brutal opening of the story. Erin thinks about her husband’s career. He’s a banker. His career ticked along nicely, until it didn’t.

Mark moved forward fast in the City, passed his regulation exams, became a trader, specialized in sovereigns, got poached, got promoted, and then it happened. The financial crash.

Things changed for him after that. Although his technical financial expertise ensured his continuous employment, many of his friends and colleagues were fired. Fed up with doing the work of five people, Mark went to another bank. Erin didn’t care for it.

The new bank, I don’t like. It’s not quite right. The men there manage to be fat and yet sinewy at the same time. They’re out of shape, and they smoke, which I didn’t used to mind at all, but now it has that air of nervous desperation. That worries me. It smells of bile and broken dreams.

What a palpable description of tension and unease. Erin’s professional life, like Mark’s, looks good on the surface, but there are disquieting ripples. She has been working on a documentary about prisoners, tracking them behind prison walls and after release. The jewel in the crown is Eddie Bishop, “the real coup, an absolute dream for a documentarian,” because of his deep ties to English gangs. Eddie handled everything from money laundering to murder. Like Al Capone, it is financial malfeasance that puts him away. Creepily, Eddie tweaks Erin on her upcoming marriage when they speak on the phone.

“Hello, sweetheart. Nice to hear from you. Locke, is it? Not a Roberts yet then? When’s the big day?” He asks it cheerily, off the cuff.

It has been an enormous struggle to move from phone interviews to being inside a prison speaking to her subjects directly. In Chapter 4, “Interview One,” Erin is interrupted by her husband—he’s been fired.

He can’t have forgotten, can he? I’m in a prison holding room. Shit! Please don’t need me there now, Mark. Please be okay.

Oh fucking hell. Those two constantly tugging needs: your own life and “being there.” Your relationship or your life.

It becomes increasingly clear that Erin and Mark’s relationship and their professional lives are intertwined, although that’s the furthest thing from their thoughts as they plan a wedding. Their dream honeymoon is compressed from two months to two weeks.

Passionately in love, they embark on a dream honeymoon to the tropical island of Bora Bora, where they enjoy the sun, the sand, and each other. Then, while scuba diving in the crystal blue sea, they find something in the water.

Spoiler alert time—the “something in the water” is a game changer. Between feverishly reading ahead and doggedly searching for clues in the early chapters, readers are trapped on an inexorable rollercoaster. It almost feels Faustian: what bargains were made to get Erin and Mark to this place?

Catherine Steadman’s other string to her bow is acting. The English actor is perhaps most recognized for her portrayal of Mabel Lane Fox in Downton Abbey (Series 5). Doubtless, Steadman is already entertaining bids to bring her tense psychological thriller to the screen. It’s a terrific debut.