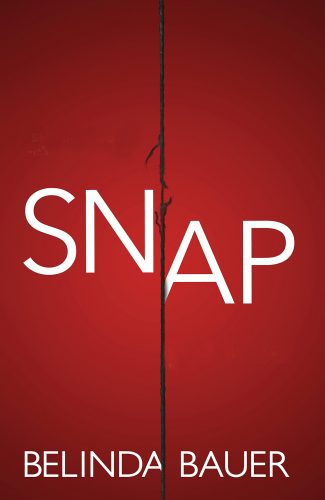 Snap by Belinda Bauer is a gripping, masterfully written novel about a teenage boy’s hunt for his mother’s killer.

I feel like it’s weird to describe a book about pregnant women either being murdered or threatened with murder as “delightful,” but it’s hard not to finish Belinda Bauer’s Snap without feeling utterly charmed. Don’t get me wrong: this is a thriller through and through. Ms. Bauer begins with an incredibly dark opening where three children are left on the side of the highway in their broken down car while their pregnant mother walks to the nearest emergency phone to ring for help. Jack, the 11-year-old, is left in charge of his younger sisters, Joy and Merry, as they wait for their mother to return. But she never comes back, and far too soon, Jack realizes he’s in charge for good.

This obviously isn’t great for a boy’s emotional development, and as the book progresses, we learn what he has to do in order to keep what’s left of his family together—as well as the emotional toll this takes:

Jack couldn’t remember a time when he wasn’t angry.

It was always there, like an itch. Sometimes low and ignored, sometimes so big and sore that his slight frame could not contain it, and it burst like a boil, spewing violence and bitter hatred that left him hollow.

For a short while.

He always filled up again. Easily, and to the brim.

He wished it would stop. He wished he could stop […] Sometimes he felt as if he’d never left that road. Or that day. As if he’d been stuck there ever since his mother had disappeared, and everything that had happened since was a dream, a mirage, a fake life that he couldn’t discover how to escape.

Three years after Eileen Bright’s disappearance, another pregnant woman is home alone when she thinks she hears an intruder. Unwilling to be a passive victim, Catherine While scares him off but returns to her bedroom to find a knife on her bedside table with the note, “I could have killed you.” Though frightened, she isn’t sure what to do next; she doesn’t want to worry her husband who often travels for work or, worse, smother herself with concern, so she burns the note, hides the knife, and tries to pretend it never happened.

Meanwhile, a series of burglaries are bedeviling the local police, drawing in the newly transferred (read: demoted) Detective Chief Inspector John Marvel to join a somewhat motley team in pursuit of a thief they’ve nicknamed Goldilocks. The way these three plot lines intertwine to form a thriller that is tragic, darkly comic, and luminous is a testament to Ms. Bauer’s impressive skill as a writer. The plotting is ingenious, the characterization strong, and the writing itself often hypnotic, as here, when DCI Marvel is examining a specialty knife that could be related to both Eileen Bright’s killing and Catherine While’s intruder:

The abalone was a turbulent storm cloud, captured and tamed by the smooth, warm handle that fitted his palm like magic. He touched his thumb to the diamond stud and the knife seemed to open itself! Seemed to know that he wanted it open, and obliged before he’d exerted any noticeable pressure. No hesitation. No notches. No friction. The blade sprang open like a living thing, alert to his every wish. Serrated on one edge, curved on the other to a cruel point.

Marvel was almost embarrassed by how magical it felt. He felt so connected to it! And he wanted to use it. Wanted to see what it could do. Wanted to cut and to stab and to slice. To carve his name in something.

Snap is a wonderful novel that reminds me of Kate Atkinson’s Jackson Brodie series if the primary investigators were a grumpy, frumpy DCI in an uneasy partnership with an angry, motherless 14-year-old instead of Ms. Atkinson’s hunky private detective. I know it doesn’t make sense to have Snap be the first in a series, but I was so utterly charmed by Jack and DCI Marvel that I’m hoping they’ll make future appearances in the rest of Ms. Bauer’s books, which I am already eagerly looking forward to reading.