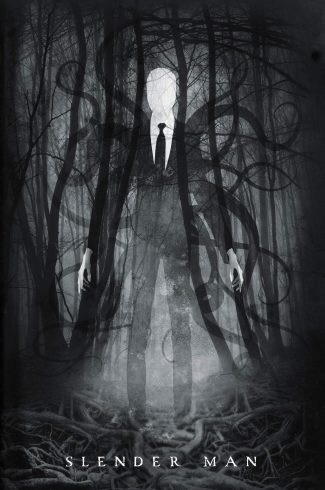 Chilling, eerie, and addictively readable, Slender Man is a unique spine-tingling story and a brilliant and frightening look at one of the most fascinating—and diabolical—mythical figures in modern times.

Just about everyone with internet access—especially kids plugged into the world of creepypasta—has probably heard of the Slender Man phenomenon. Crimes have even been committed in his name. The long, tall, humanoid figure with the tentacle-like appendages has captured tons of young and old imaginations alike. Anonymous (if you’re super curious and poke around a little, it’s not too hard to find out who penned it) has taken that urban legend and turned it into a creepy little tale that will keep the pages turning and the little hairs on the back of your neck standing up straight.

The story—which takes place over the course of about a week—is set among privileged high schoolers in New York City, particularly Matt Barker, who is being forced to attend therapy because he’s been having nightmares that have been affecting his sleep. He’s not thrilled with it and has been giving the doc a bit of the runaround. Little does he knows that those nightmares are going to take on a whole new meaning very soon.

One morning, Lauren Bailey walks out of her parent’s building at 3:14 a.m. and doesn’t return. Matt, who has known her for years, isn’t too concerned. Lauren is … different, and it wouldn’t be unusual for her to disappear for a few days. But as the hours wear on, Matt, her friends, and their school begin to feel the first touches of real fear—fear that something terrible might have happened to her.

Matt, for his part, is still dealing with nightmares, and he’s been sharing some of his writing on Reddit. Someone even compares his story with Slender Man, and since it concerns the disappearance of a young girl, the parallels are, well, creepy. Of course, rumors are flying, and speculation about the state of Lauren’s parent’s marriage leads to speculation that Lauren just might have had enough and walked away. But Matt doesn’t think so.

She has a temper that I know is sometimes shorter than she would like it to be, but she’s not the kind of person who would actively try to hurt anyone, who would take pleasure in watching the people she loves suffer. I’m absolutely certain that if she actually has run away, she would have left her parents a note or texted them or given them a call to let them know she was OK. The Lauren I know wouldn’t want them to worry.

Which is why there’s this hollow feeling in the pit of my stomach, even though it’s barely been eighteen hours since the last time anyone saw her.

Because I can’t help thinking that something bad has happened to her.

This feeling continues to grow as time goes on, and Matt’s nightmares get much worse. He’s also begun sharing some of his fears, via email, with someone from Reddit, and this person, who calls himself Ryan, doesn’t assuage his fears. In fact, Ryan tells him that he’s dealing with something that isn’t to be trifled with and that Lauren could very well be in real danger.

One night, after waking up at the exact time Lauren went missing (which is becoming all too common), he has an experience that convinces him that Lauren needs his help. He wakes up to a ringing phone that shows nothing on the screen, and for Matt, what follows is nothing short of terrifying.

I answered it and held it to my ear and for a long moment there was nothing, then I heard something in the distance, like a rustling sound, and something else underneath. I listened and I listened and then I understood, and once I did I could hear clearly.

Wind moving through the branches of trees.

Water lapping at the edge of a lake.

Matt listens for a while, almost lulled by the sounds. But then—

Then a voice whispered in my ear and I dropped the phone because I clamped both my hands over my mouth so I didn’t scream.

Matt heard a voice, one all too familiar, and the voice said, “Help me.”

Most people would think they were going bonkers, but when Matt is visited by a figure that looks like the Slender Man of lore, he knows that he won’t be able to rest until he goes after Lauren. Can he save Lauren without sacrificing himself?

Matt’s tale is told entirely through texts, transcripts of phone recordings, police interviews, and Matt’s journals, and it’s a pretty effective look at how things spread by word of mouth, the internet, and the sheer brute force of teen will. Those looking for gruesome scares and copious gore won’t find it here, but they will find a sense of creeping, low dread that the author builds to the breaking point with atmospheric imagery that probes the thin veil between reality and nightmares. This slow-burner is perfect for Halloween and offers up some effective creepy crawlies. Sweet dreams!