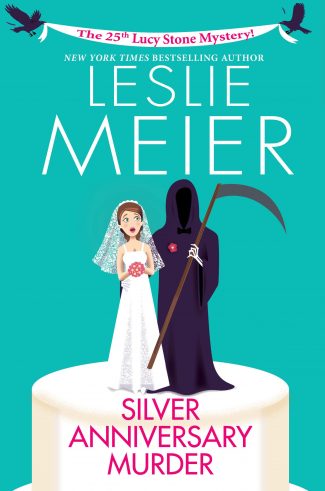 Silver Anniversary Murder by Leslie Meier is the 25th book in the Lucy Stone Mystery series.

It’s been 27 years since Leslie Meier introduced amateur sleuth Lucy Stone and the fictitious town of Tinker’s Cove, Maine, to readers in Mistletoe Murder—and there’s no indication of a slowdown. Two of her earlier novels, Trick or Treat Murder and Wicked Witch Murder, were just collected in Halloween Murder, and she’s got a novella featured in next month’s anthology, Yule Log Murder, which also includes stories from Lee Hollis and Barbara Ross (it’s a follow-up to 2016’s Eggnog Murder). But perhaps the most exciting release is Silver Anniversary Murder, which marks the 25th full-length entry in her venerable, holiday-centric series.

As the story begins, we find Tinker’s Cove in a tizzy over an upcoming town-wide silver wedding anniversary bash, orchestrated by Sylvia Bickford, who owns the local bridal salon—and who is celebrating 25 years of marriage to her long-suffering husband, Warren. Lucy’s editor at the Pennysaver assigns her to profile the Bickfords—known around town as the “Bickersons”—for an upcoming feature, though she fears Sylvia won’t come off well. Nevertheless, all the fuss gets Lucy thinking about her own marriage to Bill, their four children (two of whom have now flown the coup), and how she herself has changed through maturation—introspection that, coupled with the impending festivities, leads Lucy to try on her wedding dress:

Standing there and studying her reflection, she thought it wasn’t just her body that changed; she had changed, too. She was much more confident these days and much more assertive than she had been as a young bride. She was more open-minded, too, and less opinionated. Back then, she thought, she’d been a bit of a prig, convinced there was a right way to do things and a wrong way. Nowadays, she was no longer convinced that food colorings were poison, that childbirth had to be natural, and all plastic should be banned.

This reverie causes her to wonder what ever happened to her unlucky-in-love maid of honor, Beth Gerard; Lucy’s onetime/sometimes best friend, the impetuous Beth had a habit of disappearing with each successive romantic relationship— a pattern that’s held true through four failed marriages. A spontaneous phone call results in the unexpected news that Beth has just died as the result of an apparent suicide. Lucy, no matter how enlightened in the intervening years, has some strong opinions on the matter (of death).

And now, suicide. That was the ultimate betrayal, thought Lucy. Suicide was a huge slap in the face to everyone who loved you, to family and friends who would forever wonder why their love wasn’t enough. It left survivors with a huge burden of guilt, always questioning what they could have done differently, and whether they could have prevented that final, desperate act.

Devastated by the incident, Lucy is compelled to travel to New York City, where Beth allegedly jumped off of her penthouse terrace. While she feels a sense of obligation to be present for Beth’s son, Dante, she can’t deny the allure of a mystery, either. After all, upon pondering the circumstances of her friend’s untimely demise further, she comes to a realization:

There was no way, she thought, that Beth would hurl herself to destruction off a twenty-two story building. She was impulsive and emotional, sure, but she had recently invested many thousands of dollars in a face-lift and Lucy knew her friend would never risk damaging that newly firm chin line.

So off she goes—“Beth, I’m not sure you’re worth all this, thought Lucy, immediately ashamed of herself”—first for the funeral, and then for a more extended stay at an Airbnb when she realizes that the authorities are not considering foul play in Beth’s death. Like the author, Lucy is Bronx-born, and it’s a welcome coming home of sorts; a week away from the responsibilities of homemaker, and the daughters she suspects consider her an imposition, has a certain appeal—especially when Bill agrees to meet her there for a romantic weekend before she returns to Tinker’s Cove (and its single stoplight). Consequently, the book alternates settings, which Meier uses to full effect in balancing fresh elements with familiar ones against a backdrop of inherent contrasts between small town and big city.

As liberating as Lucy’s “vacation” is, the city quickly becomes equal parts exhilarating and overwhelming—particularly when Lucy’s investigation exposes her to the seedier side of things. She makes it her mission to meet with each of Beth’s ex-husbands (or soon to be)—a religious cult leader, an irascible artist, a shiesty chiropractor, and a billionaire businessman—in an attempt to discern which of them was most likely to have helped her take the plunge. It’s always the husband, right? Or one of them. A ripped-from-the-headlines plot twist results, landing Lucy in great peril—but also allowing her time to ruminate further on the state of her life and the many charms of her small-town home.

Though classified as cozies, the Lucy Stone books have always had an edge to them; in fact, Meier has long used the term “comedies of manners” to reflect their commentary on contemporary culture. Silver Anniversary Murder continues in this tradition, looking back with subtle reverence while also firmly catapulting Lucy and Co. into an uncertain yet inevitable future. And Lucy herself, for all her growth, remains utterly “real” in the sense that she embodies complexities and contradictions—the very things that make her (and us) human.