Book Review: Sidney Chambers and the Persistence of Love by James Runcie 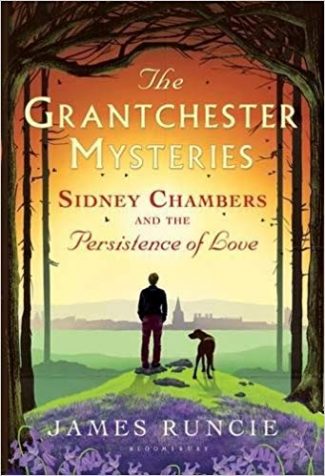 Sidney Chambers and the Mystery of Love

Sidney Chambers and the Persistence of Love by James Runcie is the 6th and final installment in the Grantchester Mystery series (available May 23, 2017).

Part-time sleuth and full-time priest, Sidney Chambers, is enjoying a beautiful May in 1971. Unfortunately, a peaceful walk gathering flowers with his young daughter, Anna, is ruined when the family discovers a dead body.

Although it was possible the man had died from natural causes, and there was probably a good enough reason for the plants he had been gathering, Sidney could not help but brood on the nature of fate, the chance of discovery and the possible sequence of events that had led up to that moment. He went to his study where he began to pray, seeking some kind of guidance, the beginning of understanding. Was it a sin to be so suspicious so frequently, or was he using the natural intuition that God had given him? Was his role as an accidental detective making him less loving and less effective as a priest?

As with the previous five Grantchester outings, Sidney Chambers and the Persistence of Love isn’t a straightforward novel; rather, it’s six loosely connected stories exploring variations of a theme—namely, love.

The first story, “The Bluebell Wood,” is the most straightforward mystery of the bunch, a tale of obsessive love turned toxic and murderous. At the heart of the narrative: a pair of couples who have been entangled in a romantic quadrangle for decades.

“Authenticity” touches upon the desires of art, prestige, and money. A minor bit of thievery at the church parallels with Sidney’s old friend and former flame Amanda’s acquisition of a painting she’s convinced is a lost Goya. Amidst the machinations of the art world, Sidney contemplates what makes something truly worthwhile.

He asked Hildegard what, for example, made a Bach piece better than anything by his pupils or his imitators?

“I think there has to be an authority of expression; a sense of control that is also combined with effortlessness—what the Italians call sprezzatura. It never shows how hard it is. It seems easy, natural, even if it is hard to play.”

“With music it needs interpretation and performance. It cannot just exist on the page.”

“It can. But it is meant for more than that. It also needs an audience to become itself; just as we always need other people to help us realise who we are.”

“Perhaps, then, there is no such thing as the authentic self? We are defined by our parents, our children, our friends and those we love. We are dependent on how other people see us and change us; and how we change them.”

The third story, “Insufficient Evidence,” is the darkest turn tonally, a case of he said/she said in a rape case that hits close to home for Sidney and detective pal Geordie. It’s an upsetting, infuriating tale that’s all too frequently seen on the news, where the victim is to blame for what she wore, how she smiled, or how flirtatious she was in mixed company. The “love” here was wholly unwanted and has far-reaching repercussions.

“Ex Libris” details the theft and ransom of a beloved religious text, while the penultimate story, “The Long Hot Summer,” has Sidney searching for a missing nephew. Has Louis fallen in love with drugs or a dangerous cause? Was he the victim of foul play or a bad bout of depression?

The concluding, most poignant, and titular tale, “The Persistence of Love,” sees our priestly hero wrestling with a terrible loss in the fall of 1976.

Runcie does a superb job of interweaving personal details into the central plots, slipping us colorful backstories, unexpected reminisces, and revealing what’s happened to previous characters since their last appearance. We see old Mrs. Maguire again, touch base with Leonard, and find Byron the Labrador a little creakier but still loyal and loving.

By the end of Persistence of Love, a full twenty years have passed since Sidney Chamber’s first appearance in Shadow of Death. Our curious man of the cloth has grown from a somewhat roguish, jazz-loving thirty-something into a steadier, more introspective fifty-something. He’s a devoted father and husband, on the road to becoming a bishop.

He’s had his fair share of personal tragedies and hard cases along the way, but as this sixth installment proves, he still has the tendency to see the silver lining in every cloud (as gruff friend Geordie complains over their usual round of backgammon). Sidney also remains, if nothing else, an incurable romantic:

When Sidney came back to Grantchester and told his friends that he was going to marry Hildegard, they had asked if this love was as secure as he thought it was. Did he want their advice? He had told them all—yes, even Amanda—that this was secure, and he could not imagine ever being with someone else. His love for Hildegard had an overwhelming sense of completeness that was like faith but more companionable. It was tender, honest, fragile, brave.

Sidney Chambers and the Persistence of Love is the final installment in the Grantchester series and a fitting last note. There’s plenty of bittersweetness to be had here. A sense of loss—the sadness of all things ending, be they relationships, jobs, or life itself—weighs down the aging cast.

Yet there’s no better message to leave with fans of the lovable priest than that of love in all its permutations: familial, romantic, platonic, and yes, even spiritual.