Review: Shot in the Dark by Cleo Coyle 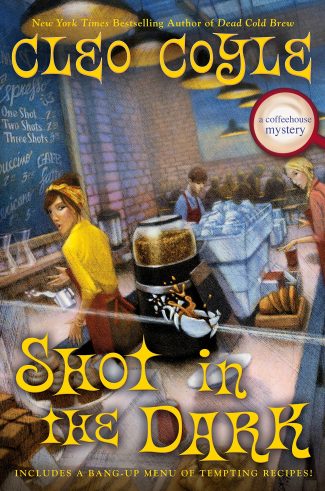 Shot in the Dark

Shot in the Dark by Cleo Coyle is the 17th book in the Coffeehouse Mystery series A new smartphone dating game turns the Village Blend into a hookup hot spot, until one dark night, when a gunshot leaves a dead body behind and the landmark coffeehouse becomes the center of a whole new scene—a crime scene.

Shot in the Dark, the 17th entry in Cleo Coyle’s coffeehouse mystery series starring Village Blend owner Clare Cosi, takes a cue from modern dating apps and all their attendant chaos in the lives of those looking for love and lust. The novel opens with Clare’s single-and-ready-to-mingle ex-husband, Matteo Allegro, using the app Cinder, which just so happens to rhyme with one of the most popular hookup apps in real life. But with Cinder, the women—known as Cinder-ellas—make the first move on the Cinder-fellas, complete with a Tinker-Tinker noise when contact is made (a nod to Tinkerbell).

Soon after Matt’s explains the intricacies of the app, which is also being used by Clare’s octogenarian boss and former mother-in-law, the elegant Madame Dreyfus Allegro Dubois, the coffee shop becomes social media famous when a Cinder-inspired holdup happens inside.

A slender woman stood near the middle of the room. She was about my daughter’s age. Her white silk blouse looked virginal over her pink flowered skirt. Honey blond hair fell to her twenty-something shoulders.

I’d seen her several times in our coffeehouse. She seemed a shy type, always sat alone—though she sometimes conversed with Tucker Burton, my assistant manager. On those visits, her willowy arms had sported a fashionable handbag or tote. Tonight, those limbs appeared to be accessorized with a semiautomatic handgun.

The man the gun is pointed at, Richard Crest, turns out to be the kind of cad who uses and discards women, treating Cinder like his own personal playground—hence the very public outburst.

Nobody winds up injured thanks to Clare talking the woman down—save for the Village Blend, which quickly gains a reputation as a possibly dangerous hangout. Clare is rightly concerned that a location most recently occupied by an active shooter won’t exactly lure customers. She doesn’t have long to ponder her business dilemma because Madame summons her to rescue her from a date at a riverside restaurant gone wrong. That’s when Clare notices a body floating in the Hudson River who turns out to be a recently deceased Village Blend customer—and a former Cinder staffer.

This sets in motion a puzzler of a plot, full of competing dating-app coders, an over-the-top fitness guru, staged social media ambushes, and more murders. Clare jumps right into the thick of things, determined to get justice for the victims and restore her coffee shop to its former glory. She’s even willing to go undercover on Cinder as the bikini-clad hottie “Kara,” a move which provides much hilarity and a major misunderstanding when it’s assumed she’s stepping out on Mike, who’s in London working on a drug-smuggling case. Clare also gets a crash course in exactly the kinds of messages being traded on Cinder.

Within ten minutes I’d sent out a dozen Glass Slippers, reaching out to every questionable or dishonest profile we could find.

Despite the lateness of the hour—or more likely because of it—responses dropped into my box immediately. Given the dubious nature of the men I’d contacted, these replies tended to be “adult” in nature (not to be confused with mature).

I hit the next message. “This man wants to show me a picture of his bedroom.” I displayed the image.

“Looks more like a hardware store,” Esther said with a snort. “I get the dangling chains, but what’s with the John Deer riding mower?”

Clare continues to dangle her online avatar in the hopes of luring Crest to her coffee shop only to find him slumped over one of their outdoor tables, dead from a bullet delivered up close. This makes Clare even more determined to solve an escalating series of crimes, enlisting her staff’s help as they dive deep into the shady world of high-tech betrayal and greed.

This series usually has a bit of romantic angst between Clare and her fiancé, Detective Lieutenant Mike Quinn, but in Shot in the Dark, that relationship drama is transferred to Clare’s daughter, Joy, who’s distraught that her own beloved, Detective Emmanuel Franco, is cheating on her.

With its delightful blend of satire, social media, and dating-app skewering, clever detective work, and of course, scrumptious-sounding food and drink in between, this is another winner in an always entertaining series. The book also comes with plenty of mouth-watering recipes, from “Homemade Caramel Apple Cider Syrup” to “Birthday Cake Biscotti” to savory treats like a “Chicken Schnitzel Sandwich with Bavarian Beer Cheese” and a “Bacon-Wrapped Pork Loin with Pineapple.”