Review: She Was the Quiet One by Michele Campbell 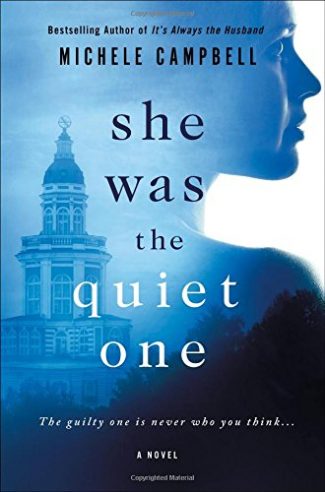 She Was the Quiet One

She Was the Quiet One by Michele Campbell is a riveting new suspense novel—full of twists, turns, and dark secrets—about privilege, power, and what happens when we let ambition take control.

I devoured this book. I have a weakness for boarding-school novels—especially boarding-school murder mysteries—and Michele Campbell’s latest effort rates as one of the best of its kind. I grew up reading Enid Blyton’s St Clare’s novels, which also featured twin sisters who go off to boarding school together, but oh how different is She Was the Quiet One from that wholesome vision of sibling relations.

The term “quiet one” could apply, in all honesty, to either of the sisters at the heart of this book. After the death of their mother renders them orphans at the age of 15—their father having passed away a decade earlier—fraternal twins Bel and Rose Enright are taken in by their paternal grandmother, a wealthy and well-bred New England Yankee whose notions of family and childrearing are a far cry from their bohemian mom’s. The twins are shocked to learn that Grandma intends to ship them off to boarding school, but Rose takes to the idea more eagerly than Bel when she realizes how prestigious Odell Academy is. Studious and responsible, Rose is eager to succeed in her new school.

Bel, on the other hand, has zero interest in being there. Sensitive and not as intellectual as Rose, she’s afraid of not fitting in. However, her striking good looks—inherited from her mom and not shared by her twin—draw the attention of a crowd of wild seniors, who quickly adopt her as their mascot. Led by Darcy Madden, these students are more interested in partying and pranks than in paperwork. Michele Campbell explains their allure for Bel perfectly:

To be inside Darcy’s circle was to be among the chosen. Most Odell kids were earnest and square, but Darcy’s friends were different. They laughed, and did wild things—bad things even—but they were bulletproof, and never suffered. Darcy and her crew hailed from old Odellian families with gobs of money. If they misbehaved, or broke rules, Mom and Dad met with the headmaster, and the kid got sentenced to counseling or, at worst, rehab. Bel had already seen this, with a girl named Mia who got suspended for alcohol the first week of school. She went home for three days, and came back smiling, with a tan, a new pair of Saint Laurent boots, and a fifth of bourbon that they drank the same night in Darcy’s room. Life in Darcy’s circle was a big joke. The terrible pressures of Odell—the crushing workload, the college-admissions race, the insane three-hundred-page code of conduct manual—vanished at the flick of Darcy’s shiny, blond hair. Bel needed to be part of that. It wasn’t the money that turned her head, or the privilege. It was the freedom from fear.

As Darcy’s influence on her grows, Bel finds herself at odds with Rose, to the point that the sisters’ relationship frays almost to the breaking point. Rose seeks advice from her dorm advisor, the kindly Sarah Donovan, but Bel turns for solace to Heath, Sarah’s husband, the charismatic dorm head who seems determined to save Bel from Darcy. But as their relationships grow ever more tangled, as passions flare and pressures rise, the sisters find themselves in violent circumstances that only one girl will survive.

Half of the suspense of this novel is trying to figure out who died. Ms. Campbell writes masterfully in a structure reminiscent of Liane Moriarty’s Big Little Lies, and once the mystery of which sister has perished is solved, the mystery of who really killed her takes on greater import. I spent large chunks of the book dreading the many possibilities of who had died and who had done it, and I raced to the end to find the answers. I was constantly second-guessing myself, just as Rose does when she gets the messages that lure her out to the secluded lake that borders the academy:

And yet … as the minutes ticked away, as Rose messaged Bel several times more and received no reply, as she dialed Bel’s phone and got only voicemail, she began to think she had no choice [but to go]. Bel was the only family she had left in the world—other than Grandma, who didn’t think much of Rose, and would think even less if she failed to help her sister. She had to find Bel.

Rose put her coat on. Then she had second thoughts, and took it off again. Bel couldn’t be trusted. This was a scam. Bel was trying to get Rose in trouble, or get her alone […] Rose shouldn’t fall for it. She should look out for herself, and stop worrying about Bel. Everything that happened to Bel was her own fault anyway.

But what if Bel was in real trouble?

The push-pull of the sister’s relationship is one of the many strengths of this intense, suspenseful novel that had me quietly freaking out right until the very end. I wonder, though, if the epilogue was meant to mitigate some of the killer’s guilt. I actually felt more disgusted with the murderer after reading the epilogue than otherwise, though I’m glad that it tied up the few loose ends of the plot.

She Was the Quiet One is a really great addition to the boarding-school mystery genre and a terrific examination of sisterhood, with two very different protagonists at its heart. It’s a bit of a heartbreaker—Ms. Campbell writes the girls’ interior lives so well that it’s hard not to feel compassion for both and want them both to have survived—but I found the book wholly satisfying regardless.

Read an excerpt from She Was the Quiet One!