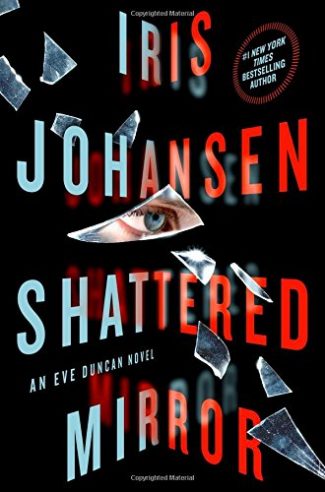 Shattered Mirror by Iris Johansen is the 23rd book in the Eve Duncan series.

In this 23rd installment of the Eve Duncan series, author Iris Johansen brings a tale of murder and family ties—even if that family isn’t blood. Duncan is a forensic sculptor that brings the skulls of the dead back to life to tell their tales. It’s an interesting career, to be sure, and Johansen writes it with ease. The story begins when Eve is gifted a particularly gruesome skull by an unknown person. It soon spirals into a personal matter that leaves herself and her loved ones in great danger.

Being new to this series, I didn’t bring any expectations or prior knowledge to the table, and I didn’t seem to struggle with this at all. There were ample backgrounds available to each character in order for me to piece storylines together if need be. I found myself really liking the character of Jock, the ex-assassin that’s not too hard on the eyes. His loyalty to Cara and general badassness pulled me right in. Their particular struggle with Cara coming to terms with her newly acknowledged feelings toward him was just all right, but it seems to be a longer, growing story arc that will be handled going forth.

One thing that kept coming back to nag at me throughout reading this story was Eve’s six-year-old son, Michael. The way he spoke, thought, and just generally acted all together didn’t add up. Johansen presents him as different and unique, but he’s still supposed to be six years old.

“You know how smart Michael is. So give him a little time to work this out for himself.”

“He’s only six, Joe.” Her words were muffled against his chest.

“Going on thirty. You’ve always known he’s not like other kids.”

Yes, she’d known from the time Michael had been conceived that he was wonderful and special and he had never disappointed her. He was super intelligent and had the sweetest nature on the planet. But that didn’t mean it wasn’t her job to keep on protecting him.

At times, he has more prescience and wisdom than some adults I know. I fought over even bringing him up, but it seemed to grow as the story unfolded. She does add in little thoughts about how he is so different, but it’s still a hard pill to swallow.

There was also an overtone of the paranormal at times. I love this subject, and I pretty much jump when I see it’s included in a book. This was a surprise, and it’s not overtly so. There are psychic connections between Eve and her deceased child, between Eve and Michael, and even somewhat between Darcy and her deceased twin sister. Also, the mention of ghosts occurs briefly when bringing up these incidences, and there’s even a mention of a southern cryptid.

There are so many ways to die in this swamp. Drowning. Coral snakes. Some say there’s even a swamp monster sighted around here called a Rougarou.

It doesn’t go much past this, but still, I was pleasantly surprised!

I really enjoyed Eve as a character. She’s a strong female protagonist that is able and fiercely loyal to her loved ones—both blood and otherwise. Her heart is immeasurable, and at the same time, she doesn’t hesitate to do what she feels is right to defend and protect. Her unusual and fascinating gift of recreating skulls by way of clay is also quite amazing. As an artist, I really enjoyed this aspect of the story. But the truth behind it is not so romantic. She’s recreating faces for the ones who cannot speak for themselves. It’s morbid but also necessary and very important work. Where we might see a macabre scene when she receives a skull, she sees hope and promise to avenge the dead—as summed up in one of my favorite lines:

But skulls were never a horror to her, the horror was when monsters reached out to make them that way.

Shattered Mirror was a fun read filled with plenty of action and mystery. The characters were well fleshed out and the emotions ran high. The villain was despicable, as he should be. Eve Duncan did not disappoint!