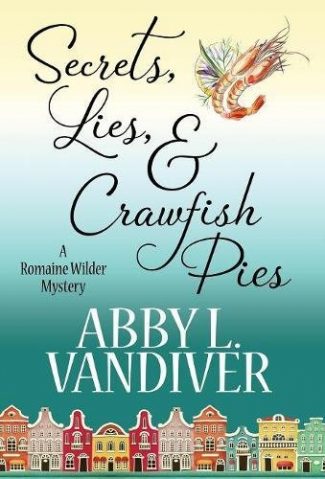 When I was a teenager, there was a radio DJ named Bruce Morrow who called himself “Cousin Brucie” because, as he explained, “You can choose your friends, but you can’t choose your relatives.” But if I could choose my relatives, I would certainly choose 82-year-old Auntie Zanne, aka Suzanne Babet Derbinay, who owns the Ball Funeral Home in Roble, Texas. But alas, Auntie Zanne—who has a delightful way of driving everyone slightly crazy—is already taken by Romaine Wilder, a former Medical Examiner in Chicago who may have to slink back home to East Texas after losing her job.

When the story begins, Romaine is having a small gathering of Chicago friends and colleagues at her “Here’s-To-The-Next-Chapter-in-My-Life” party. And of course, Auntie Zanne has come all the way from Roble to celebrate. When Zanne draws a little too much attention from the crowd of sophisticates, it makes Romaine nervous. She pulls Zanne aside:

“You know I have a different kind of life up here,” I said, my eyes darting around the room to make sure no one was listening. “I’ll never get the job I want in this city if one word gets out about you!”

“You won’t have to worry about that,” she said matter-of-factly. “You won’t be around them–or here–much longer. Mark my words.”

I flinched as that phrase leapt from her frosted, rose-colored lips. I didn’t know why she thought I wasn’t going to be around much longer, but I did know whenever she made such a pronouncement, somehow, whatever she was referring to eerily came true.

“I just bet,” I said, nervously shaking off her warning.

I licked my lips and tried to muster back up a little bluster. “I saw you talking to the Chief-of-Staff over there-”

She cut me off. “Is that his name?” Nose scrunched, she acted as if she smelled something bad. “Chief-of-Staff?”

“How am I supposed to know that?” she said. “That’s all you call him every time you talk about him.”

I blew out a breath. “Dr. Hale,” I said. She rolled her eyes. “Okay. Alexander Hale.” Her eyebrow arched higher. “Alex,” I surrendered, lowering my voice. “I need a recommendation from him–from Alex, if I want to get a prominent position in another hospital. He has connections. I hope you haven’t ruined that for me.”

At forty-ish, I didn’t want to start all over in my career.

“I don’t think I have,” she said measuredly. “I think you’ll be fine.” She patted me on my arm and turned to step away.

I pulled her back. “What did you say to him?”

She turned her head up to me, pulled me in close like she had a juicy secret, and nodded knowingly as she spoke. “I prepared a truth serum.”

Now you get it—why I want an Auntie Zanne for my very own. If she can prepare a truth serum, imagine what else she could do to make life easier for her favorite niece—me. Oh, but that’s right, she belongs to Romaine. So I guess I should tell you that Romaine is not nearly as happy as I would be at the idea of the truth serum and is totally flustered by what Auntie Zanne tells her next. Even I couldn’t believe how clever Auntie Zanne is!

Needless to say, Romaine doesn’t find the job she longs for in the Windy City, so it is back to Roble with Auntie Zanne. But their homecoming is not quite what they expected. After a long train ride from Chicago to East Texas, the last thing Romaine expected to see was a Sheriff’s car with lights flashing in front of Auntie Zanne’s funeral parlor. Since Romaine’s cousin Pogue was the sheriff, Romaine kind of hoped that he was just part of a welcoming committee of some sort. But Auntie Zanne got right to the point.

“What’s going on?” Auntie Zanne asked Pogue, raising her voice over the wind and rain. “What are you doing here?”

“There’s a dead body in there,” Pogue said, pointing through the double glass doors. He pulled off his hat and brushed beads of water off it.

“Of course there is,” Auntie Zanne said, sucking her tongue and rolling her eyes. “It’s a funeral parlor. I’ve got lots of dead bodies in there.”

“Only this one…” Pogue said, his voice getting louder over the bash of thunder and a crackle of lightning, popping as it smacked the ground, “…was murdered.”

Although Pogue is family, and Romaine is very loyal to family, she knows that he won’t be up to solving a murder. And she also knows that nothing will stop Auntie Zanne from finding out who the murder victim is and how his body wound up in her funeral parlor.

So follow along with Romaine and her family and friends as they struggle to identify the victim, find the killer, and restore order to their tiny Texas town. Oh, and I am not quite sure, but there may be a bit of romance in the air. Can’t wait for the next book in the Romaine Wilder series.