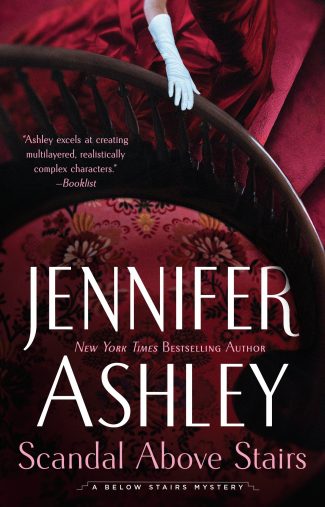 Scandal Above Stairs by Jennifer Ashley is the second book in the Below Stairs Mystery series, where a mystery of stolen antiquities has Kat Holloway setting aside her apron once again for the intrigues of the upper echelons of Victorian London.

Jennifer Ashley’s Kat Holloway mysteries standout as a fantastic series. The heroine is a professional cook. It’s not a hobby; it’s her livelihood. Her status in the aristocratic Victorian household where she works is on par with the butler and the housekeeper. As a professional courtesy, she is referred to as Mrs. Holloway. When she dines, she’s waited upon by the household staff. Why is this important? It means Kat has more autonomy than most Victorian women. She controls a budget, leaves the house to purchase comestibles, and unusually (but vital to her), has two sacrosanct days off—half-day Monday and all of Thursday. Independence indeed. Kat treasures her time off because it allows her to see her daughter Grace.

My daughter and I always made a special outing when I visited, and that day we’d gone to look at exhibits in the British Museum. Quite a few antiquities had been flowing back to London these days from archaeological digs in Egypt, Greece, Rome, and the Near East, and ladies and gentlemen flocked to see them—mummies, sarcophagi, and little dolls that had accompanied the ancient Egyptians into their tombs; as well as more cheerful things like vases, jars, and combs from the civilizations of Greece and Rome, and tablets of writing only scholars could read.

While we’d stood waiting to enter the building, I’d sworn I’d seen the face of a man I knew. His name was Daniel McAdam, a gentleman I’d come to look upon as a friend—a very close friend.

A couple of big clues here to the plot: Egyptian treasures and Daniel McAdam will figure prominently. Continuing with the allure of Ashley’s mysteries, Kat Holloway’s circle expands to include new characters. As in Death Below Stairs, they come from all walks of life. There’s Tess, a destitute, street-savvy young girl whom Kat takes on and trains as a kitchen assistant. Then, there’s Kat’s professional circle: the cooks at other aristocratic houses. Plus, the friends of her unmarried employer, Lady Cynthia, who champs at the bit to throw off the shackles that restrain the wives and daughters of the aristocracy. Even with new faces, the focus of Scandal Above Stairs remains firmly below stairs.

Lady Cynthia’s dear friend Clemmie is accused by her baronet husband, Sir Evan, of arranging for precious artwork to be stolen from their house. Lady Cynthia begs Kat to solve the mystery, immediately! She implies that Clemmie will be eternally grateful.

The thought of extra was always welcome, of course, something to put by for my daughter—but that was not why I nodded in agreement. The puzzle did make me curious. Besides, looking for missing paintings seemed far less dangerous than hunting murders or chasing Fenians.

Sometimes I can be a foolishly confident woman.

Kat’s knowledge of best-practice cooking techniques, her ability to sally forth and investigate—these characteristics are essential components of her crime-solving casebook. Spoiler alert: a gentleman is poisoned during a dinner party, and Kat happens to be below stairs. The police are ready to arrest the cook. Hold on. Kat shouts at Detective Inspector McGregor from Scotland Yard that “the meal was not to blame.” Not surprisingly, he asks her how she knows that.

“Because I was here,” Might as well stick my head into the lion’s mouth. “I made most of the meal in question, and there was no harm in it. You should be looking for the culprit above stairs, not below.”

Scandal Above Stairs is anchored by the practical and mundane. Kat’s job is to ensure that everyone in the household is fed. Nutritious, delicious meals must appear like clockwork or else she is out of a job. Her strategies are quick-witted and endearing; she is competent to the core. Even distracted by a corpse discovered in a seedy pawnbroker’s shop (Daniel McAdam has gone undercover as a pawnbroker), Kat tells Tess that they’re “really going to the market,” even though they’re very worried.

“By a dead body?” Oh aye, missus, I’d say that was distracting. What are we going to do about Mr. McAdam?”

“Everything we can.” I shivered, and not because of the wind. I wanted to find Daniel, make certain he was all right. “But if we wish to keep our places, we will get the master and mistress their midday meal.”

Jennifer Ashley’s plots expand readers’ familiarity with the important issues of the day. Scandal Above Stairs finds Greek antiquities disappearing from the homes of the upper-crust and from museums. Ashley references the dispute over the Elgin Marbles, a bone of contention between Great Britain and Greece to this day. The Kat Holloway mysteries capture the roiling social changes in Victorian London through the intriguing lens of a woman chef and sleuth. Kat is marvelously adept at both roles.