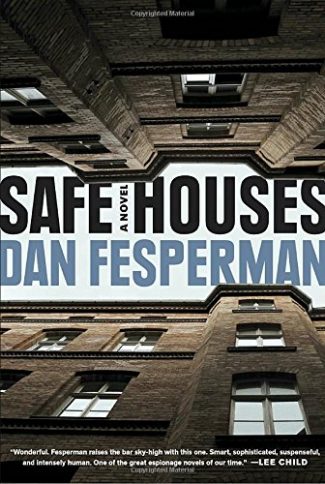 Safe Houses by Dan Fesperman is a gripping suspense novel where a young woman discovers a nefarious truth at the heart of the CIA’s operations in postwar Berlin and goes on the run for her life until, years later, she’s gruesomely murdered along with her husband, and her daughter begins to chase down the startling secrets from her past.

Dan Fesperman is no stranger to thrill and intrigue. A longtime war correspondent with tours in Baghdad, Sarajevo, Berlin, and Kabul, his work is layered with the particular hues of darkness that can only be found in the shadowy gray line between good and evil. He came late to fiction but is no stranger to success, having won the John Creasy Memorial Dagger Award for Best First Novel, The Ian Fleming Steel Dagger Award for Best Thriller, and The Hammett Prize. Safe Houses showcases a lean, muscular prose that is able to deliver plot points as cleanly and quickly as a switchblade’s twist.

The success of Fesperman’s novel depends on our understanding of what a safe house is both in real life and in metaphor. A safe house can be found being operated by a friendly government in an unfriendly place and is often, as its namesake indicates, a safe place to hole up or do business. These are usually places that blend into the neighborhood and could easily be the home of a model neighbor who doesn’t make noise or cause any problems. A safe house remains safe as long as the enemy doesn’t know where it is.

Helen Abell is a young agent working for the CIA in the 1970s. The Cold War is on, and nowhere is the dark spotlight of intrigue brighter than in Berlin. But young women in the 1970s were supposed to know their place in the world’s intelligence community hierarchy. You could be a secretary or an archivist or even a safe-house keeper, but you could never be an actual agent who deals with the supposed masculine business of intrigue. Unless, of course, the intrigue is thrust upon you during your boring job of maintaining a safe house when you have two unplanned encounters: one that clues you into a global mystery and another that makes you an accessory to the murder of a young woman. For Helen Abell, both of these are true, and she soon finds herself at odds with an agency who would rather her sit behind a desk than solve one mystery, much less two.

Fesperman’s safe house is also a rural home in Maryland where a family of four grew up, with the mother, father, and son still living there. It’s not merely a house; it’s a home. And it’s a place where violence should only be visited by television or movie stars. But when the mother and father are brutally murdered and it’s believed that the son committed the crimes, the house no longer can be categorized as safe.

This is where Safe Houses gathers steam as the two stories, interwoven through time, begin to collide. As Helen unravels her own clues to become the agent for which she was trained while dodging those who would bureaucratically stop her, her daughter must find the true murderer of the couple in the rural Maryland home, gaining the attention of the same people who had been after Helen all of these years.

The strength of Safe Houses relies on the author’s deft handling of spy-jinx. The story isn’t bogged down with tradecraft or explanations of how things work. But that’s not to say that one is left wanting more, either. Fesperman uses just enough to progress the plot and keep us wondering what he’s going to do to our two heroines next.

The novel’s strength also lies in its historical and cultural context. The plot is awash with the grit and desperate grime of Soviet East Germany, the free-for-all that was West Germany, and the constant cat-and-mouse spy-jinx perpetrated by both the East and the West. Each dive into the old Cold War culture is fresh, with enough description and realism to enthrall me with the historically fascinating past while avoiding the bogging of encyclopedic descriptions.

Fesperman’s exhaustive research shines through with crisp dialogue and believable characters. In order to depict what being a woman in the CIA was like in the 1970s, he not only conducted multiple interviews but also dove into the musty CIA archives to decode what the working life was of women in an agency at the forefront of the democratic battle against communism.

Although initially concerned with his split narrative between past and present, his jumps were so clean and I was so intrigued by the linked plot of both of his strong heroines that I didn’t mind his dual narrative at all and found myself eager to return to each of their dovetailing stories. He kept me guessing all the way to the end and finished with another nice twist of his narrative switchblade. I’m definitely a new fan; read Safe Houses and you will be too (if you aren’t already).