Review: The Rules of Backyard Cricket by Jock Serong 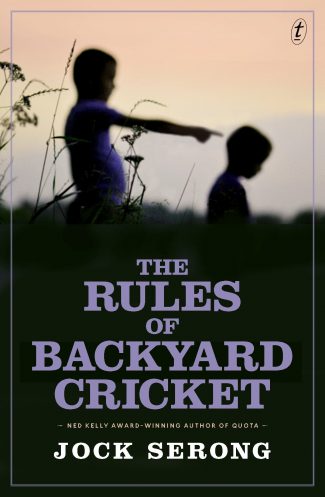 The Rules of Backyard Cricket

The Rules of Backyard Cricket by Jock Serong is a novel of suspense about family, sport, celebrity, rivalry, masculinity and the high price of getting everything you want.

I was devastated by the ending of this book but not, perhaps, how Jock Serong wanted. As a mom and as a sports fan, it was very hard to accept what happened in the final scene of this intelligent, gripping noir thriller—a story of two brothers who grow up to be sports stars but lose themselves in the process. I was just so mad at Darren, and I’m pretty sure that wasn’t how I was supposed to feel.

Darren is our narrator, the younger brother, the bad boy. Wally is the more contained and composed older brother. Raised single-handedly by their beloved mother when their footballer father ups stick and disappears, the Keefe boys spend endless hours practicing cricket in their Melbourne backyard, a setting for bonding and battling both. The boys are laser-focused on becoming professional cricketers, but poverty too often gets in the way. Their mother does her best, but the boys are happy to do what’s necessary otherwise, pilfering tennis balls that have gone rocketing out of the nearby ladies’ tennis courts to use for cricket, in a passage that also serves to illuminate the differences between them:

Morally, to [Wally], the theft of the balls was excused by sporting necessity: a matter of subsistence. He could rationalise it that way, and liberating the odd Slazenger from the ladies was a whole lot different than, for example, badging their cars. Which was something I did without regret.

And right there you have an essential distinction between the Keefe brothers. I would do these things for the sheer joy of it. Busting free, sending my blood roaring in the knowledge I’d flouted the rules and disappointed expectations. The problem for me is that the more times you do it and the more you get caught, the lower the expectations become. Correspondingly, the lesser the thrill.

The brothers are both immensely talented, but as they get older, their career trajectories begin to diverge. Wild child Darren runs with a rough, hedonistic crowd, whereas Wally is his sober, upright opposite, settling down early with a wife and daughter. The sordid history that leads to Darren being thrown into a car boot, a bullet through his knee and on his way to certain death as The Rules of Backyard Cricket begins, shows how the brothers’ lives, though different, are inextricably intertwined.

Again, as a sports fan and a mother, this was a really hard book for me to process. It reads very quickly, with solid prose and convincing dialog. The Keefe family dynamics are riveting and heartbreaking. I’ve never been a cricket fan—and alas, this book likely won’t persuade me otherwise—but I both enjoy watching professional sports and reading about them, which is partly why this speech Darren is given by a match-fixing criminal actually hurt me in the heart:

‘Do you know I heard the Pope the other day going on about corruption in sport. The fucking Pope. Goes to show, doesn’t it? Sport goes to the heart of everything. If you can reach inside it and fuck with its innards, you’re actually messing with society, Daz. How ‘bout that? Bigger than drugs. Bigger than hookers and porn, because people shy away, they can smell the desperation. But the same people will go on consuming sport long after they know it’s rotten to the core. They’re insatiable. And it levels people like me with people like you. Cos you can play it, see, or you could. But I can play it. And I can keep playing it long after your thumb takes you out of it, or some other guy’s knee goes, or his back goes. It’s a whole-of-life career for me.’

The Rules of Backyard Cricket is a must-read for sports fans, even if, like me, you don’t understand this particular sport. The novel speaks to the place organized sports has in the modern zeitgeist, displaying unpalatable truths both about society’s fascination with the subject and with the kind of masculinity it both encourages and discards when the players can no longer entertain. I like to think that things are getting better (I mean, even the Pope has weighed in!), and books like this will definitely help push it in the right direction.

Above all, though, this is a damn fine noir thriller. I don’t necessarily believe what Darren was told regarding his niece towards the end there, but that sort of ambiguity—the inability to believe what anyone, even the narrator, claims—is the hallmark of the genre. I wanted both to shake Darren and to hug him. He’s going to haunt me for as long as the truths laid out in this book will, which is going to be for a very long time.