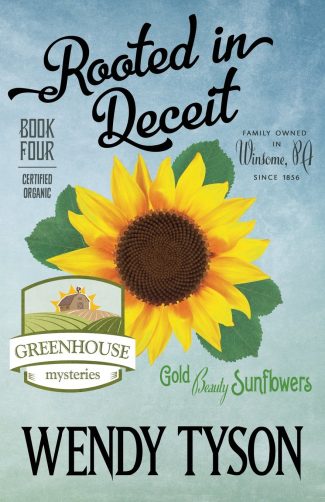 Rooted in Deceit by Wendy Tyson is the fourth book in the Greenhouse Mystery series.

Critically acclaimed author Wendy Tyson’s background in law and psychology inspires her mysteries and thrillers. Originally from Philadelphia, she now inhabits a micro-farm there with her family and four-legged friends. Wendy’s short fiction has appeared in literary journals, and she is also a contributing editor and columnist for the International Thriller Writers’ online magazines, The Big Thrill and The Thrill Begins. Her two series include the Allison Campbell and Greenhouse mysteries; her newest, Rooted in Deceit, is the fourth title in the latter.

As the story begins, lawyer-turned-farmer Megan Sawyer is looking forward to the grand opening of her newest business venture in Winsome, Pennsylvania—a wood-fired pizza barn-restaurant. It’s the brainchild of her friend and farm manager, Clay Hand, and one that promises new revenue while also repurposing a piece of property with a harrowing history. Adding to the excitement is the fact that Megan’s father, Eddie, is in town with his Italian wife, Sylvia—a singularly focused businesswoman who exudes a snooty sense of sophistication. Rather than staying on the premises, however, the two take a room at the swanky new Peaceful Summit Yoga Retreat Center and Spa, located just outside of town, where Sylvia expects to secure artwork for her Milan boutique. What she doesn’t anticipate is becoming the suspect in a murder investigation.

No stranger to crime, Megan is drawn into the case to help clear Sylvia’s name. Easier said than done, however, as Sylvia was seen arguing with the victim—a local artist on the rise, Thana Moore—on the morning of the murder and has no alibi for the time during which it occurred. It’s a sensitive situation, and one that puts Megan in a precarious place; not only is she Sylvia’s begrudging advocate, but Thana Moore was her onetime BFF before an adolescent love triangle tore them apart. Coincidentally or not, Ray Cruise, another point in that triangle, is co-owner of the Center, necessitating an uncomfortable reunion. Ray is adamant that Thana’s ex-boyfriend, alleged to have been both abusive and possessive, deserves a closer look. Despite such suspicious behavior, the authorities remain focused on Sylvia—and later, Maria Hernandez, the beloved wife of Megan’s ornery chef, Alvaro—as their primary persons of interest.

The circumstances demand a melding of the personal and the professional, which allows the author to explore both past and present events as Megan attempts to reconcile the two. Not only does Thana’s murder provide the impetus for introspection but it brings Megan’s grief over her husband’s death back to the surface; while she’s finally found happiness with a new beau, veterinarian Daniel “Denver” Finn, this development threatens to cloud her judgment. Further, Megan’s complicated feelings toward her father—who requires more parenting than he seems capable of giving—are only exacerbated by Sylvia’s divisive presence (not to mention her grandmother Bibi’s ongoing coddling of him). Then, there’s the worry that her business won’t be able to withstand competition from the Center. Admittedly, it’s a lot—but it all serves the plot while revealing backstory and allowing characters to grow organically (if you’ll pardon the pun).

Once again, Wendy Tyson masterfully draws readers into the comfortable charms of Winsome only to show that this seemingly idyllic town, and its colorful cast of characters, is far from impervious to the influences of the outside world. Though entirely satisfying as a standalone, Rooted in Deceit also makes good on resolving a compelling cliffhanger from last year’s entry, Seeds of Deception. Finally, the book serves as a reminder that farming is (usually) honest work and that getting one’s hands dirty—like turning up truth—often results in an unexpected bounty.