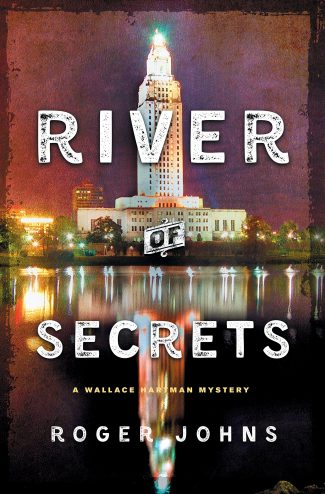 River of Secrets by Roger Johns is the second book in the Wallace Hartman Mystery series, where a controversial politician is murdered in cold blood and Baton Rouge Police Detective Wallace Hartman struggles to find the killer amid conspiracies and corruption.

Herbert Marioneaux was a Baton Rouge politician with a checkered ideological past. Once a strict segregationist, his more recent political leanings had been reconciliatory, leading to charges of insincerity and opportunism from political and social opponents across the spectrum. Regardless, he was a popular state senator from a rural parish and hardly the kind of person expected to be found brutally murdered in his home near the state capitol building.

Detective Wallace Hartman is put on the case, and everything seems to be fairly open and shut given that an abundance of DNA is found in the form of hairs attached to the back of Herbert’s shirt. But when the DNA is identified as belonging to Eddie Pitkin, things get a lot more complicated.

Eddie is a former attorney who found a new path as an activist confronting the moneyed and prominent white citizens of Baton Rouge and pressing them on the issue of slavery reparations. There doesn’t seem to be any direct link between him and Herbert—and there’s certainly no reason for him to have murdered the state senator. But race relations in America, and particularly the deep South, being what they are, public tensions are soon aflame after Eddie is brought in for questioning. Worse still, Eddie is the older half-brother of Craig, one of Wallace’s oldest childhood friends. Eddie and Craig are long estranged, but that doesn’t stop Craig from showing up on Wallace’s doorstep to ask her to keep digging, particularly since Eddie had been at Craig’s lake house at the time of the murder. Wallace wants to know if there are any corroborating witnesses for this rather thin alibi:

“Not that we know of,” Craig said, lowering his voice. “He says it was just him and a cooler full of food and beer. He got there on Friday afternoon and didn’t leave until Sunday morning. The only place he went was to and from the house and the dock out back, so unless somebody just happened to be doing a field study of the neo-bourgeois southern Negro infiltrating the age-old habitat of the light-skinned rural cracker bird, then it’s just Eddie’s word against a couple of very inconvenient hairs.” Craig pulled his glasses off and rubbed the spot between his eyes with the heel of his hand.

“Craig, do you have to talk that way? You know it creeps me out.”

“What can I say?” His gaze was steady, but his voice was not. “If it takes a case of the creeps to keep this investigation going—until things get set right—then so be it.”

Discomfort as a goad to action is used often in River of Secrets, ranging from the relatively mild language used by Craig to far more nefarious actions undertaken by secret assailants at Wallace’s expense. It gets to the point that Wallace herself has to go on the run, stashing her boyfriend, Mason Cunningham, in a safe house while she tries to figure out if there’s a leak at the Baton Rouge Police Department who is compromising her investigation. Unsure of who to trust, fearful for the safety of her loved ones, and suffering from a possible concussion and a definite lack of sleep, she finds herself questioning her entire lifestyle:

The first thought to disturb the newfound quiet took her by surprise. Besides herself, not one blessed soul on the entire planet knew where she was at this moment—in a strange neighborhood, in the middle of the night, driving around with no destination in mind, with a  blinding headache courtesy of a man who had cracked her in the head and then disappeared.

What kind of life was this that she was leading? What kind of person spent her time chasing after people who hated her, while taking elaborate measures to isolate herself from the people she loved and who loved her? The wisdom of Mason’s words from the night before, urging her to think about everything that was at stake, seemed so obvious.

Fortunately, this introspection leads to a break in the case—or unfortunately, as Wallace realizes that solving Herbert’s murder could explode the very foundations of her life for good.

Roger Johns’s second novel is another thrilling police procedural that isn’t afraid to look at the harder political questions that confront our modern era as well as at how these conflicts have their roots buried deeply in a past that some would kill to keep unexposed. The account of a legal system at the mercy of politics is convincing, as are the internal workplace dynamics of Wallace’s precinct. Most outstandingly, the way Mr. Johns weaves Wallace’s personal life into the sensational but otherwise seemingly routine homicide is a study in heartbreak. Highly recommended, especially for readers wanting an unflinching look at the insidious way racism permeates modern American life.

Read an excerpt from River of Secrets!